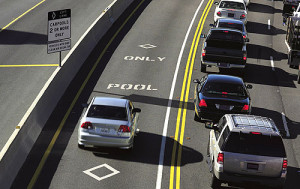 I’m obsessed with the ride-share revolution sweeping the nation.

My interest was piqued last year during a phone call with Nick Allen, a member of my CALinnovates Advisory Board.  Nick told me that he was in the process of winding down his fund at Spring Ventures, which would allow him to focus his energy on a new business he founded with Sunil Paul.  The new venture, called SideCar, launched in San Francisco last June.  Four months later Allen and Paul raised a Series A round of $10 million from Lightspeed Venture Partners, Google Ventures, SV Angel, Mark Pincus, Lerer Ventures and a convoy of other prominent angels and VCs.  The A round allowed SideCar to expand well beyond their launch city of San Francisco.  SideCar now serves passengers in Seattle, Austin, DC, Philly and, now, thankfully, the City of Angels.  Competition abounds, mostly in the form of Lyft, another Bay Area-based purveyor of ride-shares.  You simply can’t miss Lyft’s cars driving around the city due to its clever marketing ploy of placing big, pink “carstaches” on the grill of each car in their fleet.

SideCar and Lyft are mobile apps operating in a sector known as the sharing economy where a driver with an empty seat in their car can offer it to someone headed in the same general direction.  The overarching idea is based upon the well-known problems facing the economy and the environment – a constraint of resources.   Allen tells me that he and his team realized that car ownership is down, gas prices are up and far too many drivers are cruising the streets alone, which causes more traffic and increases carbon emissions.  In essence, ride-sharing is carpooling with a technological twist.  It’s not much different from all the times I bummed rides from friends in high school for gas money.

The concept seems simple, but the regulatory framework facing the industry is daunting, making it difficult for companies such as SideCar and Lyft to maneuver.  As such, my initial enthusiasm about the service was somewhat tempered by the stark reality that it could be viewed by regulators as bait-and-switch, with drivers describing their service as ride-share, but in reality offering on-call taxis for hire.  One Quora member asked if ride-sharing services are legal, likening them to “unlicensed gypsy cabs.”   Statements such as this show a clear misunderstanding of the technology, its inherent benefits and the application – or misapplication – of antiquated laws to contemporary innovation.

Paul, SideCar’s CEO, leads the charge against the likelihood of such misconceptions being applied to his company.  He calls SideCar’s service “matching” rather than “dispatching”, saying SideCar is to Match.com as taxis and Uber are to an arranged marriage.   It may sound like semantics, but it’s not.  It’s a critical distinction about consumer choice that must be understood by members of public utilities commissions, legislators and consumers alike for the industry to grow and thrive.  Says Paul:

Matching allows riders and drivers to post their information and choose (or decline) a match.  Each party has choice and destination is required.  Riders know ahead of time the routing, suggested payment, so the experience is more certain.  They have a choice of which driver will see the request, giving them more control.  Drivers know where the passenger is going, so they can match it to their own needs, allowing them control over their routes and passengers.  Drivers have more control and choice over which passengers they will accept.  It also uniquely enables reduction in pollution and congestion.  Dispatching requires a driver to show up at a pickup point and then the rider directs them where to go.  Neither party has much control or choice.  There are other differences, but “match” vs. “dispatch” is one significant one that makes SideCar more certain, more safe, and more sustainable.

I can vouch for Paul’s assertions.  I used SideCar last week to get a ride from Santa Monica to Westwood.  I asked my driver point-blank if her services were any different from that of Yellow Cab.  Her answer surprised me, because I had anticipated a response that it’s the same and that she does this as her job and sole source of income.  To the contrary, she told me she was actually on her way to her office in the South Bay and that my pickup and drop-off coordinates fit perfectly into her commute.   She drives because she meets interesting people, gets to talk business with them and often gets bored driving alone.  Her car was clean and smelled good, I liked her tunes and she took a great route.  My driver validated the simple elegance of the SideCar solution and the legitimacy of the ride-share revolution.  SideCar isn’t a trick to evade government regulation.  It’s the real deal and a leading technology in the ever-growing arsenal of the sharing economy.

I downloaded my free app in the App Store, but you can also find it on Google Play.  Next time you’re looking for a ride in the greater Los Angeles area, try clicking SideCar.