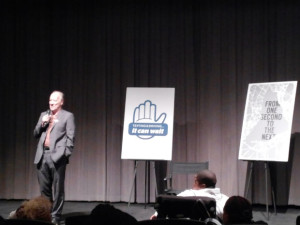 In West Hollywood, Los Angeles last night, Werner Herzog’s new documentary, “From One Second to the Next” premiered at the Silver Screen Theater located within MOCA’s Pacific Design Center followed with Q&A from the legendary director himself. As part of the “It Can Wait” movement, sponsored by AT&T, Verizon, Sprint and T-Mobile; this film won’t be shown in any theaters but screened across over 40,000 high schools  as well as being made publicly available on YouTube.

While the crowd mingled, there was also a virtual reality driving simulator where one could try and test their texting while driving skills. Think you can text and drive? Think again. It’s harder than you might imagine. This video game puts you in the passenger seat while intermittently sending text messages to a smartphone attached to the side of the chair. As you’re driving along, you have to pay attention to various obstacles and signal lights while also responding to a series of text messages. Drive too slow and a cop will cite you for that as well. 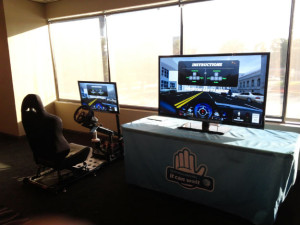 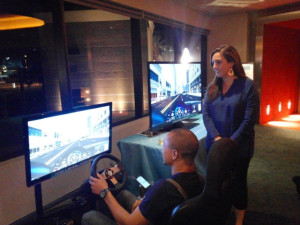 Clearly recognizing the dangers of texting while driving, AT&T smartphones now feature DriveMode®, an app that helps curb texting and driving.  The app can be set-up to automatically send a customizable reply to incoming messages once a vehicle starts moving 25 mph. The auto-reply message is similar to an “out-of-office alert” and can reply to texts, emails and wireless callers letting your friends know that you are driving and unable to respond. 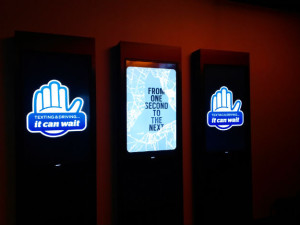 After all, what’s it worth? What is so important that you can’t wait until you’ve arrived at your destination to send that message? Or maybe you just think you’ve got super-reflexes and very coordinated at multi-tasking? “Oh, that doesn’t apply to me, I use the voice recognition feature to text” Excuses. Will that excuse still work when a moment of distraction causes you to take the life of another?