WESAWIT | Experience Events Through The Eyes of The Crowd

Morgan Rostagnat, Christopher Elwell, and Thibault Mathieu are the brains behind WESAWIT.  The mobile app and website that allows people to capture and share images and videos of events through social media.  TechZulu catches up with the three to talk about WESAWIT, startups, and the LA scene.

Thibault Mathieu:  Morgan and I were both in film school at UCLA.  The cool thing is we were not only taught about film and TV, but also about new media.  One of our teachers was teaching new media and it was really inspiring.  We came up with an idea for an app and around that time we met with Chris.  He’s the most talented developer we have ever seen.  The idea for the app is to see events through the eyes of the audience.  You take all the photos and videos and upload it on YouTube, Facebook, Vine, and other social media platforms and experience the event through the eyes of the crowd.

Morgan Rostagnat:  It first started as a news-oriented app.  Whether there was a natural disaster or a protest somewhere in the world, we would try to update all that into WESAWIT.  The app was mainly to educate people what was going on in the world.  But the news events were hard to keep up with, so we decided to cover locally and focus on events near LA.  We were initially covering events like sports and arts festivals when we first launched a beta version of the WESAWIT app at UCLA.  We decided to launch nationally shortly thereafter, but that would require a huge marketing budget.  So that’s why we decided to work with venues to create a B2B venture and start the aggregation of more online real-time content.

MR: Our goal is to engage fans with pictures and videos from the audience.  We want to bring the show to life through our mobile app, Facebook app, and on our website.  So you can feel the atmosphere of the concert or whatever event that you are watching.

Right now, we are taking content from Instagram, Vine, Twitter, and YouTube.  But the list is increasing as we are supporting more and more social media platforms.  Our most popular product is our Facebook app.  Any event or artist can add this to their Facebook page and they can see all the photos and videos from the audience.  The cool thing is, the photos and videos don’t necessarily require a hash tag, as it is mainly based on geo-tags.

TM:  Really, in one sentence we want to take fan engagement to the next level through social media.  The idea is great and has been working very well.  We have secured partnerships with the Roxy Theater, Troubadour, and Exchange LA, which is huge for us and social media.

MR:  We are also talking with other venues up north and getting calls from venues on the East Coast.  People are starting to notice us.  We offer integrations with any website or app.  We also have a white-label app, which you can use the widget on your website and it’s a social media feed where it shows photos and videos of the specific event.

Our latest product we are excited about is a dashboard that allows you to keep track of your fans.  It helps you understand who your fans are and what they do.  You can literally see through the eyes of your fans by tracking engagement through analytics and helps create fan interact by creating a contest for example.  We make it user-friendly to contact fans and reward those who share on the social media.

TM:  Our target audience is the venues right now, but we are trying to target artists as well.  To do that, we are creating tools to aggregate content from their fans to other fans.  Which we believe would be helpful for the artists themselves.

How hard was it to bring venues and other partnerships to your business?

MR:  It was all about knocking on doors.  We did not have many connections in LA, but it was all about numbers.  We sent out a lot of emails and showed them a lot of visuals of what we can do.  Once we partnered with the Roxy Theater and Troubadour, the road to getting other venues attention became a little easier for us.

Why did you switch from the mobile ecosystem to the online world?

MR:  We always had a web presence.  Whatever you see on the app, you can see on the web.  The web isn’t dead and the mobile app is still growing.  We tried only selling the app, but that was a tougher sell.  But now, we have been gaining a larger audience thanks to our online web presence.

Plan to expand beyond the U.S.?

TM:  We are an international team and using our available network is helping us push beyond the U.S.  Europe is our next target to expand towards to.

MR:  Our main focus right now, is within the U.S.  We are starting to prepare something for Europe, but once we have more support from venues, artists, and promoters nationally.

Will you do live streaming of shows in the future?

Christopher Elwell:  We did start to go down that road before.  It’s a side project for now, but we did try to have a live-stream on mobile devices before.  But right now, we are focusing on the B2B ventures and we will be coming back to that idea soon. 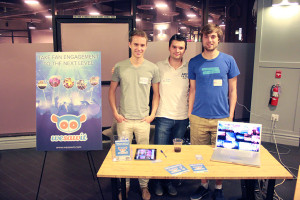 What were your biggest obstacles?

TM:  The biggest challenge was the technical side.  We are lucky to have a technical co-founder, Chris, but he is only one guy.  Since we have only one technical engineer, the amount of work was tough.

CE:  Our experiences with gathering outside contracting work have been negative so far sadly.  But outside of that, the main focus is how to get good content.  Examples would include the pictures WESAWIT receives.  We don’t want to post pictures of people’s feet or themselves in a bathroom.  We want to sort out pictures that make people see what the atmosphere of the event was like.

That is something we are still working on, to sort out all the content to get the best content.  We have different criteria to look at like hash tags and geo-tags.  We are also working with new technology that deals with computer vision to help optimize the content.

MR:  We are different by focusing on quality over quantity.  We have pretty good content already, but we are still working with new technology to help us increase the accuracy of the quality content we receive.  It would bring more people to use our product when the content is more relevant.

What are your defining moments?

MR:  Getting our first venue was the best feeling.  We were also really happy when we first launched our beta at UCLA.  The response we received was great.

TM:  The first partnership was great, because it gives us more credibility.  More venues were willing to work with us.

CE:  Just getting the app out to the public was a great feeling.

What are you main goals?

MR:  We are in growth mode.  We are trying to get as many artists, venues, and promoters on board.  We also want to increase expansion towards the east coast and have a good solid base of venues and artists in the US.  Raising money is another goal and increasing our customer base as well.

Which direction do you see social media heading towards?

MR:  Social media is everywhere and everyone is using.  Our experience with it is that the younger audience is the ones who are using it more.  Everyone is trying to understand social media and to tap into it.  There is so much stuff across each social media platform, that it’s easy to get lost in all that sea of content.  There has been a growing trend that a normal newsfeed is being posted on the social media platform.  That makes us more relevant and it’s just the beginning.

TM:  Also, it’s all about the visuals.  People have been aggregating with comments.  But with Instagram and Vine, more people have been posting more pictures and videos.

MR:  People are posting to show off.  They post pictures and videos to tell people where they are and what they are doing.  WESAWIT is using the venues to help bring a community of social media users to meet others and share their experiences.

TM:  Well we went to UCLA and loved the weather here!  Then we started to look into the LA tech scene and we can see a lot of great things going on in LA.  There are a lot of incubators and a lot of money that is starting to flow here.  The entertainment connection is readily available and getting more clients is a bigger possibility.  I mean, Venice Beach is starting to be called “Silicon Beach”.  The competition is not as big as Silicon Valley of course, but LA is going in the right direction.

MR:  The entertainment industry here is huge obviously.  But it’s how the engineer meets the artist.  The lack of competition is nice, but to be a part of the LA tech scene growth is something special to be a part of.

What advice is would you give to other start-ups?

MR:  Regardless of the city, you need someone like Chris, someone who is an amazing technical co-founder.  If you don’t have one, you will have to spend a lot of money to go get one.

TM:  You need to be persistent with your goals.  It takes a lot of your time, sometimes it hard to manage and other times it is much easier.  You just have to keep pushing.

CE:  Always have your eyes open for changing or pivoting your plans at any time.  We used to spend a lot of time on the mobile app, but now the B2B ventures have been more receptive for our business.  Our plans change constantly, but the goals still remain the same.

Thank you Morgan, Chris, and Thibault for your time.

Visit the WESAWIT webpage here.  Or see what the app has to offer for iOS and Android users.