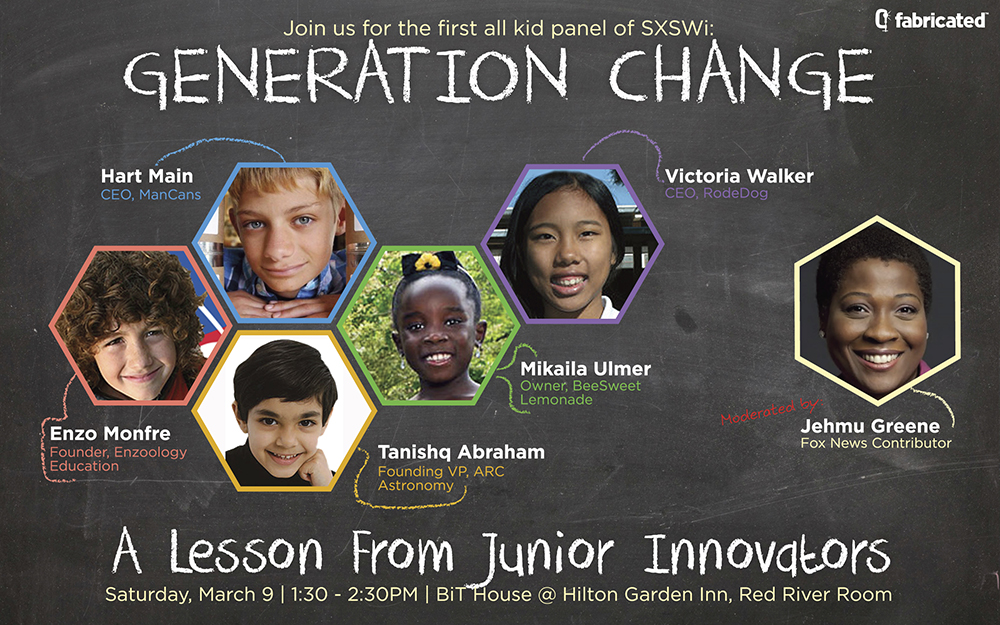 For the first time in SXSW history, young group of entrepreneurs are being celebrated for their accomplishments and have been invited to be on a panel to discuss and share their insight on problem solving, social consciousness, and making the world a better place. The panel will take place on Saturday, March 9th at the Hilton Garden Inn at 1:30pm. Organized by Blacks in Tech (BiT), a coalition of targeted technology organizations and industry thought leaders and in collaboration with fabricatedby.me, SXSW welcomes five intelligent kids with stories of remarkable success.  Titled Generation Change: A Lesson from Junior Innovators this panel hopes to explore the minds of these young pioneers. “Kids are keenly perceptive, ambitiously creative, and fearlessly bold. As we move forward in design thinking and innovation, the simplicity, purity and intense curiosity of the child mind may very well hold the key to some of the world’s largest problems.”

The panel will be moderated by Jehmu Greene, an evangelist for disenfranchised and marginalized communities and president of JSG Strategies. She will be asking the kids insightful questions such as what the world’s biggest problems are, what are the major differences between adult thinking and kids thinking and what advice do they have for aspiring adult entrepreneurs.

The following is a list of the confirmed young innovators that will be on the Generation Change panel.

Tanishq Abraham is the founding Vice President of American River College Astronomy Club. He is a 9 year old child prodigy and science enthusiast displayed exceptional intellectual abilities at a very early age. At age 7, he enrolled at American Ri ever College becoming the youngest student ever to enroll in on campus graded courses at the college.

Hart Main is a 15 year old CEO of ManCans. He founded the  company at the age of 13 with only $100 in investment making ‘manly candles’ in his kitchen after school. Main creatively chose to make the candles in recycled soup cans and identified an opportunity to give back and donate the soups to local homeless shelters. To date, Hart has given over 50,000 meals to the needy through Man Cans.

Enzo Monfre is a 12 year old founder of Enzoology Education and Exploration Nation. At 7 years old, Monfre wanted to have his own science show. What started as just a few uploads to YouTube has since developed in an award winning, instruction program to help ignite and sustain the love of science in elementary and middle school students. Enzo has been featured on Ellen Degeneres, NBC News, Forbes, Tome, Scientific American and many other news outlets.

Mikaila Ulmer is the 8 year old owner of BeeSweet Lemonade and 2012 Teenprenereur of the Year Award Recipient. Ulmer started her lemonade company at age 4 when her fascination with bees and honey got a boost from her great-grandmother’s 1946 Flax seed Lemonade recipe. BeeSweet Lemonade is a premium old-fashion lemonade sweetened with local Texas honey and 100% pure cane sugar.

Victoria Walker is the 11 year old winner of a Silicon Beach hackathon beating out nearly 120 professional computer developers at a competitive event and ultimately winning $20,000 to further develop a mobile app and market it. The AT&T sponsored hackathon was in conjunction with their IT Can Wait campaign which challenged developers focus on creating an app that would help reduce distracted driving. Walker’s app “Rode Dog” enables users within pre-established social networks to send barking sounds to offending pack members to encourage them to stop. Walker has been featured on many news outlets including Huffington Post, LA Times, Venture Beat, KTLA5, and Fox News.

If you’re at SXSW make sure to come by and see the exceptional group of young innovators.