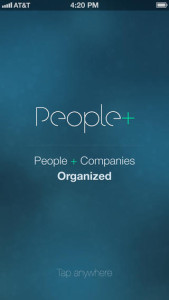 Silicon Valley, in a proverbial hornet’s nest of legal intrigue has been buzzing with one of the biggest (and possibly unsettling) displays of take backs the tech world’s seen this year. For those just tuning into the events, we’ll provide you the long short of it in play by play fashion:

I’ve used the word unsettling three times in this article already and we’re barely a couple minutes in. And by overwhelming support and feedback that People + is receiving on their Twitter and across the tech news world, it doesn’t take much to see why we, as a tech community find this to be such a problem.

CrunchBase, a self stated free service, (with a publicly filed creative commons license which iterates the “free” usage of their data) is open source, but only on a conditional basis.

Let’s let that sink in a little bit. It’s kind of difficult to grasp, but somehow it really is… unsettling (there’s that word again). I can’t help it, but it kind of harkens back to the concrete savannah of one’s youthful childhood days when the taller kid need only say the words “because I feel like it”, when they take back the ball they had lent to you but a moment ago.

And that’s what’s going on here. AOL x TechCrunch, under their own reasonings and definitions on what it means to be a “direct competitor” has decided to make a move and rescind the open source nature of a product they offered years ago…

Especially unsettling (last time I swear) because People+ is offering mobile & Google Glass options, while CrunchBase is strictly a web-app. But really, the question we need to ask ourselves is, where does this end? If it’s simply a matter of feeling threatened to serve a cease and desist, at what point is the creative commons license just a useless badge? And at what point does protectionism go too far, to the point that innovation is stifled?

As one astute commenter on one of the many up-roaring blogs stated (paraphrased): “AOL’s just mad that People+ beat them to the punch”. Maybe there’s something more that we don’t know. Perhaps this is AOL’s move to protect a mobile app launch they’ve had in the works. But speculation is merely that. Speculation.

To keep up to date with People+’s work, be sure to visit and follow their Twitter and Homepage.

In closing, I leave you with this hilarious link, as tweeted by People+.

Engage: What are your thoughts on this and where should the line be drawn? Do you think AOL could be coming out with their own product or might they just be looking for settlement and royalties off a potentially lucrative app?