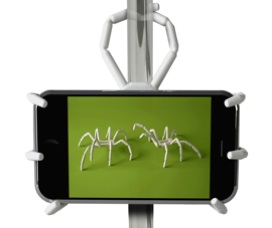 I have outgrown G.I Joes, (so says my girlfriend) but at least I can make a good case that I only use the Spiderpodium as a stand! (wink)

I have the opportunity to review a ton of different accessories for both TechZulu and i-FFICIENCY. To this day however, I have not had as much fun doing a review as I did with the Breffo Spiderpodium.

The majority of cases and stands on the market have one maybe two functions; protect and display.  The Spiderpodium has almost limitless use cases.  Right after unboxing you realize this is unlike any other stand on the market.  It is a center ring and 8 articulating arms (maybe why it is called a Spiderpodium).  The 8 legs wrap and your gadget tightly allowing the rest of the arms to be used for, well anything.  I tried it in the vents in my car, on my desk as a stand, hanging from a shelf and to ward away unsuspecting people near my desk.

I love the fact that you can flatten the Spiderpodium and throw it on your bag.  The majority of stands I have are in a fixed shape so taking it on the road is a hassle.  I currently use a case without a stand functionality (have not found one I like) so the Spiderpodium is an easy, non intrusive addition to my bag.

I would be remiss if I did not include how much fun I have had goofing around with these things.  We have multiple units.  Both white and black Spiderpodiums ($19.99) and the new Tablet Spiderpodium ($34.99) in grey.  Let’s just say there have been some epic battles on my desk. 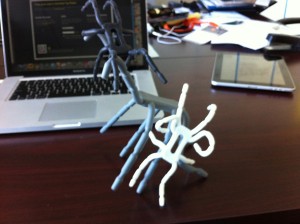 As you can see from the Breffo Gallery, we were not the first to think of this.  My favorite picture is the Transformer getting attacked or the Spiderpodium wristband.