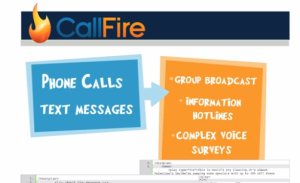 CallFire creates simple text and voice platforms for businesses to use to reach their customers.    CallFire’s growth has been tremendous: surpassing the 200,000 user mark, reaching the 200 million campaign mark for executing calls and texts campaigns, and a 100% growth in the past 12 months.  Born on the shores of Santa Monica, California, the company is taking its beta-tested Cv3 platform out into the public today.

According to CallFire’s CEO, Dinesh Ravishanker, “Companies are increasingly looking at voice and text as the obvious way to automate business processes and communicate everything from marketing messages to logistics with customers and other audiences, and this adoption shows no signs of slowing down.  A key priority for any customer is getting up and running quickly and cost effectively, and our new customizable platform makes this easier than ever.”  With the numbers that back his statement, it’s no wonder CallFire continues to become a larger force in phoning and text messaging campaigns.

Some of the new CallFire Cv3 platform features a new and improved UI, helps enable CallFire customers to view from mobile devices and multiple desktops.  They also improved their error recovery system and added content specific filters for the text and voice campaigns.  New developer tools now support full SOAP and REST API to build new applications.  Another API has been added to support IVR (interactive voice recognition) and PHP Toolkit enables developers to get CallFire’s system running much more efficiently.  CallFire has added a new subscription billing plan, to offer greater value and simplify pricing, alongside with their ”Pay as You Go” plan.  CallFire has also incorporated an additional number of upgrades to their platform including, a comprehensive Site Tutorial, Cassandra Big Data implementation (to maintain a higher quality calls with zero performance degradation), and improved contact management.

The number of changes and additions to the new Cv3 platform will get CallFire to grow even larger than ever.  Businesses such as Allstate, Domino’s Pizza, and Pepsi have joined the increasingly large club and shows how far CallFire has grown.  Dinesh Ravishanker and the rest of his crew are looking forward to another amazing 12 months and with the recent release of the new Cv3 platform, it just may have gave them a head start.

Businesses looking forward to expanding their customer base can visit CallFire’s homepage to learn more about their services.