Coincident.TV Is “CREATE”-ing Second Screen Transmedia Producers Out of Everyone [Beta Invites] 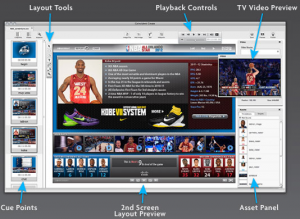 Hours after the panelists debated the future of content distribution at the Silicon Beach @ USC conference, across campus at the Annenberg Innovation Lab a remarkable product demo was taking place by Coincident.TV .  A technology that will surely revolutionize how viewers interact with content and television in the very near future. Coincident has created a platform that will allow storytellers and producers to create robust second screen stories on the fly that incorporate video, images and other web content. The implications of what types of new interactive experiences can be made utilizing this technology are phenomenal.

This San Francisco startup has amassed an impressive portfolio of innovative products that have the potential to disrupt content distribution in Hollywood and everywhere else. Their product offerings can benefit business from different perspectives from the producer, to the advertiser, to the end user — they have covered it all flawlessly. Imagine watching your favorite television show along with your iPad and having time-synced engagement that draws you deeper into the plotline through touch-activated hotspots, storyline added bonus features, retail opportunities, games, promotions and outbound links to other relevant content. Cool, right?

To put this technology into perspective, let us take a step back for a moment and explain what the future of television and content is shaping up to look like. Content/television programming/video is moving away from being a sit-on-the-couch-watching-your-TV experience. What is coming is Internet-enabled televisions, content streaming with built-in social media interactions in real time and multiple screen activities. People are not simply watching the TV anymore. They are watching content on the TV or on their laptop while playing with their smartphone or tablet at the same time.  Each of these platforms represents a variety of “screens” to view from. These new viewing habits and 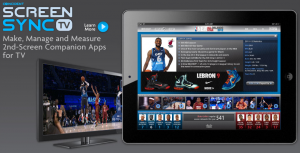 technology advances are giving technologists and content producers an entirely new frontier to develop when it comes to creating transmedia and second screen (tablet or smartphone) experiences for viewers. It has been reported by Google that 77% of viewers use a companion device while watching TV. Locally, Google is getting into the content game itself creating hundreds of celebrity driven channels and setting up shop all over Venice to produce content in preparation for this new world. There is a television/video/content/Internet revolution coming.

With second screen devices, the original storyline can continue and evolve in completely new directions. Users who seek out these second screen apps and opportunities will be rewarded with bonus content, alternate storylines, deeper character analysis, more information, retail opportunities, games, promotions, prizes and whatever else the producers come up with simply by opening the app and swiping, touching or moving along with the show as it airs. All of this is made possible by Coincident’s ScreenSync TV technology. ScreenSync TV can present companion content and interactivity synchronized to “big screen” video. When the show is not on, there is still plenty of content a viewer can interact with through that app. WOW, right?

With the rapid trajectory of tablet devices purchased in the past few years, media and mobile companies are scrambling to create new apps for them. Many companies are developing second screen technology, but few have come close to what Coincident.TV has accomplished. Cable TV pioneer Cisco agrees and has partnered with them.

The ideation behind Coincident.TV came to engineer and serial entrepreneur David Kaiser (Founder and CEO) in 2008 while surfing on his laptop while watching TV. Kaiser noticed the awkward disconnected experience between the devices and the user, which led to the Coincident.TV solution that gives users the ability to truly engage with interactive branded content seamlessly.

Kaiser joined forces with Bruce Schwartz (Founder and CTO) to write an entirely new code language they called Interactive Television Markup Language (ITVML). This invention is significant because currently most second screen experiences are one-off projects hand-coded in XML mark-up languages  — which is very expensive and takes a long time to produce. Coincident.TV invented ITVML in order to create an easy to use WYSIWYG-style cloud-based authoring tool that allows a producer to just drag and drop video, images, soft cue points, actions, hyperlinks and any number of options to create highly interactive and extraordinarily connected video experiences at a fraction of the price and time. This new technology also gives the producers complete control over the experiences they are creating.

ScreenSync TV is just one product offering in the amazing portfolio of products Coincident has created. Other products include a Player that seamlessly integrates video, web, social media and e-commerce with build-in analytics – via a full featured standalone player; and Measure 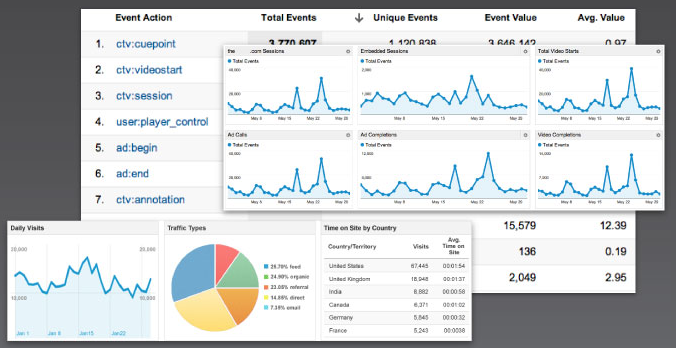 which allows the tracking of every aspect of the user experience down to each click for deep analysis and custom reporting.

Coincident has a bigger vision than developing this technology just for the big media companies and ad agencies. In the spirit of the Internet, they want to give everyone the power to become a transmedia second screen producer. Later this year, Coincident will introduce the Coincident “CREATE” editing platform in both a FREE and PRO version.

And…because you are one of our loyal readers, you are about to find out how you can get your hands on this technology for FREE right now! Coincident.TV is giving our readers early access to download and play with the FREE version of this amazing software. To download the CREATE authoring platform and have the opportunity to join Coincident.TV’s developer list click here and look for the CREATE download section.

If all of these leaps in technology aren’t ridiculous enough, ridiculous as in super AWESOME —it just keeps getting better and better. Concident.TV continues to push their smart technology into new areas and are currently working on developing a new live interactive second screen product called “INJECTOR.” Imagine watching football with this live second screen app. Very cool!

For fun they created another product for music discovery called Vinja.TV.  Vinja.TV is an app that enables fans to create playlists and discover similar music recommendations by entering a name of a band and out will pop recommendations of similar bands. Files are generated on the fly and are linked into the “All Music” database.

This company is poised to help content creators push new boundaries and to transform the social television/video/content experience. They were nominated for an Emmy for the Glee SuperFan experience, have worked with advertisers like Audi, and networks like Fox, CBS, MTV and Fox Sports.

Currently, Coincident.TV is shopping around for Series A funding and they are making the rounds at conferences and panels on the future of television discussing their remarkable new technology. If you get a chance to see their demo, take it.

It seems almost guaranteed that once this new innovative companion technology platform is adopted, watching TV on a couch with one big screen will be the old-fashioned way, because an entirely new future in content engagement is being developed by Coincident.TV right now and it will rock your world. So get ready, it’s coming!