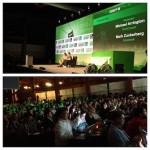 Every conference is different. The format, the layout, the presentation, the venue, the motives of people attending and presenting.  The one common thread is interaction with people. Even if you’re the shiest of shy, you’re bound to interact with at least one person while you’re there.

This was my second TCDisrupt conference, however my first attending as press. The visible press pass label is a people magnet – most people you pass want to talk, discuss, pitch. I received dozens of long emails each day with press releases, pitches, news and information. Most emails were nothing short of a report. I was actually shocked at the lack of brevity and the inefficient communication style.  I can’t even begin to imagine what investors feel like when they’re being pitched by so many people, week after week, or some CEO’s that receive 2000+ emails each day.

1. Keep it Simple (unless they directly ask for it)

There is no need to tell every.single.detail to the press or the person you’re pitching or talking to. No one wants to wade through mounds of information. We will ask if we need more. Being overloaded with details on an initial point of contact is usually a turn off. An elevator pitch would suffice.

2. Put yourself in their shoes

Imagine you’re sitting at a clean desk and 10 people came into the room unannounced, with documents, books and piles of information to read, throwing it on your clean desktop, while running out of the room saying, “Thanks! Read that and get back to me ASAP”.  Not only that, but they come back 5 minutes later, and again 5 minutes after that to ask you if you’ve finished reading everything. Obnoxious, right?  Sending emails with lots of information and no warm lead feels exactly as if I were at the desk I just described.

There is a fine line between being persistent and being pushy.  One company sent multiple emails, one of which that had a twinge of bitterness for not hearing back. This same company sought us out as we were leaving, after being told we didn’t have time to talk, followed us out as he pushed the iPad in our faces. No bueno.

4. Lead into a Conversation

Try to find a connection to the company or person.  “We know [insert name] in common, he speaks very highly of your company” or if you don’t know someone in common, or cannot be intro’d by a mutual contact, then try offering a perk to the press contact. Some companies did a good job at this, in particular offering backstage passes or free drinks.

People always ask how I know so many people. My response is always that it’s not that I know more people than the next person; it’s that I stay in touch with almost everyone I meet.  Once you make contact with someone, maintain it. Send a very brief follow up email. Add them on Facebook. Follow them on Twitter. Say thank you with a reminder of how you met.

That being said, I met some great people and companies at TCDisrupt. It was difficult to choose, but I narrowed it down to a list of 4 great examples:

Hugh was one of the first people I met at TCDisrupt, through a good friend of mine as we were looking for our press seats. We all know him as @gapingvoid, and his inspiring artwork that is well-respected and loved by many entrepreneurs.  Hugh provided what is called “Live-Tooning” for the conference, something that he considers his version of “Public Speaking”. Hugh himself would sketch during each speaker’s presentation to capture the energy and inspiration of each of them. See the video reel, here, for examples and highlights from the event.

Gapingvoid provided a variety of content (in addition to the live-tooning) for the event, from the official event’s t-shirts, to the animations that launched each day’s events.  From what I hear, Gaping void is doing more and more events these days.

Gyft’s team sent a very brief email asking politely to set up a time to demo their product. It was clean and simple, and quickly opened dialogue between us.  While setting up a time, they invited me to their private party. Quickly caught my attention by keeping it brief and didn’t waste any time.  When we realized we couldn’t meet in person, they offered to set up a quick call with the co-founder, CJ MacDonald.  I requested more info, and before I knew it I had exactly what I was asking for, with a link to a dropbox file. Plain and simple.  I was able to watch their presentation before the call, which helped shed some light on the great personality of their company and its individuals.

The Google Venture, Founder Collective and 500 Startups backed company is based in Palo Alto, CA. Gyft has tapped into the $100 billion dollar gift card market by enabling shoppers to manage all of their gift cards from one mobile device. You will never lose a gift card again, thanks to Gyft.  Users simply download the app, enter their gift card’s information, and all info is stored in the virtual wallet for future redemption, in-store or online.

Perks: Users can send gift cards to friends and family at the click of a button, through Facebook, email or even text.  Users can also get FREE gift cards simply by downloading the app from the iTunes store.

Here is a fun video to summarize:

This example is a lot of fun. Lit Motors is a San Francisco, CA based company that designs and develops environmentally-conscious transportation solutions.  They basically turned the motorcycle into this bad-ass, gyroscopically-stabilized, energy-efficient and environmentally-friendly car (watch their cool video, here).  It doesn’t tip over (they tried in the demo to prove it).  In the midst of watching their presentation, all I could think of was the sweet motorcycle that Batman lets Catwoman ride in The Dark Knight Rises. You couldn’t tip that thing over if you tried. The back wheel would spin underneath her as she stayed sitting perfectly in the seat. I immediately tweeted to Lit Motors:

Five minutes later, I had purchased a Catwoman costume on Amazon.com, notified Lit Motors on Twitter, and so it began.  There is now a series of emails between myself and Lit’s CMO, Ryan James (who was running the Twitter account), discussing and planning a marketing scheme for the end of October.  We will see what the future holds.  Should be interesting to say the least.

I had the pleasure of hanging out in the DJ booth at the TCDisrupt Yahoo! after party event, with the CEO of DJZ, Seth Goldstein and Director of Marketing and PR, Liz Heinlein.  If you love DJ’s and want to immerse yourself in their world, these are your guys. DJZ is bringing it all together and creating a platform to house everything related to the DJ world, from new releases to shows and festivals to top news and apps, they give you everything you could ever want or find. Users will be able to learn about their favorite DJ, discover new artists, find every bit of info in one place instead of scouring the web. Get your headphones ready, they launch Halloween 2012.

That a wrap, folks. When you meet people, bottom line, be yourself, be real. No need for bells and whistles (although they can be fun).  Just have fun, put yourself out there, and make friends. Connecting and communicating with people is that simple.