E3 2014 Press Conference Overview & Our Grade For Each

E3 officially started yesterday.  Thankfully gamers and the media were able to experience what would be coming in the next couple days at E3 and beyond from Microsoft, Ubisoft, EA Games, and Sony’s press conferences.  Here’s a quick look and grades of each of the press conferences. 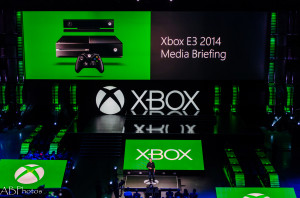 Microsoft kicked off E3 with a change of pace from its past media conferences.  They must have been listening to the gamers’ out there, because it was all about the games.  No mention about the Xbox One’s new price points or even Xbox Live.

Starting off the show’s barrage of games, Call of Duty: Advanced Warfare, showed all of its glory.  Then the list of games started to accelerate with Forza Horizon, Evolve, Sunset Overdrive, Rise of the Tomb Raider, Inside, Crackdown, Dead Rising 3 Arcade Remix Hyper Edition EX+ Alpha (best title ever), and Master Chief Collection.  There were many more shown on Monday and showed Microsoft knew what they were doing and their goal was clear: more games for Xbox One owners.

They also heard the criticisms about their stance on indie developers and had a small section dedicated to the smaller studios out there.  Trying to reel in some of the lost indie development support they lost over the years and how Sony has been “opening” its arms to the smaller companies got Microsoft to rethink its strategy.

The show gave away many breathtaking trailers and games and gave assurance to gamers Microsoft knew what they were doing with the Xbox One. 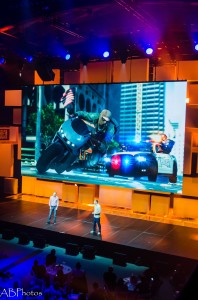 Over the years, EA went big with their E3 conference.  However, this year the show took a simpler and more direct approach to presenting their games.  Starting off the show with the development of Star Wars: Battlefront 3 and an in-depth look into Dragon Age: Inquisition, got the crowd riled up.  Then Faith’s introduction got the crowd even crazier with a healthy dose of Mirror’s Edge 2.  BioWare’s early showing of concepts from their new Mass Effect game and a new mystery game definitely garnered a lot of gamers’ attention.  From there, the games from EA were all too predictable and soon the show doused its red hot intro of games and provided an all-too-familiar lineup of games from their sports lineup and Battlefield franchise.

UFC provided a great video of Bruce Lee and its fluid combat system.  Criterion Games, studio behind hits such as Burnout and Need for Speed: Hot Pursuit, are working on an extreme action sports game, but nothing was truly revealed so far.  EA had a slew of promises on their other sports games such as Madden NFL, NHL 15, PGA Tour, and FIFA 15.  Those promises don’t look too promising and shows nothing new or refreshing.

The stage was set green to introduce Sims 4 and gave a few interesting tidbits on the game.  EA showed a surprising MOBA game, Dawngate, and set a different tone from their usual stance on game development.  The last game was their showing of Battlefield: Hardline and showed off a lot of multiplayer components.

Mirror’s Edge, Dragon Age: Inquisition, Mass Effect 4, and BioWare’s mystery game provided EA with some hype for its games.  But even with those amazing titles in store, the publishing giant didn’t set a new standard of some sort throughout their presentation. 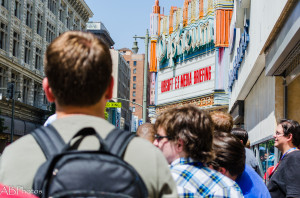 Aisha Taylor presented Ubisoft’s games with some foul-words that made the presentation much more enjoyable to watch.

FarCry 4 introduced the new crazy world gamers were going to step into and showed off amazing scenery and graphical crispness.  Just Dance and Just Dance Now had a great showing of what future of the series – and possibly other future games – can do using the mobile phone.  Tom Clancy’s: The Division was up next and had one of the most depressing trailers I have seen.  The trailer didn’t show nothing really new, but the game still looks great and definitely giving gamer’s something to be itching for.  The Crew gave us all a glimpse on how large the game is.  It takes two or more hours to drive from across the map!  Assassin’s Creed: Unity also provided a more in-depth look into the story, where Microsoft showed off a 4-player co-op gameplay.  Shape Up is a new fitness game and looks absolutely fun to play.  With various challenges and fun visuals, the game looks to make working out a fun way to get yourself in shape.  The final surprise was the rise of Rainbow Six.  The trailer looked awesome and once again, the franchise looks to be something worthwhile to look forward to.

Aisha Taylor is a well-known star, but Ubisoft took all her star power away with their vast majority of great games and surprises.  Ubisoft is looking to make sure gamer’s aren’t going to be bored anytime soon.  As Aisha Taylor said, “Here at Ubisoft, we start big.  And then we go bigger.”  And that’s exactly what Ubisoft did.

Out of all the conferences, I was unable to attend Sony’s (which was a disheartening thing), but doesn’t matter as gamers worldwide were able to see the viewing of what Sony had to offer.  Sony had a huge lineup of games to show throughout the conference.  Ranging from Destiny, No Man’s Sky, Batman: Arkham Knight, Little Big Planet 3, Mortal Kombat X, Metal Gear Solid 5, Uncharted 4: A Thief’s End, and much, much more.

Sony also brought out some news with their Playstation Now, Playstation Plus, and Project Morpheus news to the table.  What they look forward to in the future is outdoing what Microsoft is doing with the Xbox One: the all-in-one entertainment system.  A surprising move by Sony, because in the past Microsoft would do all the hardware and online talk, while Sony were all about the games.  This year, they did the opposite. Sony did show a ludicrous amount of games, but the show lasted almost 2 hours!  Almost half could have been thrown out the window and saved to be shown at the Sony booth.  But, I thought it was important for Sony to do this.

Sony in the past was great for gamers everywhere.  They thought about indie developers and tried to have the most exciting games on the Playstation.  Sony believes they achieved that and the only way to improve upon the brand is the hardware and the online services they provide.  Sony is looking towards the future of the brand.

Nintendo’s pulled out of E3’s press conferences a few years ago.  Their online showings were average at best.  This year, they pulled out every single artillery they have.  The new announcements for Legend of Zelda, Splatoon, Yoshi’s Wooly World, Xenoblade Chronicles X, Super Smash Bros., Kirby and the Rainbow Curse, Mario Maker, Hyrule Warriors, and Bayonetta 2 was the most Nintendo showed since their Gamecube days.

The presentation was well done and somewhat hilarious – thanks in part to Robot Chicken – and the ridiculous snippet of Reggie and Iwata fighting.  The games – thankfully – were still the real stars.

Nintendo had the shortest offering when it came to time, but the way they used it was more than enough.  They took every minute to describe new games, without revealing too much.  The awkward transitions and speakers were all thrown out and had a more intimate approach than the other four conferences.  Nintendo this year pulled out every wild card they had and provided gamers a real sense that Nintendo is back.

E3 this year just got started.  Wait for some more news about the games we played on the show floor throughout the week!