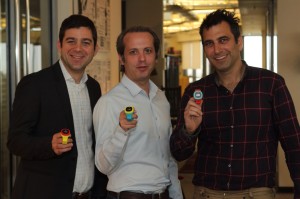 One of the biggest fears of a parent is to lose their child.  Interestingly, not many technology advancements have been made to conveniently track children.  Devices are either too expensive or just plain ridiculous (I’m looking at you, leash backpack).  After analyzing the market, the founders of hereO conceptualized a GPS-enabled watch for children that’s both stylish and tracks their position, giving parents that much-needed peace of mind.

hereO decided to crowdfund the creation of their watch on IndieGoGo and successfully reacheded their goal.  The hereO is a small watch that allows for GPS tracking or in the words of Co-Founder Allon Gladstone, “A device we believe to be the world’s smallest connected tracking device, specifically made for children.  It’s part of a greater solution that we’ve created, the hereO family app.”

The hereO app is another product the team has created in conjunction with the watch to help track family members.  The combination of the app and watch allows parents to create safe zones for kids – which notify family members when the children enter or leave the zone.  The app can also warn and notify other members when the watch has been taken off or when the child is lost.  A history of locations is also stored and directions are given to locate your child.  Right now, the app is in beta stages for iOS and will be released this month. An Android and HTML 5 version will follow in June.

Allon says the idea started with another Co-Founder, Daniel Ivesha. “He was at the Nottingham Festival in England and lost his niece for about 10 minutes. She was only three at the time and with over two million people at the event, the chances of finding her were looking slim.  She ended up at one of the gaming booths and didn’t even know that her family was looking for her.  After that happened, they noticed a lot of kids on leashes and around the time Google Latitude came out, my partner’s brother was locating his girlfriend through Latitude and that’s when it hit him.  ‘Why don’t we use this technology to create something not as intrusive as a leash?’” 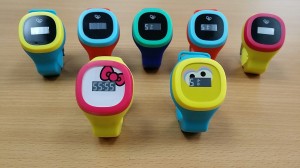 Allon showed me a variety of hereO watches in different colors and compared them to the competition.  hereO is small and light.  The watch is obviously too small for adults, but perfect for kids ages three and above.  It’s unbelievably light, 50 grams to be exact.  The bright colors and cute looks will definitely catch the eyes of children. Instead of being forced to wear something, kids will likely choose to wear the hereO watch on their own.

The battery lifespan is up to 72 hours and it comes with a charger.  It isn’t a smartwatch where kids can make phone calls or play games.  Rather, hereO is designed to be simple and cheap to give most parents a chance to have the convenience of tracking their children.  The price point starts at $149 and comes with a six-month subscription at $4.95/month, a small price to pay for the safety of your child. 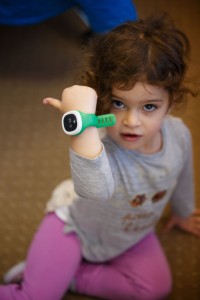 hereO is also working on another campaign which donates a percentage of their funded efforts to an organization called Autism Speaks.  “A large percentage of the parents using hereO have kids with special needs.  To help them, we are creating a version of the watch with a locking mechanism – a requirements for kids with Autism who might want to remove it.  A percentage of the proceeds will go to the organization, Autism Speaks,” Allon tell us. Buying the locking mechanism perk will inevitably delay the shipping of the hereO by a month, but will be worth the wait for those wanting to prevent tampering and safety.

Our Take: hereO has a fully-functional product backed by the credibility of a successful crowdfunding campaign. hereO watches are expected to ship some time in July.  Soon it’s going to be a lot harder for kids to play “hide-and-seek” with their parents!