How to Choose a Smart Home Hub (+ Infographic) 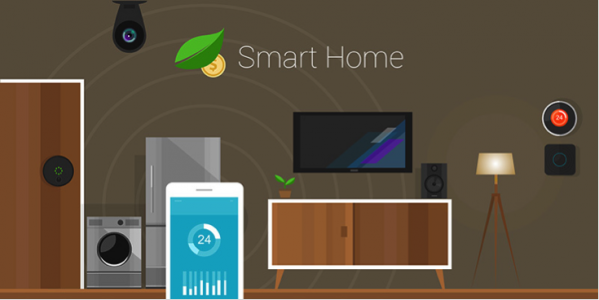 You’ve tinkered with a NEST, installed a couple of Philips Hue light bulbs, and now you’re hooked on home automation. What’s the next step? To truly make your home “smart,” you need a home automation hub (also known as a smart home hub).

Here, we’ll detail the different options on the market and help you decide which hub will work best for your home.

What is a Smart Home Hub?

A hub is a tool for turning an automated home into a smart home. Sure, you can turn your lights on with an app, but that’s really just a fancy remote control. If you want your home to be truly smart—to know when you walk in the door and turn your GE Link lights on, play your favorite playlist through your wireless speakers and set the temperature to “perfect” via your NEST wifi thermostat—then you need a smart hub to unify all these connected gadgets. A hub acts as the brain of the smart home, communicating with individual devices and telling them what you want to do.

Additionally, a hub provides unifying software (usually an app for a smartphone) through which you can control all those devices. The app lets you set different scenarios for different things to happen, based on different prompts. For example, you can have all the lights turn off, your smart thermostat turn down and your doors lock automatically when you leave by setting up a “Goodbye” robot/scenario/scene (different hubs have different terminology).

What is the Future of the Hub?

It’s worth noting at this point that the concept of the smart home hub is rapidly evolving. In many ways, it is something of a smart home Band-Aid, holding things together until the disparate companies involved in the smart home space can figure out how to make everything work together.

The problem is that there are a variety of different protocols that power smart home devices. A smart home hub solves this by incorporating different radios for each protocol, allowing it to communicate back and forth with each device and act as a translator between them. These protocols include the ”traditional” home automation protocols of Zigbee, Z-Wave and X-10, which all work within the home and don’t require internet connectivity (the cloud) to perform their duties. These protocols also have the advantage of using “mesh networking” for long-range communication around your home, helping extend the signal through each device, so no matter how far from the hub of the home a device is, it can still be controlled.

Then there are the newer protocols, including WiFi, which is the most popular for stand-alone devices but does require an internet connection, and Bluetooth LE (Low Energy), which is becoming popular for low-power, high-draw devices such as speaker-enabled light bulbs and smart locks and doesn’t need to be online. Other protocols you may come across are proprietary ones, such as Lutron Clear Connect and Insteon, which only work with their manufacturers’ systems.

In an ideal world, all devices would work over the same protocol, but in this fast-growing space, that is increasingly something of a pipe dream. Additionally, the large differences between the demands of devices found in a home make this unlikely; what is good for powering communication to a low-energy-use doorbell is not necessarily going to work for a high-energy-use tumble dryer. Technology companies such as Apple and Google are attempting to create some sort of unifying operating system for the smart home, producing HomeKit and Brillo/Weave, respectively, but the competitive nature of these companies means the dream of universal operability is likely just that—a dream.

Additionally, as the hub’s main function is to provide you with software to control your home, it’s likely that in the future, the hardware part of the hub (the radios) could be subsumed into another device already in the home, such as a wireless router, set-top boxes like Apple TV, or, as is already the case with NEST, a thermostat (see infographic).

How to Choose Your Hub

Right now, if you want a smart home, you need a smart hub. Here are the main considerations to bear in mind when shopping for one hub to control them all:

Pile on the Protocols

If you are planning on incorporating a lot of different devices into your set up and don’t want to commit to one manufacturer, look for a hub that has multiple radio sets and supports lots of protocols.

A hub with an open API to its software means device manufacturers can write software to make their devices work with the hub, as opposed to users having to wait for the hub manufacturer to get around to adding compatibility.

Compatibility with third-party software services such as HomeKit or IFTTT, a cloud-based hub that helps devices communicate with each other, can extend the functionality of your devices, unlocking new interoperability between devices and allowing you to use features like voice control, even if it’s not supported by your hub.

Most hub manufacturers make their own products, but also support devices from other manufacturers. If you already own some smart devices, or have your eye on a particular product, make sure the hub you choose is compatible.

The software that you use to run your hub will be something you open multiple days each day, likely via an app on your smartphone, make sure it is something you like the look and feel of and that offers the features you want. Look for a robust scheduling system that lets you set up schedules for your devices and create actions to connect different devices, such as an action that turns your lights off when you leave the house. Also key is the ability for the hub to communicate with you, send you alerts when chosen actions are completed (such as an alert when your daughter opens your front door with her unique code), or when something goes wrong in the house, like the washing machine flooding.

The device itself should be a factor in your choice. Do you like the look of it? Does it have to be plugged into your router? Does it have a battery backup so that it can still keep control of your home even if the power goes down? Are there spare USB ports to allow for future expandability?

In this infographic, we run down some of the most popular home automation hubs: WINK, Smart Things, VeraLight and Insteon, and list which of the above features each has. We also include a couple of devices not traditionally thought of as a home automation hub, but that, thanks to expanded capabilities and open APIs, are now capable of operating more than what they were originally designed for. These are the Lutron Caseta Wireless Hub and the NEST Learning Thermostat. For a list of products that work with each hub, click on the “Compatible Products” link in each entry.

Jennifer Tuohy is a tech buff and frequent writer for The Home Depot, often writing about the blend of technology in the home, including topics of home automation. You can see more info on Wink and other smart home products on homedepot.com.