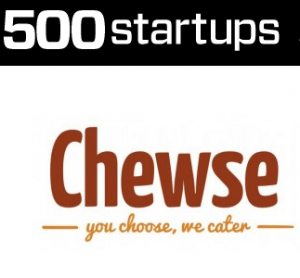 LA-based company, Chewse has joined 500 Startups in Silicon Valley, making it the first starup from LA to join the prestigious accelerator program and seed fund.

According  to 500 Startups, it provides early-stage companies with up to $250K in funding and a startup accelerator program, including unique events and an experienced network of startup mentors around the world. It also has a creative work space at Silicon Valley, meaning that joining the program gives founders a step ahead by exposing them to a vibrant community of other startup founders, who they can learn from to aid them succeed.

Chewse now joins the 500 current class commencing today, November 31 with an aim to even  be a better marketplace for groups to easily order great food.

500 Startups fifth accelerator batch is a selection of international startups with 15 percent of the total originating outside the U.S. 33 companies are in this batch. The program kicked off on October 4, 2012.

According to 500 Startups, “This is the first time we utilized an open application process. We used AngelList’s platform to fill a few of the remaining spots in this batch – 3 weeks before the program started. The process worked really well for us, and we plan to keep working w/ AngelList for future batches.”

500 Startups says it received hundreds of applications but ended up selecting 8 companies. 500 startup adds that 7 of these companies have at least 1 woman founder while more than half are from outside Silicon Valley and 19 companies or a total 57 percent international and from outside the U.S.

Joining the 500 Startups is no small feat, according to Chewse CEO  Tracy Lawrence, “it’s a prestigious accelerator program and seed fund and we are so proud to join the class, and to make LA  proud too.”

Back to Chewse, the startup wants to remove the hassle of finding an easy, delicious meal for just anyone or company or event. With an easy way to order online.
Chewse’s menu comprises of sandwiches, sushi and thousands more from a variety of restaurants and menus listed on their site. Users can either pick up food on their own or request for it to be delivered.

The startup says it has an expert team of catering partners who deliver meals for less than 10 people in a private event to a massive 1,000 guests and over without sweat.

Chewse has also hand-picked over 50 quality catering partners to serve Downtown LA and West LA and all at affordable prices to fit just any budget from college goers to high end professionals.

The 32 other startups in the class are listed here.