The Future of Personal Manufacturing | The Thing-O-Matic 3D Printer 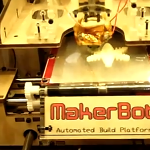 3D printers have been around for a while, however, just until recently are the general consumer beginning to hear about them and actually have the chance to buy them.  How does it work?  Just as you think it might.  An object is designed – Bunny, Lego Man, snowflake – using your computer, then that design gets sent to the 3D printer.  Rather then just drawing a picture of the object on a piece of paper, it literally builds the object using melted plastic.  Building the object layer by layer until its completion.

The MakerBot Thing-O-Matic 3D is named so because it is an automatic 3D printer. Most other 3D printers can only do one thing at a time while the MakerBot Thing-O-Matic 3D printer prints object after object.  It allows you to have a print queue where your machine will clear the build surface between builds by printing, then ejecting. It prints objects one after another, giving you your own little factory on your desktop.

Although the Thing-O-Matic is dead simple to connect to your machine via USB, you still need the software to design and build your objects.  You need to 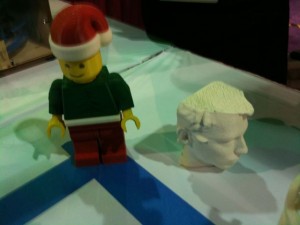 save objects in the STL (stereolithography) format. There are free design packages like Blender and Google SketchUp for those not looking to spend more cash then then you have already spent on the Thing-O-Matic.  I see designers picking this up rather easily and getting their objects printed in no time, however those with no experience will definitely run into some snags here.

The MakerBot Thing-O-Matic 3D printer kit is available for $1225.

What’s in the Box