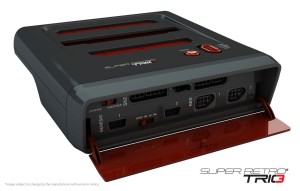 In the mid 80s and early 90s, the tech world was all about video games.  Nintendo started a revival of the video game industry and every child and adult were equally having a great time playing games at the arcades and at home.  The Original NES, SNES, and Sega Genesis provided homes with endless fun and entertainment, but those consoles are long gone and only a handful of people still hold on to such old relics.  Innex, Inc. is planning to bring the old-school consoles back into gamer’s hands by selling the Super Retro Console and Adapter by Retro-bit.

Retro-bit is manufacturing two items for the nostalgic gamers; the Super Retro Console and the Super Retro Adapter.  The Super Retro Console allows you to play original Nintendo, Super Nintendo, and Sega Genesis games.  The console comes with three different cartridge slots, six controller ports (supports both first party and third party controllers), an AC adapter, an S-Video connection, and an AV cable.  The suggestive retail price is $69.99 for your gaming pleasure.  The console looks sleek and compact, and the ability to play three different types of games gives gamers less clutter to have around the house. 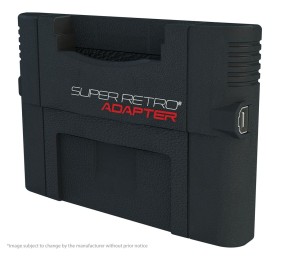 The Super Retro Adapter lets you play Gameboy Advance games on the Super Retro Console. Another great thing about the Super Adapter is the Super Retro Console is not needed to use the Retro Adapter.  The Adapter can play on the original Super Nintendo or any other third party 16-bit console.  It even has ports (cables sold separately) to connect up to three more Gameboy Advance systems to play four-man gaming.  The Adapter SRP is $39.99.  Buying both the Console and Adapter as a bundle, the SRP is $89.99.  With the affordable price points, Retro-bit is ready to give gamers a reason to look into the past.

Innex, Inc. is not only selling the Retro-bit gaming console, but they have been offering many other products such as video game accessories to “geek” inspired toys to the public.  With a ton of toys and gadgets for the public to buy, they have been offering unique products that can be hard to get elsewhere. Innex, Inc. may only be selling to a niche group of consumers, and won’t serve those looking for GTA 5 cheats, but they have found a group that will always be enjoying the products they offer.

Innex, Inc. is going to be showing the Retro-bit gaming consoles at the E3 Expo this year, with a plethora of other toys and gadgets they have in their inventory.  Retro-bit is bringing a blast from the past for casual and hardcore gamers alike.  With a sleek design and an affordable price point, there isn’t anything for gamers to not like from the package.  Instead of finding, fixing, or paying high prices for working old-school consoles, the Retro-bit gaming console has you covered.

Visit Innex, Inc. to get your geek on!