Scoville: Why Should You Care? 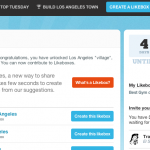 Checking into a place with your phone and telling your friend about it isn’t exactly new, Yelp, Foursquare, and Facebook have that covered. Scoville does it, but not alone; it’s a web application that works in connection with Foursquare. Sign up, find your friends, invite them to join, customize lists of your favorite places and promote your #TopTuesday. Once you get started, it analyzes your old check-ins and organizes them into categories like restaurants, movie theaters, nightclubs, and bars. (You’d probably never do this independent of the application.)

Next, it asks you to choose your favorite spots from the big list of places in each category.  Now you’ve officially created your very own exclusive list of places to wine/dine/and play in and around your hometown, just for your friends to see. 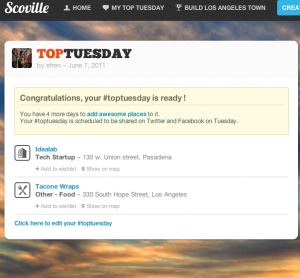 So what’s the #TopTuesday? It’s a personalized update you receive each Tuesday with the top places you and your friends checked in and loved. The folks over at Scoville compile the data and rank them as the top locations in the city. Imagine it as a personalized group concierge service. Isn’t it nice to know that all those check-ins don’t just disappear into the abyss if you aren’t crowned mayor of a place. Plus, it makes it easier to keep up with and share those first time check-ins with your crew by adding them to your #TopTuesday.

Is it a Foursquare rip off? Well, its interface, fonts and icons are comparable but that’s where the similarities end. What Scoville does beyond Foursquare is worth checking out, especially since it’s almost summer. Longer hours to play means you’ll be itching to check out new places. Alleged to be gaining steam with users, people are signing up.

However, there are some obvious problems for Scoville, the first being commitment. When you join you have to get your friends to sign up for yet another site. Unless something is pretty revolutionary these days, most people don’t want another account, another password to remember or to grant access to their private data to another application. Do you see where I am headed? Signing up can be more of a headache that help. When I signed up and it emailed my Foursquare friends six of them signed up immediately. This means they signed up just because I was on not because they’d check out the site.

Second, sure it’s pretty cool that the application allows you to organize check-ins, share with your friends and ranks the best ones in your city, but a couple of Foursquare updates could ruin it for these guys in a major way. This way you don’t anger any of your friends with more “sign up now” spam emails. While, the interface is visually interesting and simple looking; technically it can feel rather complicated. Organizing my check-ins from the previous week seemed tiresome and chore like and I was bored after four minutes.

Understanding, the Scoville world is complicated too. Why does one earn points? Why do you need to unlock levels? Are Sims like characters going to appear on different levels of the application?

Overall, the aim of the site is good, but I think that as a Foursquare, Yelp, and Facebook check in user it’s going to have a pretty tough time staying around. If nothing else because those sites are already rumored to be on to phase two of check ins offering group deals. Everybody likes to save money.

Issen Alibris is a world traveler, that happens to call Los Angeles home base. He likes18th century books, beaches, reality television and gadgets. When he's not glued to his laptop, writing, he may be found meandering the meandering the mean streets of Hollywood Blvd in search of the perfect bacon wrapped hotdog.