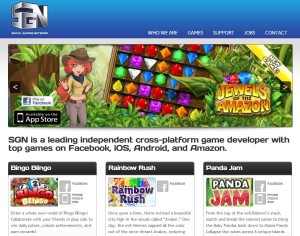 Let’s face it, while the last couple of decades have produced amazing growth in the fields of technology, the economy however has been in a bit of a slump. Luckily, the LA Tech scene is helping to establish a new post-recession era, evidenced by SGN’s (Social Gaming Network) acquisition of San Diego-based developer Mob Science and their current projection of $50 Million for the year of 2013.

SGN, is doing so well in fact that they have begun one of the largest hiring sprees I’ve seen in years with current openings spanning design, production, product management, and more. Attempting to expand their company by 30% in just a six month period, they’re looking to hire top design, production, product management, and engineering talent for their new ‘All Star Team’. Quite impressive for an independently owned gaming company specializing in simple yet addictive games reminiscent of old school PopCap.

SGN is driven by multi-platform game publication directed at user acquisition and retention, (addictive games that fulfill your unending desire to keep clicking and tapping), and are led by MySpace Co-Founder, Chris DeWolfe. Their recent success has them seeking ‘the very best from the talent pool in mobile and social games’ and unlike the big three, have accepted and will be considering those employed by their competitors.

Considering the recent restructuring executed by the major studios I was left to believe that the gaming industry was taking a hit, yet Chris DeWolfe, CEO of SGN, “The state of the mobile and social gaming industry is better than ever, and the proof is in our rapid growth. We cannot hire fast enough”. Hearing a statement like that and bearing in mind SGN’s current state of growth and recruitment, one has to wonder just what the large studios are doing wrong.

Whatever missteps the big guys are taking, LA-Based Startups really are confirming to the world that they’re the place to be. The place to step up and make your mark in the world while being surrounded by intelligent and creative individuals with a voracious drive to succeed. How many other places do you know have companies with more jobs than the company can immediately staff? I didn’t think so.

Jordan can frequently be found either studying for his next certification or tinkering with his latest tech acquisition. Whether it's Wi-Fi, VR, Networking or 3D Printing, Jordan's eyes are on the latest and greatest.