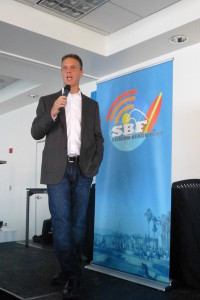 Whether you were a startup, an investor, a blogger, a fashionista, or someone just curious about what is happening in Santa Monica aka “Silicon Beach,” the recent Silicon Beach Fest had something for everyone which included panels, parties and more.

My particular interests lay in what investors look for and the value of participating in a multi-channel networks hence my coverage of those aspects, although there were quite robust content, fashion. gaming and mobile tracks others took advantage of during the course of the three-day conference held consecutively at ROC, Cross Campus and Santa Monica Place.

It was quite inspiring to hear other startup founders who started businesses in their apartments share how they turned their small companies started with maybe one or two others, into multi-million enterprises with hundreds of employees and never-ending growth in sight.

One such entrepreneur was Adam Miller, Cornerstone OnDemand, CEO, who kicked off the conference at ROC.

He shared his three P’s of success which soon expanded into four as he spoke about Silicon Beach and the power of Place in a startup’s success. Having never lived in Silicon Valley and unaware of what it is like to start a business in the heart of technology, it was interesting to hear that one of the benefits of living in Los Angeles during our time of tech growth is the fact entrepreneurs aren’t caught up in the daily routine due to the smaller pond aspect.

He said it’s easier to get to know the tech community down here and you’re not competing with thousands of startups like Silicon Valley, more like hundreds.

Another interesting point he shared was the fact he boot-strapped for almost seven years before hitting it big and as a result, was very disciplined. Other “P’s” he suggested as important to a startup’s success involve hiring the right people; he was involved with each new hire until the company hit the 250 mark when it became too much on top of all his other responsibilities.

In case you’re interested in working with his company, they look for smart, cool, dependable and visionary employees who will fit within their culture. This advice was helpful to hear as I build up my team. Create a “culture by design” rather than just let it happen, Adam stressed.

The other two “P’s” were passion and persistence. You need passion to keep going. Persistence is required at every milestone which generally occurs in 3 million dollar stages. The 3 million mark has a different crisis than the 6 million mark when it becomes more about the culture and your people; and the 9 million mark involves changing systems as you grow.

His one regret was not training people to take over sales sooner because that was a weak area and held back his company’s growth. Adam Miller wasn’t the only one to speak with candor. 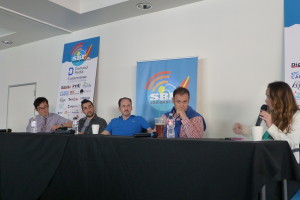 The “Meet the Accelerator” Panel was enjoyable to hear due to the variety of styles and perspectives each person brought to the leadership, vision and mentorship of their various local accelerators. This panel was moderated by Natalie Jarvey, LA Business Journal and included the following panelists:

This discussion was the most interesting to me as I contemplate taking my efforts to this next step potentially and it soon became evident each accelerator operates very differently. I’d heard Sam Teller give an excellent presentation on the startup scene at io/LA, when it was operating, and knew he looked for companies that were further along.

His accelerator selects 20 companies a year out of the 500 which apply and provides 100k in funding to those who participate. Most companies are referred by other VC’s, founders or mentors. Based on his analysis of the most successful founders, they have appeared to be in their 30’s, but I have to wonder if that’s really accurate on a larger scale because that’s his age range and probably the age range of most founders he selects to work with since there’s ample evidence indicating older entrepreneurs have been extremely successful too.

Jeff Solomon also looks for more mature companies and made us all laugh when he shared he’s only made $800 on a startup exit in the past. He also said you’d make more money running a Subway franchise working for someone else than running your own company, but it was a lot of fun to do what he’s doing and he’s meeting great people for when he goes back into business for himself down the road. He had a great sense of humor and admitted sometimes he’s more inspired by entrepreneurs who may not have all their financials down perfectly, but are passionate because financials can be taught, but passion can’t be – it’s either there, or it’s not.

William Hsu runs his accelerator for the love of it too and considers those who go through his accelerator as life-long partners. When considering companies to accept they analyze the market, but more importantly, the team, the traction and validation which was important and repeated often by other speakers throughout the conference. Investors will more likely invest in a person they believe in, but more on that later when I discuss the investor panels.

Now the most quirky and out-there speaker on the panel was Howard Marks. He took an extremely different approach to the other accelerators which made it very fun and lively. Howard wants to turn Los Angeles into the technology hub and as such, will accept most people who apply to his accelerator, even those who have technical skills, but no idea what they want to create. He felt you get them into the program and then the mentors will guide their evolution as a startup.

I personally have heard two female founders speak who have gone through his program and they’re doing quite well which makes me think there’s something to this model, although the other accelerator panelists seems to laugh his unusual techniques away as foolishness. However, that said, Jonathon did concede that Howard is doing a good thing for this space and filling a need.

All accelerators stressed the importance of really thinking hard about your distribution channels, creating a prototype and getting traction. It’s like any business. I’ve seen so many people spend so much money on their image creating the most beautiful graphics, cards, websites and then never knowing what to do to create a successful business once they spent so much money on non-essentials.

I have heard hugely successful entrepreneurs speak over the years and the bottom line they all state unequivocally, don’t worry about what it looks like, just do it ala Nike. Don’t let perfectionism, fear, or lack of knowledge hold you back. You can always learn, find people to help you, and create a minimal viable product to prove something works which can grow or die accordingly. Accelerators are a great place to start.

More on Silicon Beach Fest Investor and Multi-Channel Networks panels and parties next.