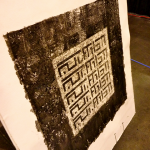 Silicon Valley was abuzz this week (though isn’t it always?).  More specifically, with a current ‘buzz’ industry: Augmented Reality.  For those unfamiliar, augmented reality (AR) refers to the use of graphical or informational overlays onto the real world to provide a mixed reality experience.  Science fiction stuff right?  Not really; prominent and largely used applications like Yelp! monocle or Google Goggles allow you to take pictures of restaurants/objects and give you more in-depth information on the subject.  With the aid of visual cues or prominent AR markers, these apps can spawn 3D objects from flat surfaces to be made viewable on phones and mobile devices.

If you’ve ever seen anyone hold their phone or tablet up to a seemingly empty space and laugh hysterically, they probably weren’t crazy, just enjoying an augmented reality app.

From attending the 2nd official Augmented Reality Event (2011), the AR industry really seems to be getting some traction and moving itself beyond the buzz realm; into something a bit more substantial, seeing an ever-more increasing presence into consumer, commercial, and artistic realms. 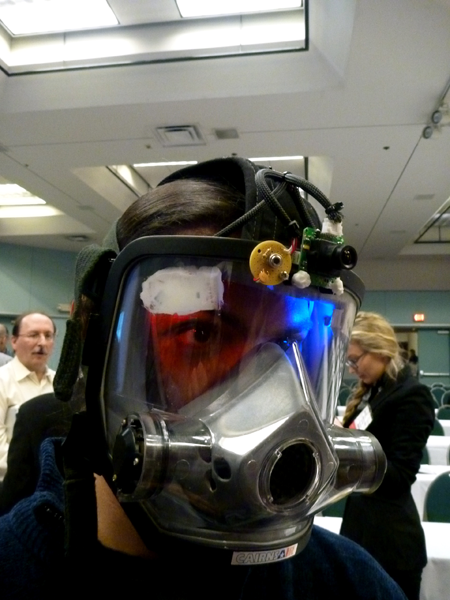 After a red-eye drive to Santa Clara (left at 2am, arrived around 8:30am), we arrived on day one tired, but ready to fulfill volunteer duties.  Being placed at the reception area, we greeted registered guests, exhibitors, and speakers alike.  CEO’s, startup founders, leading programmers and technology officers, there were plenty of prominent personnel at the event.  Only makes sense right?  These are the people trying to create a brand new industry after all.

Keynote speakers for the dual-day conference included talks by technology visionaries Bruce Sterling, Jaron Lanier, and Bernor Vinge.  They touched on plenty of subjects, spanning from deeply cyclical themes existing in earlier science fiction works, how these themes are tying back to present tech, a bit about computing history, bits of human-tech philosophy, and plenty of commentary on where augmented reality fits into all of this.  Key note presentations also included a fantastic presentation by Blaise Aguera y Arcas of Microsoft, discussing in depth capabilities and functionalities of Microsoft’s Bing Maps. 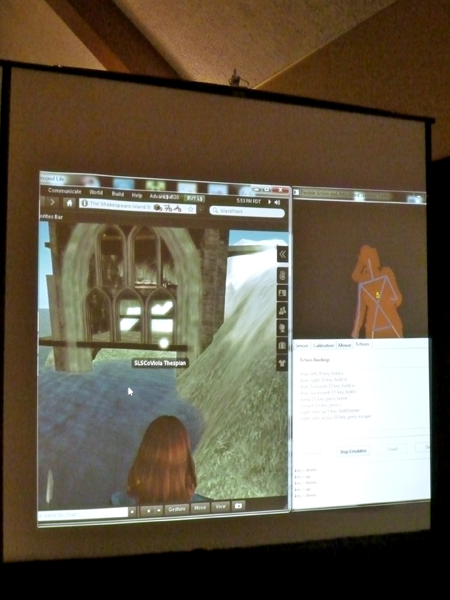 A total of 113 speakers representing 82 companies were on the bill to deliver over 30 hours of talks across three tracks: Business, Technology, and Production & Design.  While I tried to attend every possible talk I could, it was definitely impossible, let alone to cram and synthesize all this information into my head.  The talks ranged from the highly conceptual to the very technical; from giving detailed updates on AR development kits to discussing the story-telling capabilities of AR, everything augmented reality was covered from head to toe, side to side.  AR in the arts, game engine developments, law-enforcement and fire fighting applications, hands-free technology, etc. 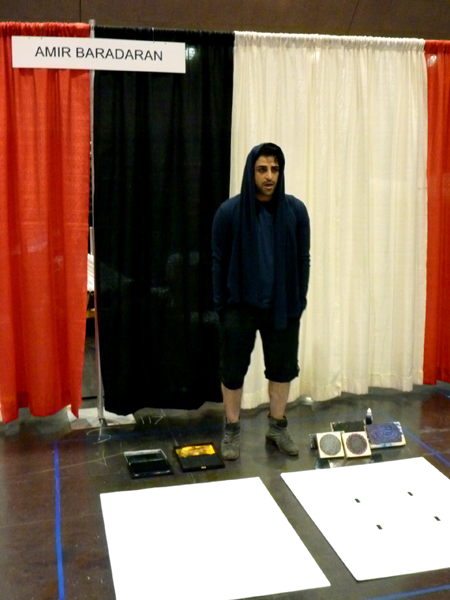 Aside from the speaker presentations there was a full-time open exhibition hall for companies to display their latest and greatest; and an ARt Gala (to close day one) featuring performance, conceptual, and interactive ARt from Helen Papagiannis, James Alliban, Amir Baradaran, Ina Centaur, Sander Veenhof, Rob Rothfarb, Noah Zerkin, Christopher Manzione, and Bob Ketner. 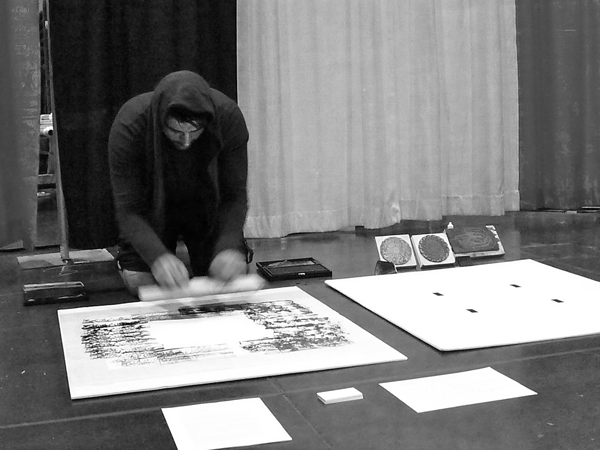 And what would an industry be without some competition?

Among the festivities was a AR start up launch pad, where a handful of AR companies presented their business models and products to compete for Best ARE Startup award.  The winners of this one?  Previznet and their home furnishing app, where users can not only test out furniture in a photo of their room, but remove unwanted objects.

But the big prize of the conference, the 2011 ‘Auggies’ award (voted on by the audience at hand) went to Churchill Navigation for their augmented reality mapping system, for use in law enforcement and military operations.  Think a google maps digital overlay over a police helicopter chase video, with all visible street names and numbers on the screen.  It’s the sci-fi stuff that will make any highway criminal have nightmares.  Simply mind-blowing stuff!  The awards and competition ceremony was light-hearted and fun as expert panel: Bruce Sterling, Will Wright, Vernor Vinge, and Jaron Lanier commented on each demo presentation American Idol style.  From giving constructive criticism to jabbing at wardrobe choice and presentation font colors, it was a hilariously laid back way to present the Auggies award. 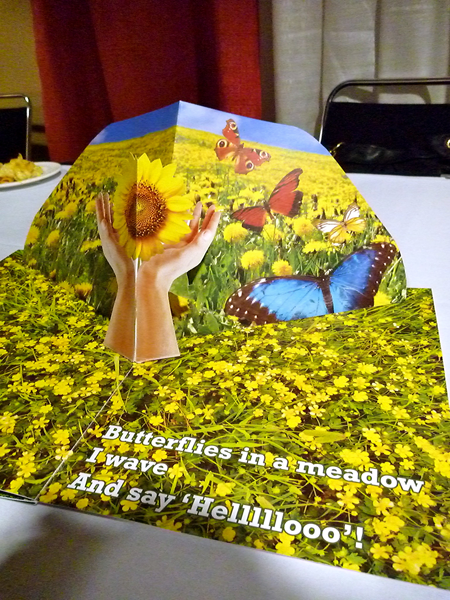 Event festivities closed with an amazing techno-illusion performance by digital magician, Marco Tempest and a final fireside chat with Bruce Sterling and Vernor Vinge.  A no pressure free-flowing insight into some great minds.

What I picked up from the conference:  Though I didn’t go to last year’s inaugural ARE, I was thoroughly impressed with the smoothness of the event.  Speakers started and ended (for the most part) right on time, and a relaxed but purposeful feeling permeated throughout the conference, all to support and guide this fledgling industry.  While the term augmented reality is still unfamiliar with the general population, it’s definitely a growing industry.  It seems like everyone is looking for the killer app though, the one HUGE thing that can potentially change how humans interact with these digital overlays of information.  Something to take it from the science fiction realm of coolness and novelty to practical use for the every day consumer.  Luckily, there’s plenty of companies like these that are searching steadily for that answer.

All in all, a great way to augment my week. (Sorry, just had to).

Check out a few more photos we snapped from the event! 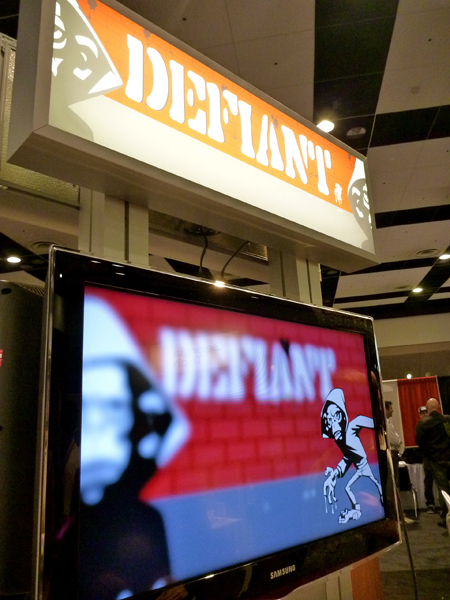 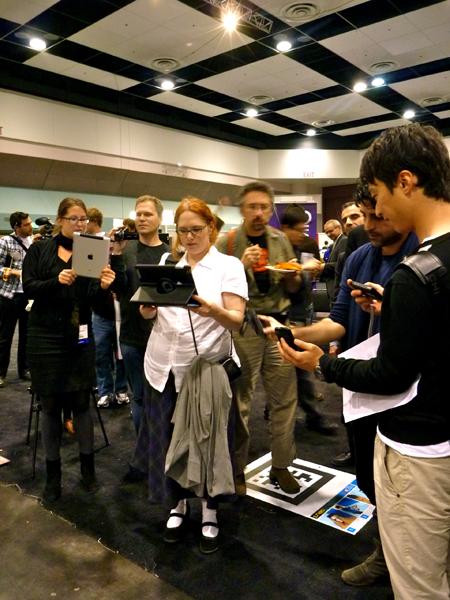 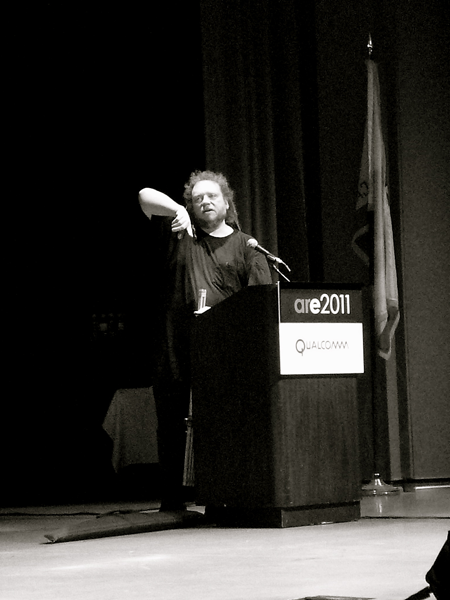 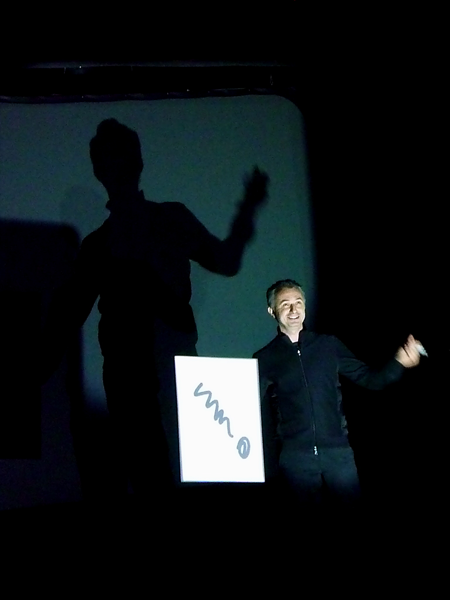 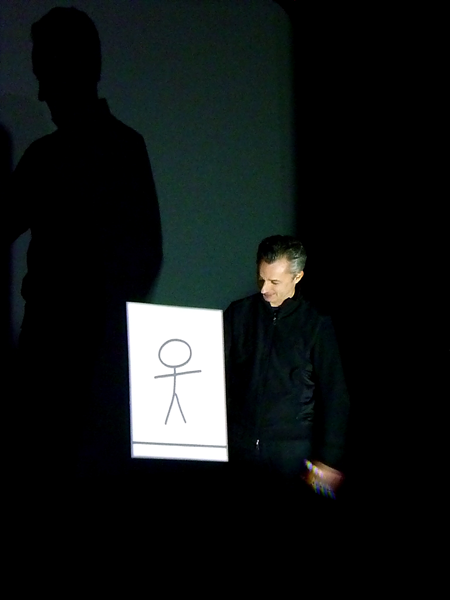