Toyota | The Power of H 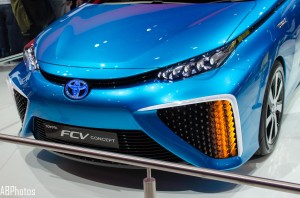 Hydrogen is the most abundant element in the universe.  Unlike oil, it will always be around. At this year’s CES, Toyota demonstrated just how it plans to harness hydrogen power in its future cars.

Hydrogen is the future.  Cars of today produce carbon dioxide and pollute the very air we breathe. Hydrogen cars can only produce water as an end result.  Imagine: the only thing coming out of the tailpipe is something we need to survive.  Hydrogen cars are electric, but instead of using a charging station (a rarity) or plugging in at home, they will be refilled like any other car, but with liquefied hydrogen. 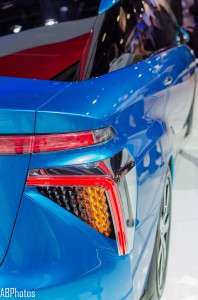 The Toyota fuel cell concept displayed at CES 2014, called the FCV, is a four-door futuristic looking Prius/Corolla combination.  The engine is able to develop 100 kWh or equivalent to 134 HP and in case of emergencies, it can even power your home for about a week.  The range for this car is around 310 miles and does 0-60 in about 10 seconds.  The FCV sounds like an everyday compact car with none of the drawbacks.

Honda was one of the first to publicly test out their hydrogen car, the Clarity, a couple of years back in Los Angeles. It did very well, but the problem was not the car, but the infrastructure of hydrogen stations.  There simply were not enough stations to make hydrogen cars a reasonable solution.

Toyota aims to fix what Honda did not – the infrastructure of hydrogen stations.  Toyota has received $200 million in government aid to help build more hydrogen stations in Los Angeles and San Francisco over the next decade. 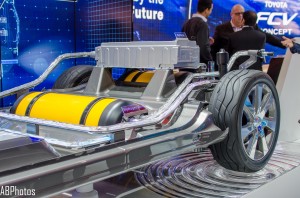 Electric cars will only be a temporary solution to prevent the usage of gasoline.  They’ve been available for years, but have never taken off because of three main reasons: the range, the time it takes to charge, and again, the infrastructure of charging stations.  Electric cars will only exist a little longer until fuel cells take over the automotive market.

Hydrogen cars will likely be the future of automobiles due to their simplicity, but also because of the positive, long term effects they will have on the auto industry.  Oil will be obsolete one day, not because of hydrogen cars mainly, but because we are using so much of it.  Hydrogen is everywhere.  No matter how far we are, even in space, hydrogen surrounds us in various forms.

This is clean tech at its finest – where the resource we are using and its eventual byproduct are both natural, and beneficial.