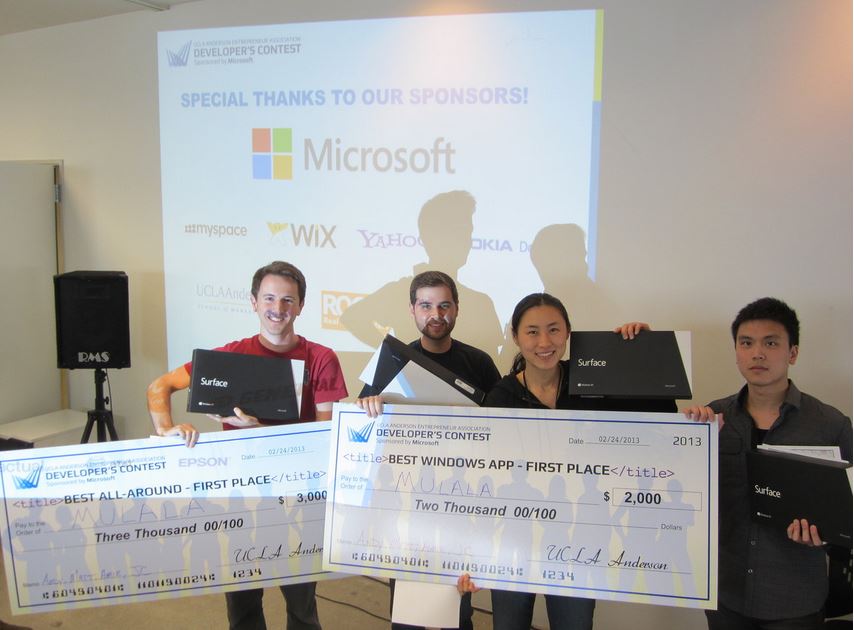 With software developed, tested and turned in, the results of UCLA Anderson School of Management’s DEV Contest were announced on Sunday afternoon to a room full of smiling faces. The winners were given their prizes and their competitors applauded rapidly in their support, a great sign of LA’s flourishing tech community’s mindset of encouragement and coexistence to all that strive to build and create.

Saturday evening, the night before software was to be submitted, the first and third floors of ROC were filled with people clustered into small groups all staring intently at their computer screens. Laptops, Desktop PC’s and a plethora of smartphones were strewn across desks inside of rooms that were almost creepily silent. The only sounds to be heard were keyboards, mouse clicks and faint whispers as the competing teams labored aggressively to stabilize their software before Sunday’s deadline. When I walked into the office, looking for a representative of the DEV Contest, not a single person looked up at the pudgy guy wearing a heavy leather motorcycle jacket with a backpack and helmet in hand. Obviously these folks were serious about winning this competition, and had no time to worry about who the guy taking pictures with his iPhone.

I walked the entirety of the first floor before coming across a friendly face emerging from the kitchen at ROC who directed me to the third floor to find one of the event organizers, Calvin Ho. Calvin greeted me with a smile and a firm handshake before giving me a brief guided tour of the facilities and providing some background info on the event. The Entrepreneurship Association of UCLA Anderson School of Management hosts a DEV Contest every year, the goal of which, as stated by Calvin, is “to make it fun, increase awareness of entrepreneurship, taking risks and dreaming a bigger dream”.

In previous years, the Entrepreneurship Association has had some difficulty in raising awareness about the competition and promoting participation. Last year’s contest had only 20 registered participants, whereas this year, there were closer to 300. To ensure that the 2013 event gained more attention, the team, comprised of Calvin Ho, Bryce Luken, Nancy Quan and Michael Machado, took quite a proactive approach in producing the event this year. They attended other DEV events such as the AT&T Aspire Mobile App Hack-a-thon hosted in LA to spread the word, created an event page and began registration through Eventbrite as early as September of 2012.

Another hurdle that the Entrepreneurship Association had to vault over, which is never an easy task for unknown entities in the industry, was sponsorship. The group initially reached out to a well-known tech entity who responded with a resounding, ‘Sorry, not interested’ when asked if they would like to participate. The group, choosing to refuse defeat, took a step back and looked at some corporate relationships that had already been developed. They then reached out to Yahoo who jumped on board to provide some funding and once they had that name attached, other big names in the industry took notice. Microsoft, MySpace, WIX and Nokia all joined the Sponsors list by providing funds and products to distribute as awards. When I asked one of the competing developers, Phillip Givens, what facilitated his interest in this specific competition, he quickly responded with “The sponsors. Knowing that a company like Microsoft or Yahoo is backing this thing really makes you want to take a chance to stand out in the crowd”. This is exactly what the EA was aiming for, getting people out, promoting them to meet and work with new people while taking a chance at making something new. I say, goal attained.

By Sunday afternoon, all software had been tested and submitted. The teams had rolled up their sleeping bags, changed from t-shirts and PJ’s into casual suits and business attire in preparation for their software demonstrations. The room was lively, some chose to calm their nerves with food and drinks that were provided while others chose to work their way towards the best seating. Everyone was talking, subjects ranged from comparisons of software to successes and failures of companies in the industry. The event had as much of a social atmosphere as a Digital LA, Mindshare or Dorkbot event without any of the social awkwardness that can arise while networking with new people.

As Nancy Quan stepped to the mic to announce that the finalist announcements were forthcoming, the room fell into a silence reminiscent of the previous evening and people began to shuffle towards seats. This lasted for about 30 seconds before the crowd realized that they had a few more minutes before they learned if they made it to the finals or not, and the chatter continued. The list, consisting of – ‘What is Next’, ‘Try, Catch, Fail to Succeed’, ‘Smart Travel’, ‘Team Screaming Goats’, ‘Roaddit’, ‘Mulala’, ‘Jeeves’, ‘Wetfoot’, and ‘Timescape’, suddenly appeared, projected on a wall, for all to see. This was followed by Calvin asking for everyone to be seated and calling the judges to the stage. After a brief introduction of the judges, the teams made their presentations to the crowd. Each product demonstration was followed by an array of ovations, everyone proud of what their contemporaries was able to produce in the short time allotted.

After all the votes were submitted and tallied, team Mulala emerged as the big winner. Winning prizes for Best all-around app, Best Windows app, Most Innovative/Technically Daring and the People’s Choice Awards, Andy Bauch, Matt Hwang, Amir Szekely and JC Jubilo (who had never met before the competition) walked away with around $6,000 and 4 Microsoft Surface Tablets. We’ve got to admit, their app was quite dazzling. As the theme of the DEV-contest was ‘Travel’, the team created a program that takes a picture of any foreign currency, compares the image with data stored in a Database and provides the user with its native and US values. This is something that any international traveler would find useful and we can foresee a bright future for this dynamic group of individuals.

This isn’t to say that those that didn’t win prizes lost in any way. Several teams came up with concepts that have high market value and are currently continuing development. Katelyn O’Shaughnessy, a travel planner, came up with a the idea to create a program that stores, tracks and organizes a traveler’s itinerary, travel documentation, tour schedules and flight departures in one easy to access place on your smartphone. She, Dennis Lesak, Sebastian Werner and Phillip Givens have continued to work together to see this software come into fruition.

Not only did I enjoy watching the event transpire, it helped me to further appreciate the creativity, collaboration and solidarity exhibited by these astounding individuals. I look forward to seeing what concepts are to come in the future and walked away with a realization that we really can all get along.