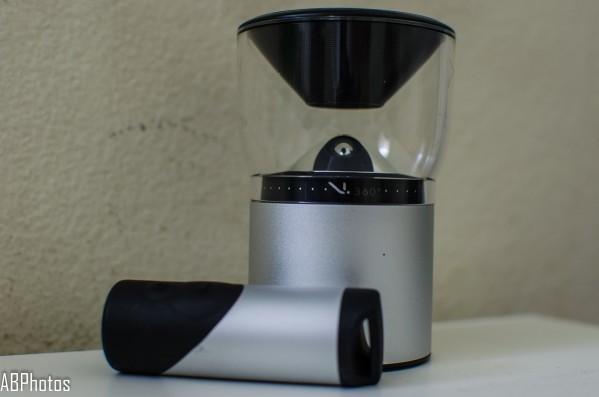 Videos evolved in an unbelievable way since the first introduction of the film camera. GoPros, drones and 4K cameras are headlining today’s video technology; but what else can be done to further evolve the video market? A new video camera from VSN Mobil is looking to capture images and video (and the market) by introducing an angle rarely seen before, a 360-degree panoramic angle.

VSN Mobil released the V.360 in November 2014. The camera offers something very few cameras can do; a new perspective by filming 360-degrees. Finding the perfect angle to capturing a moment is not a difficult task anymore. Place the V.360 in a spot where it can capture the meat of the action and move onto the next shot. That is the beauty of the V.360, the ability to capture any scene at any point.

For example, a dinner gathering is easily captured by placing the V.360 at the center of the table and capturing each guest. No one need to shift position and pose as you would with a conventional camera. Just a smile and “Cheese!” and the V.360 does the rest. Tight spaces also gives the advantage to the V.360 camera. Recording a video inside a car may require more than one camera, but a V.360 placed on the dashboard can record both driver and/or passenger and the road being driven on. Video enthusiasts and professionals will be able to find other incredible angles and creative uses with the V.360. 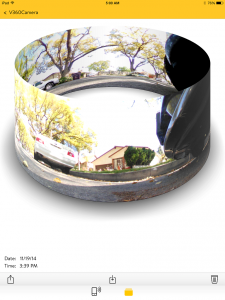 The V.360 app controls and adjusts the camera’s settings and shots. A remote is also included in the package and controls the shutter release and the on/off button and runs off an AAA battery. The sleek and simple app works on both iOS and Android systems through Bluetooth connection. The app allowed users to preview images and videos captured when a lack of a mini-SD/SD card slot or a computer is near their vicinity.

Viewing images and videos show up on a “3D” donut or a flat panoramic to give a better view at specific angles on the V.360 app. The live preview, however, is where the app’s biggest drawback lies. A 5 second delay occurs using live preview, and prevents any quick shots for the user. The live preview should be used for last second adjustments than a viewing screen. An iPad Mini was used to test the app and the battery drainage was noticeable with heavy use of the live preview. If, the preview is used sparingly or left off, the battery drainage should pose no threat for any device.

Settings and modes allowed minimal tweaks to the videos. Modes available on the V.360 app included video, photos, time-lapse and surveillance. Within each mode, a few tweaks could be made to each shot. V.360 comes with a ¼” screw mount, allowing users to fit the camera onto almost any kind of attachment.

The video churns out a nice and steady 30 frames-per-second, 1080p video and images were captured at 8-megapixels. Specs like this may seem standard nowadays, but viewing with those specs at 360-degree seemed more impressive. Casual videographers do not need to worry on purchasing extra equipment for sound quality, as the sound quality turned out clear and distortion-free. Watching previews on the V.360 app is quite a sight as the image plays on a donut. However, viewing it on a computer splits the video into two halves and layered on top of each other. Images provide some great detail and makes taking panoramic shots easier than ever. Taking multiple pictures, aligning and stitching images together take time for photographers. One snap of the V.360, eliminates the tedious process and gets an image worth a thousand words. 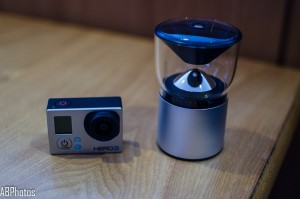 VSN Mobil not only built a unique lens to capture video, but also put in a lot of effort into the design of the camera. A first look, the camera comes off as a sleek, cylindrical sculpture that may look too delicate for the outdoor environment. Delicate would be the wrong word to use to describe the V.360. The camera is built to military standards and rated at IP67 (shock-proof, dust-proof and water resistant) straight out the box. The outdoor activities such as surfing, rock climbing and biking produced some breathtaking videos.

Even with all its great qualities, the V.360 has a few issues. A big problem lies in its price. At $399 ($449 after March 6), there are other options for the average consumer’s need. Another problem is the lens distortion. At close distances (about 1-2 ft.), the top and bottom of the video/image frame can cause a “fish-eye”-like distortion, causing videos/images to have weird and hilarious effects and easily ruin a video/image.

Many people were curious about the V.360 and the 360-degree view brought a lot of positive and interested reviews. It was something they have never seen before. VSN Mobil’s first foray into the video camera market is a unique and delightful experience. The camera does a wonderful job of recording videos at angles rarely seen before and panoramic images are easier to produce. If the V.360 price was more affordable, the camera could capture a larger market and have other companies rethink the angles their cameras can capture.