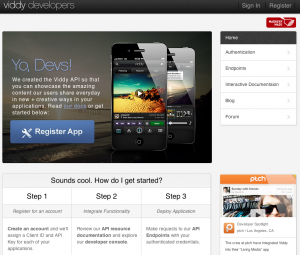 Yesterday Viddy, the social video sharing site announced the launch of their public API for developers to build around the platform and come up with new ways of sharing video.  To top it off they also announced a “Rule the Beach: Hack Your Way into Viddy” developer competition in a blog post:

…Team Viddy would like to invite you to join the Silicon Beach community, by entering our “Rule the Beach: Hack Your Way into Viddy” Developers Competition. Today at http://Developer.Viddy.com we are officially launching our public API, as well as a chance for developers to win a $10,000 Cash Prize and a trip to LA to interview for a position at Viddy! To enter, request permission to our API, and build the most unique & amazing app using it!…

This is a great move on Viddy’s part as it will help bring new innovation to the next wave of online video.  In the process of doing so they are doing a service to the Silicon Beach community.  Potentially giving a few out of town devs the chance to come and checkout the scene here in LA tech.  What developer wouldn’t want the chance to live in beautiful sunny Southern California.

Get on it devs!  You only have til September to have a finished product and submitted to the Viddy team. On Friday, September 28th Team Viddy will pick their favorite API partner, and fly you (or your team of up to 4 people) to Venice Beach for an interview at Viddy.