YouTube today announced its new app for iPhone and iPod touch weeks after its license with Apple to develop and preload the app in the iPhone iPod touch expired.

Now Available on the App Store 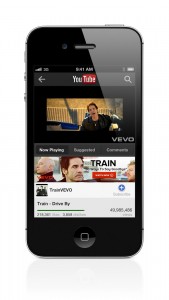 According to the post, the new app is built by YouTube engineers and will give iPhone and iPod touch users the best mobile experience ever.

The new app will allow more ways to share videos with one’s networks and has tens of thousands videos added.

YouTube also boasts of a new channel guide available at just a swipe from the left edge of the screen into one’s subscribed channels giving users instant access to videos they like.

YouTube  claims the new search tools also help users find videos faster as they give hints as one types the search and lets users sort through videos or channels, comments simultaneously as they watching another video.

It also allows you to share on Google+, Facebook or text message in the app, as well as to Twitter and email. To make soup taste better, Google added that its working on an optimized version of the YouTube app for iPad to be launched in a few months.

This added features might be why Google couldn’t renew their contract with Apple, after five years as Apple used to develop and preload the YouTube App since the debut of the iPhone in 2007 but there could be more.

In the post Doronichev says YouTube on mobile has over 1 billion mobile views a day and expect the new move to even better the views.

However, Google on Monday updated the iOS app allowing users of the Drive app on iOS devices to edit documents in the cloud.

Anil Sabharwal, Senior Product Manager in a blog post said users of iPhone or iPad, can now create a new document, edit an existing one or format text just as Android app users and with ability to see what other people are editing.

The iOS Drive app was also be updated to allow users view Google presentations on iPhone or iPad. The presentations have speaker notes, full-screen mode and can be swiped between slides.

Sabharwal added, “You can also create new folders, move files into folders and upload photos and videos from your device directly in the Drive app.”

Google says that as more people move into doing things in the in the cloud, it wants to make their experience as seamless as possible, Google Drive is one place where you can create, share and keep all your stuff. Google’s Drive App is available on the web,  Mac, Windows and Android and iOS devices.