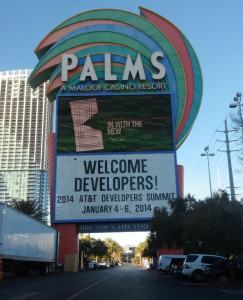 AT&T  held their 6th annual developers summit in Las Vegas this year at CES 2014. Several updates and announcements were made while also presenting the top 6 apps created during the weekend hack-a-thon. (The AT&T Developers program provides APIs, SDKs and developer news. Members might also get invited to cool events such as this Developers Summit. http://developer.att.com/)

Included among the new releases discussed were:

From enterprise brands down to small business, companies now have an option to pick up the bill for wireless data and sponsored content whether it be video, apps or other such services.  Similar to how 800 numbers work, the charge goes to the company instead of the consumer; thus allowing customers to freely browse and interact with their platforms.  The data usage will still appear on your bill, but show up as provided by each participating company. More here: AT&T Sponsored Data

Apparently AT&T is looking to see your car as “a smartphone on wheels.” With 16 million new cars on the road a year and 165 million cars that will have connected capability; they’re partnering with solution providers to provide a more connected and safer driving experience on the road. AT&T is building a 5000 sq. foot facility in Atlanta, GA under the new AT&T Drive program with a tagline of  “Transform the connected vehicle to mobilize life”  More here: AT&T Drive

AT&T’s home safety security solution. Interact with your house by using your smartphone or other mobile device as a remote control. Launched in April of 2013, Digital Life has now been introduced into 59 Markets with an industry-leading NPS.  More here: AT&T Digital Life 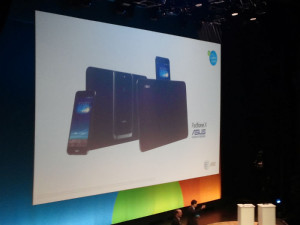 Collaboration with ASUS and the PadfoneX

Asus is introducing the PadfoneX to the US market through a partnership with AT&T services, a 5″ 1080p Android smartphone that docks into a 9″ tablet. It’s a two-in-one dual phone and tablet combination using just one data plan. Sign up here for more info as it becomes available: ASUS PadfoneX

Interspersed between these announcements were two separate rounds of pitches from the weekend’s hack-a-thon. Each round consisted of 3 finalists that each had 2 minutes to present their app. The audience was then asked to text in their votes and here are the two winners: 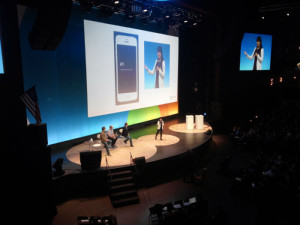 An app that turns nearby mobile users into your personal ATM. Can’f find a brick and mortar ATM? Not to worry. Just locate the people around you who are also tied into this app and simply pick up $20 cash directly from them.  AT&T Developer Summit Hackathon 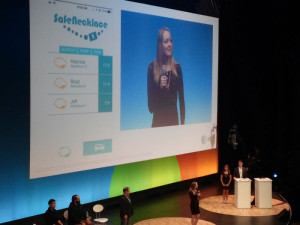 A device designed for children that will give off an alert if they begin to wander away from their teacher or buddy after a certain distance. What a simple way to better utilize available technology.    AT&T Developer Summit Hack-a-thon

Good things coming from AT&T in 2014. The future looks bright.