Blowing Up the World of Home Video Licensing 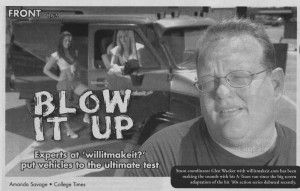 Jackass, TheDudesons, America’s Funniest Home Videos.  Normal people get paid every day by TV networks wanting to get a hold of stunts, pranks and home videos that tickle your funny bone.  Question is, how do these non celebrity everyday people form relationships with the TV execs and what exactly are those execs looking for? I had the opportunity of interviewing some key people in the world of video licensing to explore how the industry works.

Making TV shows using home videos is one of the cheapest types of shows to make so it is very sexy to the networks as their chances to gain a higher return on investment increase with the lower overhead. In 2007 there was a huge surge of home video clips airing on TV along with docu-style shows, aka reality TV,  eventually taking over the airways and knocking out professional actors one by one. Networks are constantly looking for new material and are spread thin when having to scour the internet sea to find these tiny gems.

Teresa Tubera has worked as a show clips producer for huge networks such as TRU, TMC and MTV. Her job has been  to find great home videos to air on television.  In her search for content Teresa discovered a company called JukinVideo, founded by Jonathan Skogmo.   “JukinVideo and businesses like JukinVideo have changed the industry and made my life a lot easier. For producers every season we’re looking for 5000 clips and individual material.  It’s completely changed the business so now we can have a library.  So we can say we are looking for Jack Ass stuff now and JukinVideo can send me 20 clips.  It’s made my life easier and made the process faster.”

Videos also need to be licensed for TV shows to safely use the footage as the network needs “worldwide all media perpetuity”  rights so that it can air indefinitely and globally, anywhere, and without further consent. Getting a license is covering the network legally. Additionally networks need personal releases so that the network has everyone in the clips permission, if someone extra in the video doesn’t want to be on TV they can be blurred. So a video licensing company becomes the middle man between the people who made the video and the TV producers. They work to find great videos and form relationships with the content creators so when the TV producers are ready they have a one stop shop to go to for material to use on their TV show. If someone has the right clip JukinVideo and companies like it can sell it to 10 different shows. One girl was filming herself talk backwards and tons of people wanted to have her on their shows so every time that clip was aired she got a licensing fee.

In regards to income , Teresa says for most people, “It’s a good college part time job, not pizza money, but if they were dedicated and had the right representation it’s a side hustle. People who do make insane amounts of money, like ‘DavidAfterDentist’, are super lucky.”

Glen Wacker of WillIMakeIt.com, is a content creator utilizing video licensing to turn his weekend hobby into a full time revenue stream. He calls himself, “the Jackass of cars.” People donate really good cars that just need some mechanical loving like Lexus, Mercedes, Jaguars. Glenn and his father fix it, drive it around for a couple months then destroy it. He says, “We’re red neck top gear.”   For instance he has tested how a car can run with soup in the engine.  At first he was surprised he got paid for one of his clips as he was just doing it for fun. He said, “ I didn’t expect it to become what it has become now.”

Here are the types of  homemade content TV networks are looking for; stunts and pranks (!!keep in mind nobody wants to buy clips where someone would intentionally hurt themselves, so keep it safe!!), cute baby clips, sports mishaps (again, has to happen naturally), elderly people and pets