E3 brings out developers to show off their future games to the masses.  One of the biggest events in the gaming industry, E3 sets out to give gamer’s a look into some exclusively announced games and a preview of what the future has in store for the industry.  Techzulu presents a quick first look into a few games coming out in the near future, such as https://slot27.id/. 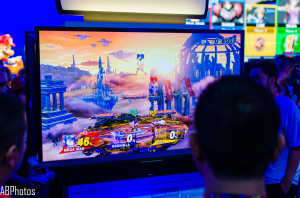 The game every gamer is looking forward to…or so how it looks on the show floor.  There were at least a dozen stations allowing attendees to play and spectate the game.  Crowds gathered at the front of Nintendo’s booth to see what one of the video game giants had in store for its fans.  Nothing has really changed much – except for the graphics and playable characters – since Super Smash Bros. Brawl.  This doesn’t mean it’s a bad thing.

Super Smash Bros. looks to keep gamers on their toes with fast combat and new level designs.  After a couple of (losing) rounds, the game improved upon level design and the fighting mechanics.  Attendees were treated to 20 characters to choose and beat senselessly, while more than 30 characters are reported to show up in the final game.  Friends will become enemies once more as you bash and knock your “friends” off the map. To help you in your chosen game, it would be beneficial to read details such as feats 5e. 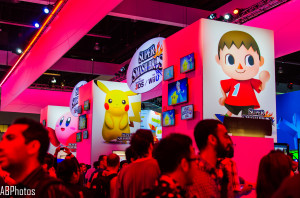 When a handheld game is released simultaneously – or around the same time – as the console game, the handheld iteration is usually terrible thanks to the console version getting more of the development attention.

Not with this version.  They did not skimp out on this game.

Yes, the number of characters available to play were smaller than its console brethren, but the handheld version still offered enough characters to keep those on the road just as busy as they were at home.  The graphics “cel shaded” presentation looks quite different than the console, but gamers are allowed to have the lines look normal or less “cel shaded”.  Instead of playing a battle royale with other players, I opted for the Smash Run.

Smash Run is simply a side-scrolling beat-em-up.  Using any of the Super Smash Bros. characters, you are timed for 5 min. to beat as many enemies possible.  At the end of each 5 min. round, you are then forced to play three other computers in traditional Super Smash Bros. fights.

The Smash Run was decent, but I will be focusing more on the playability for off and online modes while laughing at the tears of my challengers. 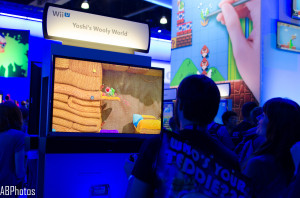 Yoshi’s new games is possibly the cutest game ever – even more so than Kirby’s Epic Yarn.  The graphics were incredible and colorful.  Each landscape and character looked knitted and crocheted.  The design is epic in short.  The animations of Yoshi look absolutely adorable and makes me want to reach out and grab the cute little dinosaur out of the TV.

The game demo was simple and sweet.  Gameplay is similar to New Super Mario Bros. and Super Mario World 2: Yoshi’s Island – except the game only has 2-players instead of 4.  The demo level had plenty of secret pipes and entrances for gamers to explore and more hidden items to search throughout the levels.

Yoshi’s Wooly World is full of character and can cuddle your heart to death. 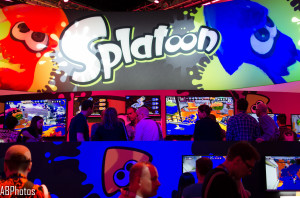 It looks like Nintendo has a new IP up its sleeve.  The 3rd-person splatter debuted at E3 and provides gamer a kid-friendly and colorful approach to competitive gameplay.

The demo only allowed us to play a mode called “Turf Wars”.  Just like the title suggests, each team must take control as much of the area as possible.  By using a gun that shoots ink, whoever covers the most area in their own colored ink, the team wins.  There is only a limited amount of ink each person can use, but should refill slowly overtime.  However, the player can refill ink even faster by turning into a squid.

The character dives into their ink and gains two abilities.  Faster movement and sneak mode.  The player can dive into their team color’s ink and can move quickly and sneak up towards enemies almost undetected.  Players can also jump through gates and platforms easier in squid-mode.  Touching the other’s team colored ink however, and you’ll be slowed almost to a halt.  There is also use of a super weapon temporarily as players can gain by racking up points throughout the match.  The ink gun turns into an ink bazooka and shoots small tornadoes of ink.  Really devastating stuff.

Players are ranked at the end against the other team and your fellow teammates.  The squid shooter is a nice break from the traditional competitive games out in the market.  Nintendo seems to be expanding their lineup and the future is looking pretty good if there are new IPs in Nintendo’s horizon. 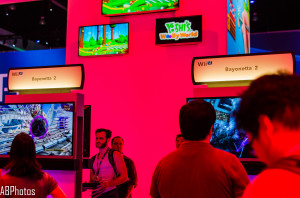 The crazy developers at Platinum Games are at it again with Bayonetta.  The game – simply put – is ludicrous.

The demo started me off on top of a fighter jet fighting off “angels”.  After a few beatdowns, a boss-like character decides to end my fun by cutting the jet into pieces.  Bayonetta using her “Witch Time” powers allows me to do a QT event and jump my way onto a moving train.  Another boss decides to come get a nice butt-kicking from me and all of the sudden the train gets derailed in the middle of battle where Bayonetta finally ends up on solid ground.  It took 5 minutes at least, before I actually ended up on solid ground.  Then after a long fight with the boss, another boss appears and suddenly Bayonetta grows a pair of wings and the monster dragon is climbing up a skyscraper.  The fight gets taken into the skies and things just go absolutely berserk.

The game is just as crazy and over-the-top as the first.  A female protagonist who does all the ass-kicking is back and better yet, Wii U owners get a bundled version of both Bayonetta 1 and 2.  The first Bayonetta has been redone to mix some Nintendo costume and effects, which make things even more ridiculous than it already is.

Bringing the Toad mini-games from Super Mario 3D World, Toad gets to star in his own game for the first time.  The game is a quick action-puzzle game.  Each level is small and only a couple minutes long at most when I got my hands on it.  I only was able to play two different levels and they led to some simple puzzles and nothing much else.

The first was a simple introduction to the game which required you to use the camera and time your movements.  There is no jumping or running in the game.  Just a slow walking mushroom which you must time right or you end up losing a life.

The second level gave a bit more into the creative ideas in the game.  The level put me into a mine cart, where I would shoot turnips at enemies and treasure.  The Wii Pad screen would let you view the cart ride in a first-person shooter mode and gave a whole new element to the game.  I am pretty interested in what other creative levels that may be waiting for us.

For now, the game had very little to show.  Maybe in the future, the game will have more gamers interested.  For now, I’ll be waiting for the other future titles Nintendo has in line. 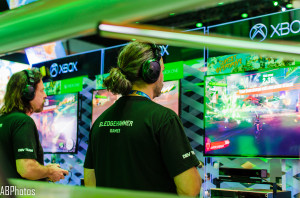 Run, jump, grind, wall jump.  Shoot a few rounds of the TNTeddy (a teddy bear infused with dynamite…).  BOOM!  Jump, grind, and fire away with the Hi-Fidelity (razor-sharp vinyl records)!  Watch baddies explode in a beautiful globs of orange.

Insomniac’s trademark of crazy guns – from Ratchet and Clank and Resistance – show up for some insanely stupid fun.

Sunset Overdrive is set in a post-apocalyptic city, where an energy drink, Overdrive Delirium XT, has some nasty side-effects on the people who drink it.  Citizens of Sunset City are transformed into hideous orange monsters who are out to get anyone and everyone.  The open-world shooter is full of insane and outrageous moments.  The brightly colored world and cartoony looks give Sunset Overdrive some of its unique appeal.  The true unique-side of Sunset Overdrive is the pace of the game.  Players must be on the move constantly.  The more style points you earn, the more abilities and perks you are able to unlock.  Plus, it’s a sure-fire way to staying alive.

The demo placed us in an 8-player co-op mode called Chaos Squad.  My team and I had to protect two vats of OverCharge from being demolished by waves of monster.  We had access to eight different guns, ranging from the AK-FU (typical assault rifle) to the Captain Ahab (harpoon oozing and Overdrive).  We were able to set a number of traps in between waves to help keep uglies away from our OverCharge.

Full of explosions and fast-paced fun, Insomniac is once again having gamers take up some ridiculous guns and apply them to stupidly fun challenges.

The game is MASSIVE.  I can’t compare it to Forza Horizon 2 right now, but knowing it will take at least 2 hours to drive from one side of the map to the other is pretty ridonkculous.  A game based on creating a crew (up to a 1,000 members) and achieving goals together rather than alone.

I had a chance to play two missions.  Normal race and a chase mode.  Chase mode required my team and I to takedown a fleeing Ford F-150, while we chased in our upgraded off-roading Porsche Caymans.  Not cars you would see on the dirt road, but makes it more interesting.

Normal race is pretty self-explanatory, but for those who have been living under a rock; your team must race another team and must finish the race in the highest positions altogether.

The Crew had some interesting team ideas, but I wasn’t able to delve into more of it.  The map and the level of detail were amazing.  Cities were huge, while back roads were beautiful landscapes.  The greater thing was, I never experienced load times – except when I fast traveled to another location.

Ubisoft has an interesting race concept, but the lack of delving deeper into the game left me with not much to go back for more right now.  Once the game comes out on release and I really get my hands dirty on the game, maybe I’ll see what Ubisoft’s vision for The Crew is.

There are more first looks coming up within the next couple days.  Watch out for more news!