For most the dreams of becoming a guitar shredding god are lost if not playing since your youth.  Although you may not be able to become that mega star on stage playing the Hollywood Bowl, you can still become the guitar shredding god of your household.  Music Prodigy is changing Music Education through its patent-pending technology and proprietary teaching method that enables any aspiring musician to learn any instrument, at any level of expertise, anywhere an iOS device can reach.

Music Prodigy gets you playing the right notes at the right times along to some of the world’s greatest artists within minutes. It does not replace traditional music education, but makes the experience of learning an instrument fun, rewarding and social, affordable and accessible.  Rock Prodigy, the company’s first in a series of interactive music products, enables fans to learn their favorite songs directly from the artists themselves like never before. 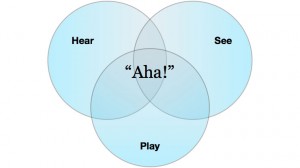 Basic lessons come with the app, with more advanced lesson available for a small fee. An in-app store lets you buy songs, chords and scales to learn, with prices ranging from free up to $2.

Since their launch the company has been working with world renowned artist and bands such as Dave Mustaine, The Offspring, and the Greatful Dead.  Each artist and band have their own custom built applications powered by Music Prodigy, providing the same helpful learning tools that their flagship application Rock Prodigy provides.

Check out the team in the video above and get to know the folks behind it all.