Silicon Beach Fest Hollywood, LA Tech Summit, and Idea to Screen | Why You Need to Attend Any or All 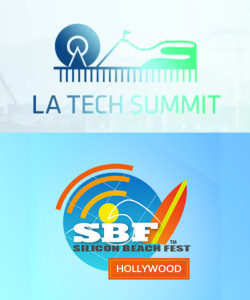 The intersection of entertainment and technology has been a long time coming. Those who are more involved in traditional entertainment are seeing a major shift online which is why an additional one-day seminar was created to coincide with Silicon Beach Fest Hollywood as a partnership called, Idea to Screen. This one-day conference has been created and produced by David Beebe Projects led by Emmy winning Digital Entertainment Executive and Producer, David Beebe himself.

LA Tech Summit takes place the following day and takes a more comprehensive look at the entire tech eco-system in Los Angeles, not just Hollywood. “The one-day event will bring together leading executives, entrepreneurs and professionals to celebrate this diverse L.A. tech community and to discuss the opportunities and challenges facing us in the coming years. 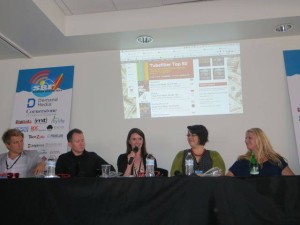 All events are going to be quality one-day conferences with amazing speakers, parties and opportunities to network with new friends and see old friends which is why I’m returning to attend.

One aspect of this past summer’s Silicon Beach Fest (SBF) I personally enjoyed, among everything else presented that weekend, was learning all about the new multi-channel networks available to showcase online content.  All of the panelists admitted it was like the Wild West because there were no rules and everyone was just creating what this new online video channel would look like as they went along.

That said, YouTube Network Fullscreen platform is blazing this new trail with 2.5 billions of views and 200 million monthly subscribers while Awesomeness TV, which skews female tween/teens, boasts  82,007 channels and 2,450, 836,855 views.

Another representative during SBF, Maker Studios is, according to their website, “the only network that provides partners a full range of vertically integrated services including development, production, promotion, distribution, sales, marketing and merchandise services.” It’s like having an online studio helping independent filmmakers and YouTubers get seen.

Machinima, another participant in the last SBF, considers themselves the “Next Generation Video Entertainment Network for the Gamer Lifestyle and Beyond.” It was really interesting to hear all the different perspectives, marketing tips and how each channel represented on the panel helps those who participate on their channel and the success of this genre.

This is the wave of the future. You either get on board, or get left behind.

What was also interesting to learn is that there really aren’t any channels devoted to adult females since it’s mostly young males 18-34, a prized demographic within advertising, who view online videos.

At least that’s what everyone would have you believe, but Marie Forleo who describes herself as “part business strategist, part marketing maven and part spiritual ass-kicker with a side of hip-hop swagger” has captured the hearts and minds of professional women through her Rich, Happy and Hot web series and business.

She has been interviewed by Tony Robbins “as one of the world’s leading lifestyle and online marketing experts and mentored young business owners at Richard Branson’s Centre of Entrepreneurship in South Africa.” She is redefining how business is taught and using her personal online platform apart from a designated channel platform to do so.

And then there’s Actress, Writer and Beauty Spokesperson, Holly Fulger who is on a personal mission to help women discover their inner-beauty and feel more beautiful and sexy at every age through her Speaking of Beauty web series. Full disclosure, I helped her launch her web series, but would mention her anyway because this is definitely a timely topic and shows there is an interest in adult female content which you can view here.

And last, but definitely, not least, who can ignore the black comedian online powerhouse who is Glozell Green? I remember when she was just promoting herself on Facebook and have enjoyed seeing her evolve into the phenomenon she is on YouTube as seen in her self-description: “GloZell’s wild and crazy life as the the Queen of Youtube. The Mother of the Internet.” 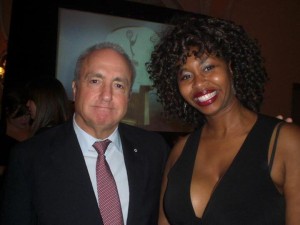 Recently, she even met with Lorne Michaels of SNL fame, her star has risen that high.

Maker Studios sees the value of lifestyle and fashion channels which may be why they were considered number 1 network on YouTube during last summer’s SBF. Online content isn’t a small market, nor is it going away anytime soon. What was interesting to learn is that many new shows were incubated online and then picked up for network TV like “Ultimate Surprises” 36 episodes of surprise marriage proposals sponsored by Honda, Match.com and Robbins Bros.

Margaret Laney of Awesomeness TV said to help facilitate this transition, “Don’t have a lean back experience, have a lean forward experience.” Collaboration was also key. Helping others build their brand helps you build yours. This is true offline too.

Key questions that were part of the discussion included asking yourself, Who are you as a brand? Remember, it’s talent first, then technology.

Despite the fact many of these new YouTube platform channels aren’t turning a profit yet, they’re still cultivating creators, brands and relationships to build partnerships and further develop their platforms in preparation for when there is a profit just as cable did before becoming a viable entity apart from network TV.

It’s one reason CreatorUp, an online web series school recently hosted a Web Series Hackathon weekend to help content creators learn the nuts and bolts of building a successful web series and offers so many other web series classes. While attending the hackathon myself, it was very informative to learn about directing, sound, editing and more and then apply it to creating another episode of Joy’s Travel Adventures project my team and I created in one afternoon.

Under the umbrella of CreatorUp, I gained access to WeVideo.com editing resource which was very helpful too because it simplifies the editing process for those who have never edited before and are just building their brand and web series in lean startup mode. The staff is very helpful and provides great customer service too. Same with CreatorUp. Very impressed with the quality of each.

There’s really no excuse people aren’t creating content they’re passionate about when there are such great resources and opportunities to learn available. Especially when video is the 2nd highest SEO traffic builder and YouTube is the 2nd largest search engine in the world. Regardless of what you’re marketing, you should consider incorporating video.

Oh, and of course, there is always YouTube’s new studio space to inspire you and teach you more on audience development, monetizing content and having the opportunity to use their amazing studio space to create your own content once your series builds an audience of over 10,000.

Here’s a pictorial recap of a recent tour I took during their monthly Happy Hour with my StartupMind group.

You should really consider attending this week’s Silicon Beach Fest, Idea to Screen and LA Tech Seminar on November 13 and 14 respectively. I’m positive if Cornerstone OnDemand CEO Adam Miller’s speech during the last one is any indication of how he runs companies, you can be sure their conference will be just as well run.

This week is a no-brainer on whether to attend or not.:) See you there!