Tony Hsieh is the Seller of Dreams | Enter the Downtown Project 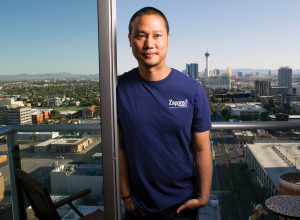 Silicon Valley may still be the capital of technology with a mix of new (Google, Facebook) and old (Apple, HP) sprinkling the landscape. However, Silicon Valley isn’t the only place to grow technology innovators from the ground up. Los Angeles has seen its own startup scene develop with Silicon Beach, which stretches between Santa Monica and Playa Vista. Even the UK has its own version of Silicon Beach off the southern coast of England, a region supported by local governments and universities to accelerate the growth and development.

There’s no single pattern or sign that sparks startup culture; it doesn’t necessarily depend on history or one giant company pushing through. Instead, these regions develop out of a shared sense of community, which means that it can spring up anywhere — even a place as unlikely as downtown Las Vegas.

These days, downtown Las Vegas may be best known for the Fremont Street experience and the surrounding historic casinos. However, away from the glitz and glamour of the strip, downtown Vegas is undergoing a massive restoration project. Simply dubbed the Downtown Project, it’s spearheaded by Zappos CEO Tony Hsieh. Hsieh’s got quite a personal stake in the matter — $350 million to be exact. That money is being distributed across real estate, educational, and local business redevelopment, as well as moving Zappos into the old City Hall in downtown Las Vegas.

“As corny as it sounds, Tony Hsieh is a seller of dreams,” said Sarah Evans, founder of PR firm Sevans Strategy and social media venture FAVES + CO. “So many thinkers, developers and entrepreneurs want to bring their idea to life. They think, ‘if only…’  and that’s exactly what Tony and the Las Vegas Downtown Project offer: the ‘only.’ Whether it’s a financial need, housing or the very real need for community, it’s here.”

History shows us that city redevelopment can take many different forms. In some cases, it’s condos and restaurants to bring the general population. In other cases, it’s strip malls and shopping to generate foot traffic. Because the Downtown Project is led by a technology mogul, it makes sense that Hsieh has set aside part of the budget to bring in startups and help them bloom. So far, the Downtown Project has been successful in attracting top talent away from other creative markets. Some of the standout technology innovators include:

ClippPR: ClippPR provides businesses with a simple way to track any type of online activity — press releases, videos, blog mentions, etc. By using ClippPR’s tools, each individual piece of press can be clipped, tagged, and tracked, giving you a transparent perspective of where and when the conversation takes place.

Digital Royalty: Since 2009, Digital Royalty has given businesses and media personalities groundbreaking social media strategies to engage fans and generate tangible traction. From outside-the-box campaigns to traditional marketing methods, Digital Royalty doesn’t care if it’s new or old as long as it works.

Hachi: Hachi puts the “networking” back in social networking. Whether for personal use or professional contact, social networks provide one of the most efficient ways to get introduced — but do it wrong and things can quickly go downhill. Hachi utilizes a proprietary algorithm that examines social networks to determine the best path to introduction, then goes one step further and facilitates it.

Romotive: Everyone loves their smartphones and everyone loves robots, so what happens when you bring the two together? Romotive has created Romo, the app that acts a digital brain for a robot. Turn on the Romo app, plug him into the roving base, and watch what happens. Romo comes with face detection and can be trained to do a wide range of things, taking the idea of a “virtual pet” to a whole new level.

These four are just a handful of what is currently blooming due to the Downtown Project, and the potential for growth is unlimited. What’s the secret to a successful community? “We have large market potential with a small market community feel. People here have truly prioritized working together over competing for no good reason,” says Andy White of VegasTechFund. “There is an energy in the area that can only be understood by coming to check it out for yourself. The foundation of the ecosystem is growing exponentially each month.”

talkTECH is a technology-focused, marketing communications firm offering solutions for today’s most innovative, emerging tech brands and new-to-market products. To date, the company has executed over fifty product launches in the mobile, software, e-commerce, and IT sectors.