The Webcam Social Shopper (WSS), is now available as an official module for PrestaShop’s apparel merchants. PrestaShop is one of the fastest growing ecommerce platforms in the world (with over 127,000 stores and counting), and the launch of “WSS For PrestaShop” marks the first time any ecommerce platform has offered an augmented reality (AR) module to its e-tailers.

The module provides PrestaShop’s apparel retailers with immediate integration of a piece of software that turns their shopper’s webcams into interactive mirrors, instantaneously providing a visual and social experience. To do this WSS uses a webcam’s live video feed, a motion capture interface, AR and Facebook/Twitter integration to replicate that offline moment at the rack where a shopper holds a dress or blouse up, turns to a friend (or the mirror) and asks “what do you think, is this me?”

“Retailers are finally realizing that the bulk of their revenue, be it online or offline, is tied directly to the experience that they provide online” said Matt Szymczyk, CEO of Zugara. “WSS was developed to give retailers an actual online shopping experience right ‘out of the box’. It’s fun and engaging; It’s proven to help sell clothes; and, it’s a word of mouth marketing platform. In sharing their looks, and asking friends what they should and shouldn’t buy, shoppers are also sharing the retailer’s content as well as their tacit approval of the site.”

“Last time I checked over 140 retailers had already downloaded our module,” said Matt. ”Today’s a day for Zugara that’s been three years in the making. To see this sort of immediate response from retailers is incredibly validating. And this is just the beginning, our new ecommerce platform API was developed so any platform can easily offer WSS to their retailers.”

1) The shopper is interested in an item, but not sure she wants to buy it yet. So she clicks on a call to action on the retailer’s product detail page. 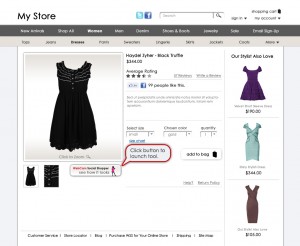 2) An overlay is launched, her webcam is activated and the she takes a few steps away from her computer. 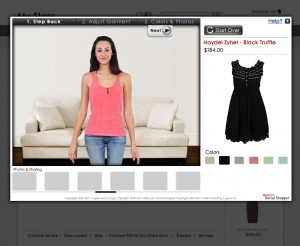 3) The dress she was looking at is instantly placed right in front of her. Now she can have that “at the rack moment” and better judge if the color and style are right for her. 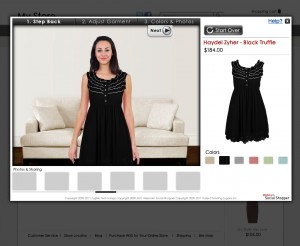 4) Using just her motions, she can now snap photos and see additional colors of the dress. 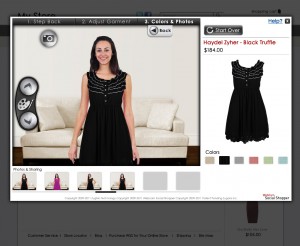 5) Finally, sharing her photos (so she can find out what her friends think) is incredibly easy. 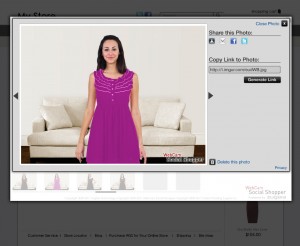