Apple Uploads U2 Album to Our iPhones and iPads and I Feel Violated! 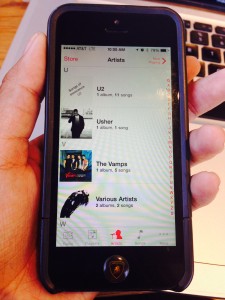 If you haven’t noticed yet, Apple decided to shove U2’s album down your throat.  And I’m not exaggerating! Ok..maybe a little. But seriously, go check. Depending on how your iCloud is setup, their latest album will most likely be in your Music app, ready to play or in the ether of your iCloud, available to download.

Yesterday, I picked up my 13 year old daughter from school and as we’re driving home she asks, “Who is U2?” I thought it was a random question but I replied and said they’re a band. She said, “I think my iPhone has been hacked or something. Unless you or daddy downloaded it.” Initially I was confused. Her dad doesn’t listen to U2 but I advised her to ask him anyways. Once I realized how it got there, I was furious.

So, if you’re just as confused as I was, here’s what happened. At Apple’s iPhone 6 launch event a few days ago, Tim Cook and Bono partnered up for the world to see just how easily it would be to release an album to millions and millions of devices. Cook proudly claimed the album release the largest in history. This rather awkward display put Songs of Innocence in every iPhone, iPad, iPod or any iTunes account everywhere. 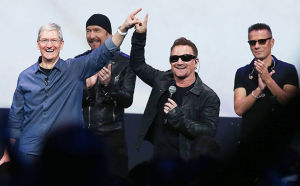 Why am I furious? And why should you be? I do not listen to U2. Nor do I know if their music is appropriate for my child. (Sorry in advanced to die hard U2 fans, I know you’re out there!)  Do I even want her to listen to whatever message their song is communicating? The answer is I don’t know. What gets me upset is I should have the choice on whether or not to accept this free gift they want to offer their loyal users. I absolutely feel that my daughter’s privacy and mine as been violated.

Though as consumers we usually welcome free stuff, it seems like this was an act that Apple carelessly did not think through. And quite frankly, it’s annoying.  As much as I don’t want this on our accounts, there’s little that I can do about it. The way the puppet masters have set up this process is you cannot entirely take out music from your iTunes account. You can hide it from the local iTunes account, but it will live on your iCloud for all eternity.