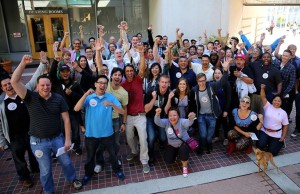 Regulations can be suffocating. Used in the wrong way they might accidentally “Napster” a nascent industry.

Thankfully, the California Public Utilities Commission realized the value of the mobile-based sharing economy by voting to legitimize the rideshare industry statewide. As Liz Gannes of All Things D reports:

The California Public Utilities Commission today approved a decision to legitimize for-profit ride-sharing companies. The ruling should give legal clearance to peer-to-peer driving services from startups like Uber, Lyft, Sidecar and Tickengo, if they meet certain parameters. It’s the first such decision in the U.S.

The CPUC’s decision, which was unanimous, boils down to creating a new transportation category called “transportation network companies” in order to oversee rideshare companies – an idea put forward last July by Commission President Michael Peevey. I liked President Peevey’s idea when it was just an idea. I like it even more now that it’s formally on the books.

By realizing the value of technology and innovation for California’s economy, and smartly supporting the trajectory of the digital revolution, the CPUC has shown regulations can indeed keep pace with the blazing speed of progress. The Commission has also provided a blueprint for other regulatory bodies to follow suit — not just when it comes to regulating the rideshare industry, but for many innovative, tech-based ideas with the potential to disrupt.

As the saying goes, as goes California, so goes the country.   I anticipate that yesterday’s news paves the way for other states to embrace common sense, forward-thinking tech regulations.