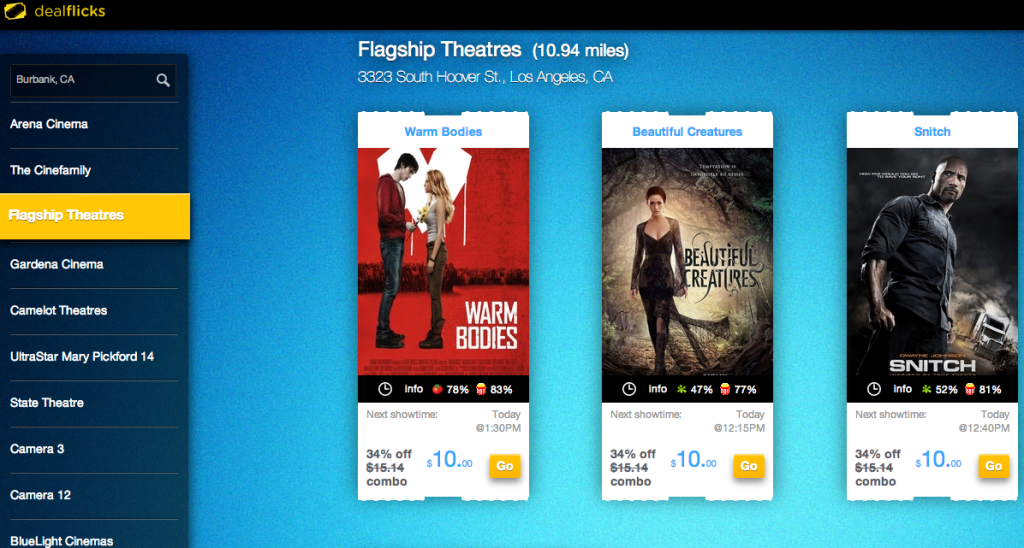 Sean Wycliffe told TechZulu that they  love movies like Star Wars and popcorn and have seen thousands of films but they were hit when they noticed that several movie theaters were not as filled up as they expected. They did some research, and found that around 88 percent of seats were empty and about 95 percent of seats were empty after opening weekend. They then decided to do something about it.

Tell us more about yourself ?

We love movies. Everything from Skyfall in a packed auditorium on opening night to It’s a Wonderful Life on Netflix to Ponyo in an art house on a small screen. We love popcorn and we’ve seen thousands of films. But one thing we noticed was that movie theaters are empty. After doing some research, we found that ~88%  of seats are empty. In fact. ~95% of seats are empty after opening weekend. Something was broken, and we knew we could fix it.

Is the sector lucrative?

How many signups now?

How does Dealflicks work?

Go to Dealflicks.com and select a movie at a theater near you. Select your showtime, and choose your deal (tickets and sometimes popcorn/soda, up to 60% off). Checkout, then show the email confirmation to the box office using your phone or by printing it out.  That’s it! Our iPhone app is coming soon :)

How do you earn from this, and how do Cinema theater owners gain?

We currently take a percentage of revenues that come in (currently 10%). Theater owners love us because we bring them new customers without having to pay any setup fees, monthly fees, or monthly minimums. It’s a win-win :)

You can sometimes get movie ticket deals from daily deal sites.

How unique are you from them?

We charge our theater partners less and offer them more customization. We provide movie deals to our customers 24/7.

Any funding yet? How much?

We’ve partnered with 70+ theaters and are constantly adding new locations.

Growing our base of theaters as fast as possible to match our customer demand.

Fully build out our product and expand nationally.