Kicking Off a 48-State Tour: IdeaMensch Gathers Doers and Dreamers 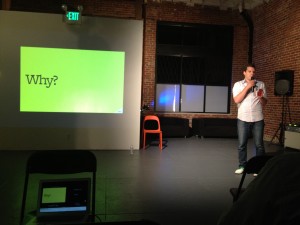 IdeaMensch held it’s third gathering in Los Angeles last week to kick off a 48-state road trip (#IM48) across America of inspiring talks to help innovators bring ideas to life. Founded by advertising digital executive Mario Schulzke, IdeaMensch profiles doers to help and inspire dreamers to seed their ideas and make them grow into reality. The talks center around 4 presentations by innovators that last 15 minutes and walk the audience through the trials and tribulations the presenters faced to bring their ideas into successful businesses. The talks are sprinkled with tips on what to do, and what to avoid and often include free business resources. Schulzke took his own advice and had a seed of an idea to bring his talks to other cities. Together with four of his road trip team including Adam Unger and William Seth, he will do just that with 50 talks in 48 states over 115 days.

The four talks were presented by very different entrepreneurs in the newly set up Seso ad agency space in downtown Los Angeles hidden among some artsy industrial buildings along Santa Fe. The meeting space was so new, in fact the ad agency had just opened their doors the same day as the event was held. One of the presenters, Marc Mertens, was in fact the CEO of Seso, and he centered his talk around a big pivotal shift the agency made in the type of clients Seso represents. Seso wanted to stop selling brands for the sake of selling and took a risk to transition his agency into focusing on clients that represented education, arts and culture, science and health. Of course, his business grew when he followed his passion with a client roster that now includes LACMA, TED-Ed and The Smithsonian Tropical Research Institute.

In contrast, the other talks had a very different and diverse business models. Charlie Capen had a baby and found no information on parenting that appealed to him ­­— so he made his own website/blog with his partner called “HowToBeADad.com” and filled a new niche successfully. Josh Allen Dyksta presented his talk on “The 4 Disciplines of a Healthy Start-up Culture” based upon principles his consulting firm Strengths Doctors has developed. The only female entrepreneur presenter was Shivani Siroya, the CEO and Founder of InVenture.org, which provides simple money management tools, technical assistance and affordable capital to microbusinesses in third world countries who cannot access loans due to their lack of a credit score.

IdeaMensch is on their road tour now. Be sure to look them up, get inspired, attend, or present… or offer resources to other start-up businesses as a way to give back to the community. IdeaMensch is helping ideas come to life, one town at a time. And will surely be in your town soon.