It’s All About Location | Where 2.0 Conference and Wherecamp 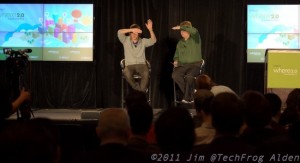 If you use Yelp, Twitter, Foursquare, Gowalla, GPS navigation, movie searches or anything like those on your mobile device, then you use Location based apps. The Where 2.0 conference, and Wherecamp are largely set around location, hence the word Where in the names.

Since the days of Star Trek, it was the dream of many to have portable communicators. In the 90’s, years before the Internet revolution, Motorola offered these communicators with the hugely popular StarTAC line of phones. Though TAC meant Total Area Coverage, the name and design were clearly inspired by the communicators on Star Trek. For a reasonable fee, our hand-held communicator fantasy was handed to us. Of course, all we could really do with these devices was talk.

The Internet came into the lives of consumers in the 90’s, and finally, our personal computers seemed to have a real reason to exist. No longer content with recipes and digital address books, we were now connected to the world with endless amounts of information. Nobody then, could have really predicted the huge shift towards mobile devices, as we know it today.

We’re now a few healthy years into the popular Smartphone era and those early Star-Trek inspired phones are mere relics. Smartphone’s would be nothing without applications, and location based applications are where much of that attention is directed.

Enter the Where 2.0 conference in Santa Clara, California, followed by Wherecamp, just up the road in Palo Alto. Both Where 2.0 2011 and Wherecamp 2011 just happened this past week.

Blogger, author and technology evangelist Robert Scoble gave an on-stage interview to one of the kings of Location, Dennis Crowley of Foursquare. We learned where Foursquare came from, where it’s going, and how people and business are utilizing it. The conference coincided with the news that three-year-old start-up is looking to raise funds at a price that valuates Foursquare at about $500 million. Crowley is no stranger to selling companies and many are curious if he will stick around if someone scoops up Foursquare.

Diann Eisnor of Waze was a very impressive speaker. Eisnor demonstrated how crowdsourcing was so effectively used to gather its immense amounts of mapping data, as well as how companies can cleverly add a gaming element as incentive to users as Waze did to help map lesser used routes.

Our featured video is of Genevieve Bell. She’s an Australian anthropologist and researcher and is the director of Intel’s Interaction and Experience Research.  She gave us a great presentation about context. “Context is everything.” Although she started by telling the audience how she was nervous, she was one of the more poised, eloquent and engaging speakers at the conference. AlwaysOn named Genevieve one of the top 25 women in technology to watch in 2010, and by listening to her keynote, it was clear she earned that title.

DJ Patil, one of the several well credentialed co-founders of Color, spoke about Color. It’s a proximity-based photo sharing and discovery application. Color cleverly uses many of the sensors within Smartphones to not only sense its proximity, but where it is facing in relation to others snapping pictures around you. He explained how location technology can revolutionize how we share all content. At one point, Patil raised his Smartphone to the audience and invited all Color users to take a picture and create a photo event. This is where Color shines. It quickly combined all photos taken to a single usable group we were all able to access. Color raised a staggering $41 million in venture funding. After the keynote, there was a lot of chatter in the hallways and lunch tables about emerging technologies, such as Color, that may invade our personal privacy. In-fact, two days later at WherecampSF, there was a round-table discussion about this very subject. People were so passionate about this subject, that it had to go longer than one session.

Wherecamp-SF unlike Where 2.0, is a fully sponsored event for those that want a more intimate, hands-on discussions about location. Anybody can present a project or idea, and everyone is invited to lend his or her voice and opinion. It was held at Stanford University, only minutes from Where 2.0 in Santa Clara. It immediately followed Where 2.0.

Over two days, Wherecamp dove deep into all the issues and challenges of location, introduced us to new ideas, elaborated on others’ ideas, and more importantly, gave a stage for presenting new companies, or even the idea of a company. Some say Wherecamp is the highlight of their year. I personally found Wherecamp very stimulating. People were challenging each other, playing devils advocate, and simply lending ideas and a new voice to anything presented. About six rooms were designated for discussion including an outside area. There was a whiteboard with times and rooms where people can tape up an invitation to their session. The sharp minds surrounding this event, combined with the full interaction format made for a very enjoyable two days. The fully sponsored food was excellent, thanks to Bing.

If anyone is ever interested in where the tide of mobile technology is moving, Where 2.0 will show you what is happening. If the interest is more at the grounded and interactive level, Wherecamp is a must. If you are in, or interesting in being in the location space, I urge you to prepare for both events in 2012. Not even Star Trek could envision all the things we are doing with our communicator/Smartphones, and location based apps top the list of what the future holds.

Jim Alden is a technology specialist who previously worked many years in IT. He was one of the early programmers in very early touch interface devices before they were popular or easily accessible. He has been considered the Tech Guy To The Stars, as many of his long-time accounts are in "the Industry." He moonlights as a hired editor and has been heavily involved with social media and the online tech community as well. His passion for all things tech related drew him into the many major events and social meetups that take place around Los Angeles, and the rest of the country.