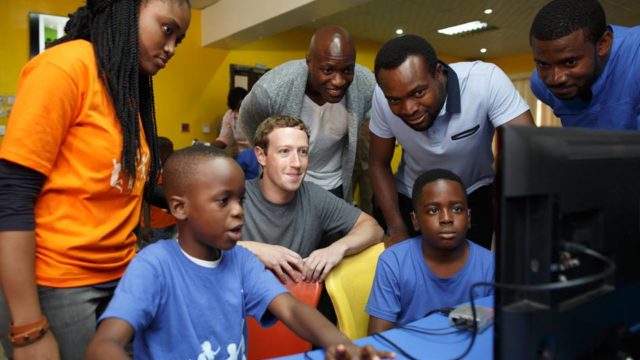 Mark Zuckerberg made an unannounced visit to Lagos, Nigeria last week on Tuesday, August 30, 2016. His arrival was a much appreciated surprise to the tech leaders in the booming African country as it is still in its early yet thriving stages of creating a successful tech and entrepreneurial hub.

His first visit was at Creation Hub (Cchub) innovation center in Lagos where he engaged with kids at a summer coding camp as well as other entrepreneurs visiting the center to build and launch their apps. He then made an appearance at Andela, a software developer accelerator, which the Chan Zuckerberg Initiative invested $24million in earlier this year.

As many people were curious of the intention of his visit, Zuckerberg says on a FB post, “I’ll be meeting with developers and entrepreneurs, and learning about the startup ecosystem in Nigeria. The energy here is amazing and I’m excited to learn as much as I can.”

For many entrepreneurs and investors, Nigeria’s thriving market has been overlooked. Having one of the wealthiest and most influential man in the world like Zuckerberg make a stop certainly will get more eyes and hopefully more money invested in Nigerian startups. According to figures on their network, Nigeria is the largest market in Africa for Facebook, boasting 16 million Nigerians using the platform monthly, with 7 million logging onto the site daily and 97% of them on mobile.

Zuckerberg seemed to have a genuine interest in hearing about challenges to the local startup economy. From a distrust of investors to invest money because of many scams coming out of Nigeria commonly known as 419 scams, to the failed government infrastructure in sustaining an entrepreneurial ecosystem, to the frustrating energy problems and unreliable internet connections, Nigerian citizens in the tech space let their voices be heard at a town hall meeting held by Zuckerberg.

According to Nigerian Tech Entrepreneur, Victor Asemota, billionaire Mark Zuckerberg’s visit to Nigeria was not just a validation but a signal. “The signal that we have the opportunity to do things very differently because we now have a clean slate.”

Asemota continues, “Ecosystems succeed when players see themselves as support for one another. It is interesting that the most popular payments gateway with most Nigerian start-ups is named — PayStack!Silicon Valley has already started to look towards Africa; they have begun investing in our local start-ups. Some Nigerian start-ups (PayStack and Flutterwave included) are now part of the main valley accelerators. Mark Zuckerberg himself invested a whopping $24 million dollars in one Yaba based start-up named Andela. If such validation does not jump-start an ecosystem, nothing else will. From the 80s till now, Yaba [Nigeria] has always been right. Zuckerberg just came to confirm that for himself.”