Are Smartwatches The New Fashion Statement? 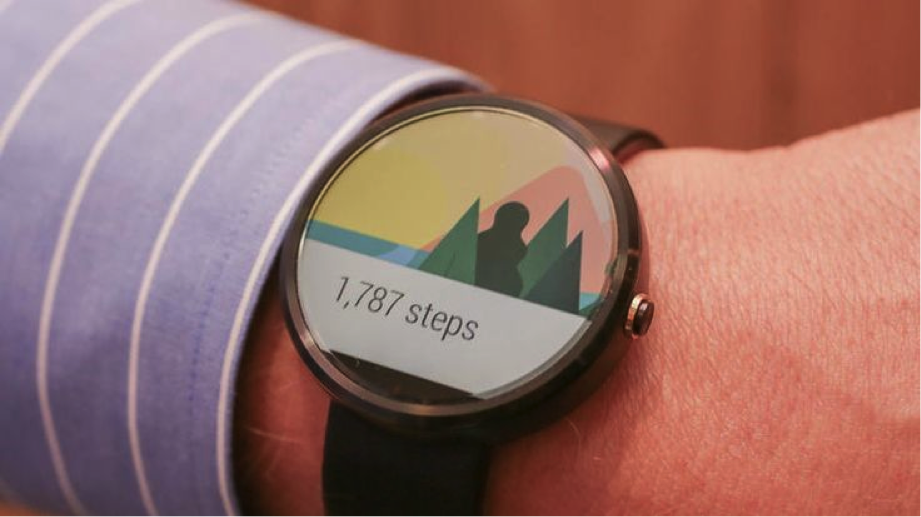 Name it, and it’s all over the headlines these days. In the tech world, the hype is on these wearable tech timepieces that function more than just telling the time. Think of having a condensed smartphone right on your wrist, having additional functions such as being able to provide weather information, messaging notifications, and other key functionalities that are unique to each brands. And these wearables are here to stay, as the International Data Corporation (IDC) reveals a study that 19.2 million wearables are expected to be shipped worldwide this year, with a rate tripling more than last year’s sales. And it is estimated to grow higher in numbers, hitting 112 million being sold by 2018.

With all the buzz concerning these smartwatches, one might think about the future of wearables and where it is heading. How will it fare against smartphones and tablets, since we’re mostly accustomed to these gadgets? Will we join the bandwagon and just buy these wearables to be “in” when it comes to the latest in the tech world? What’s in it that people are totally interested in these timepieces? Somehow, tech experts and a group of people have found a niche where the smartwatch may find its home—in the world of fashion.

This September has been a whirlwind of events not just in the world of technology, but also in the fashion runway. The New York Fashion Week (NYFW) this year still glimmered as usual, with its latest fashion trends, but this time it has an added spark that most people are itching to know more—the arrival of smartwatches on the runway. Its presence somehow merged two worlds, fashion and technology, which are seen before as contrasting to each other. With the inclusion of smartwatches in the trendy world of fashion, they say that the fashion of technology has indeed arrived 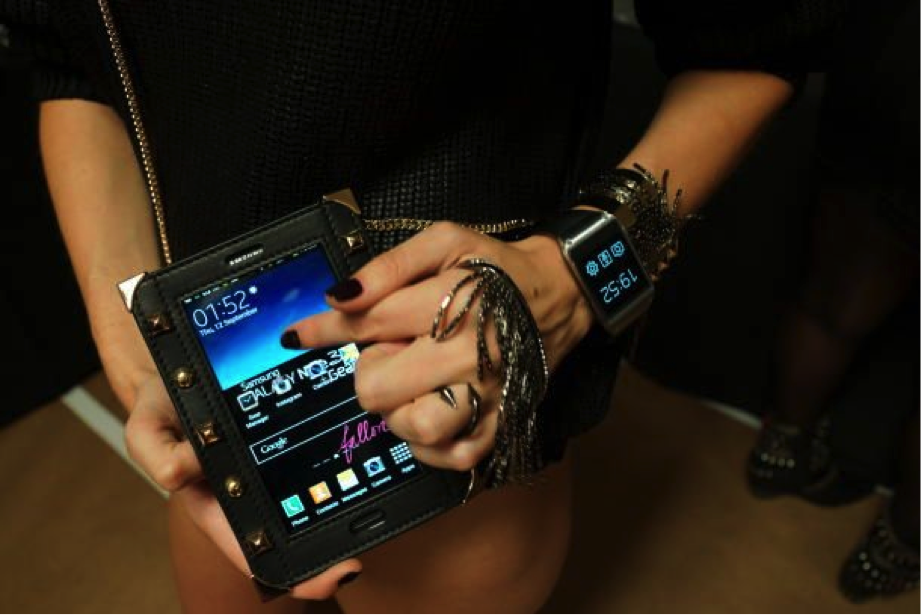 The NYFW has seen several brands and leading designers collaborating on creating these wearable smartwatch accessories that definitely stood out and hit the catwalk. “Smartwatch as the new fashion statement” seems to be in the minds of designers, audience, and the tech experts. Fallon jewelry designer Dana Lorenz partnered with Samsung to create stud charms for the Galaxy Gear Smartwatch, and even created trendy and hip carrying cases for the Samsung Galaxy Note 3. Lorenz, for a glam-punk style, has put metallic jewelry and clunky cuffs beside the Galaxy Gear to make it more fashionable. The runway show of Lorenz also showed a video footage and a tableau sequence of models that enabled viewers to have a closer look at the jewelry and wearable devices.

Rebecca Minkoff also introduced a jewelry line during the fashion week that aims to provide a solution, alongside the design aesthetics of fashion. She created a gold chain-link studded bracelet that has a Bluetooth pairing which enables the user to receive call and text notifications. If you’re worried about your mobile phone running out of battery every time you’re outside, Minkoff has a leather bracelet for you that also functions as a USB cable to charge your mobile phone. Minkoff’s line is expected to be launched during the Holiday season and these are priced at $120 and $60, respectively.

And of course, the launch of iWatch is something that you should pay attention to. It did not make an appearance during the NYFW, but its timing is near the week-long fashion events, to create its own buzz when it comes to smartwatches. Last September 9, Apple launched the iWatch, which is a new addition to its line-up of tech products, but this time it focuses on the wearable features and its overall design. 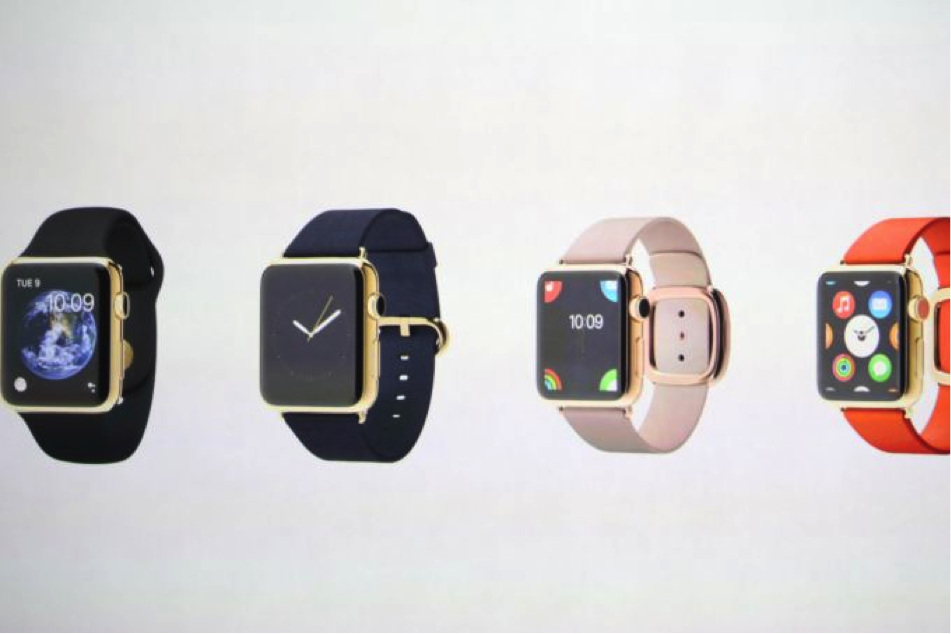 Leonid Bershidswky’s Bloomberg opinion states that Apple has “established itself as the world’s biggest fashion company by releasing a smartwatch that is more about beauty and variety than about technology.” Bershidswky even points out that Apple’s smartwatch, with its squarish shape, can be instantly recognized as a watch which helps it avoid the possibility of the wearable device to be “geeky-looking”. The functionality is simple, being a fitness tracker that measures heart rates and counts steps, but it also handles messaging just like its competitors. Martina Soskova, a designer from Guide London, emphasizes that Apple’s design “could pass for regular watches”, and designers must be able to look into this matter all the time for them to catch people’s attention and make them consider having a smartwatch of their own.

The look itself made Apple the only brand to respond to fashion concerns regarding smartwatches. The concern is directed to designers and tech companies who still miss the mark when it comes to combining beauty and function for watches, as pointed out by Karinna Nobbs, senior lecturer of fashion brand strategy at the London College of Fashion. She says that the design should fit, while the technology should be adding value to the product so that the wearable can be widely accepted and it should deviate from just being a product full of gimmicks.

The Other Side Of The Smartwatch

It’s also high time for all of us to look at the other side of the coin when it comes to smartwatches. They can be hip, fab, and cool with these functionalities that can be the next big thing in your fashion collection but it’s not limited to that alone.

As the wearable technology has combined with fashion, tech experts have been waiting for a “killer app” for watches that is just uniquely made for watches, and could possibly be distinguished from the usual smartphone apps. Some brands have a weak value proposition, since having a device that just notifies you all the time instead of taking your phone out may just make the smartwatch a simple accessory. Also, some features from other brands are too much, while some offer little functions aside from telling the time. Plus, the obvious ones are the early designs for smartwatches which are off in a way. Tech companies may have forgotten the idea that you should be proud of the watch what you’re wearing on your wrist.

And we should not put aside the good and/or bad publicity that smartwatch brands should be taking care of. In this age of the internet and various technological advancements, good and even bad publicity sticks a little bit longer because of the nature of the internet. A single post, click, and share can spell the difference between destroying and building the reputation of smartwatches.

Last September 9, just as Apple announced the iWatch and its new line-up of iPhones, Samsung posted a Twitter graphic which features a quote from Steve Jobs: “No one is going to buy a big phone”. It also comes with a striking line below, “Guess who surprised themselves and changed their minds.” Samsung did not stop by releasing a series of 6 video ads which highlights its Galaxy Note 4 and the Galaxy Gear S smartwatch as the “next big thing”. With these kinds of advertisements, it is important for every brand that offers smartwatch to take care of their publicity and bank on what their offering is, in order to attract loyal customers.

As the fashion industry took a new level by incorporating smartwatches in its fashion line-up, it clearly shows that the tech and fashion industry has cooperated well in order to push these timepieces to its market. Aside from just being an accessory of having the smartwatch to gain attention, designers must work hand-in-hand with these tech giants in order to serve unique functions, while offering appealing designs to attract buyers in purchasing these smartwatches. Without this balance, it might be hard for all of us to think that smartwatches are not smartphones, and it may give us a hard time accepting these kinds of wearables. But for now, we’re happy to see that the fashion and tech industry has been united, thanks to the functions, design, and power of the smartwatch.