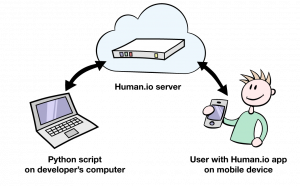 Tasty Labs say their goal is to try and put “the useful back into social software” and they may be inching close to fulfilling it with their latest project, Human.io launched Friday.

Human.io is a mobile application creation utility with free code and API open for developers to create ‘micro-apps’ that can engage an applications audience.

According to Tasty Labs, Human.io will help clients send their user’s real-world data-collection expeditions, prototype a mobile idea or companion app for a website.

Human.io will also allow users to carry out product or service surveys by engaging customers. Tasty Labs says you can also collect wait times for restaurants from users who happen to be eating or get your fans to share photos of how they use a product.

Turn your Passive Audience into an Army of Participants

According to Joshua Schachter on his blog, Human.io provides a simple way to allow a publisher to turn a passive audience into a mobile army of participants. This allows publishers to easily create missions and activities to get people involved more directly than just reading stuff on a screen.

He says, “Human.io lends itself to small, simple tasks: Vote on an item, take a picture of a storefront, etc. It allows you to script with humans as easily as you would script with software. It also offers easy access to the sensors on the phone: GPS, camera, and so on.”

Schachter adds that Human.io’s architecture is like Twilio’s. It allows developers to send UI widgets to their clients, receive HTTP callbacks when their users perform actions, and then respond with more UI widgets.

Human.io will help developers to quickly write and deploy lightweight mobile applications, with access to camera, geolocation, and more.  The developers decide what to see and run their app, based on location, demographics, or your own custom filters.

Human.io will also help firms improve their client relations as it makes the interaction easy and fun through the human.io iOS and Android app.

Schachter writes, “The API talks to the central human.io server, which sends your task to the best end-users based on your matching criteria. The end-users (the humans in human.io) use our iOS and Android app to join your activities, and interact with code on your server.”

Checkout the Photo Scavenger Hunt as a demo of the product.