Aaron Swartz | A Stranger in a Strange Land

A young visionary with old wisdom whose success is a direct reflection of his intense focus and ability to wholeheartedly overcome challenges from the genuine intention of doing good, Aaron Swartz will forever be remembered as a modern day vigilante leading the battle against the injustice of the government suppressing our rightful freedom of knowledge. This article is not just another report on the case of Aaron Swartz but serves to be a tribute to the life and awe inspiring personality of a complicated, principled, and brilliant man.

Swartz belonged to a rare breed of people, those who have a pure heart and focused mind whose intensity and high intelligence disconnected them from the world they served to protect. As he was fighting inequality, hoping to give everyone from every social status equal access to information, he was also fighting an ongoing battle internally with feelings of isolation and depression. According to his uncle, Michael Wolf, Swartz was a young man who viewed the world differently. The skilled developer “had a certain logic in his brain and the world didn’t necessarily fit in with that logic and that was sometimes difficult.”

At a young age, it became apparent that Swartz was a curious person thirsty for knowledge, a thirst that led him to create new technologies to make information easily attainable to other curious minds. At 12, Swartz created an online encyclopedia that anyone could edit. At 14, he became a co-editor for the spec responsible for RSS technology. At 19, he cofounded and launched the highly popular website, Reddit. Susan Crawford, former technology adviser in the Obama administration explains Swartz as building “surprising new things that changed the flow of information around the world.” She describes him as a “complicated prodigy” and said “graybeards approached him with awe.”

Swartz knew that creating useful programs to better educate people would not suffice if there were laws preventing us to freely access information. As Swartz became aware of the detrimental power and control the government can have on this planet’s most valuable asset, the human brain, this talented developer and entrepreneur did not hesitate to take on yet another role- as a political and internet activist.

Swartz’s activism was fueled by his belief that freedom of knowledge gives power to the people. As such, he believed that by openly sharing and distributing years of research and literary work to the public in pursuit of spreading information, would result in a more equal and just world.He started working on improving US politics joining Lawrence Lessig’s group Change Congress in its efforts to get the US Congress to pass a bill that would make it mandatory for every major political candidate to have an equal amount of funds for their campaign. He then founded Watchdog.net, a website built on providing transparency in the political realm by allowing voters to research on various political data. His goal was for voters to seek answers themselves without the influence of the biased media and discover patterns and corruption.

Finally, Swartz founded Demand Progress, a group focused on advocating civil liberties and government reform. This group was responsible in leading the successful campaign against Stop Online Piracy Act (SOPA), a bill introduced in the US House of Rep in 2011, which was created to restrict access to websites that illegally shared copyrighted property. With Swartz’s influence, the bill was withdrawn after widespread protests. 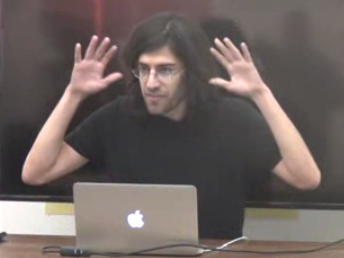 Swartz’s continuous effort for the progressive and open-information movement is what eventually led to his demise. As he was determined to push the envelope further, making web files free and open to the public, he quickly found himself slapped with an unscrupulous lawsuit. In 2011, Swartz was indicted on federal charges of illegally downloading over 4.8 million articles and documents from JSTOR (Journal Storage), a subscription-only service that distributes scientific and literary journals. He allegedly broke into M.I.T.’s computer networks, hiding a laptop under a box in a utility closet to use the servers to gain access to JSTOR. Swartz faced as many as 35 years in prison and over $1 million in fines.

A close friend, Quinn Norton, says that Swartz did not want to talk much at all about his impending trial. But when he did it, it was obvious that it “pushed him to exhaustion and beyond.” Close friends and family considered Swartz to be “tough and delicate.” Though loneliness and isolation was a companion that troubled him, he was still hopeful, “at least about the world.”

On January 11, 2013, Swartz committed suicide and was found hung in his Brooklyn home. Swartz’s family has gone public in blaming the federal prosecutors that pursued his case for the emotional turmoil leading to his death. “Aaron’s death is not simply a personal tragedy. It is the product of a criminal justice system rife with intimidation and prosecutorial overreach. The US Attorney’s office pursued an exceptionally harsh array of charges, carrying potentially over 30 years in prison, to punish an alleged crime that had no victims.”

Swartz had been open in sharing his battle with depression, often writing his thoughts regarding suicide on his blog. Even without the stresses of the trials, he often felt isolated and different from most people. Swartz’s experience in attempts to communicate with the outside world is best described as the black box syndrome, often feeling misunderstood. According to Swartz, “There are some people you talk to and you just feel like you’re banging your head against the wall. You can’t understand what they’re saying, they can’t understand what you’re saying, you’re completely out of rhythm and unconnected and you just stand there waiting for a chance to sneak away without making things even more awkward.” Though the impending lawsuits itself were not direct cause of his depression, it may have just pushed him to taking his own life.

Anytime a sudden death of a young hero has occurred, humanity is determined to make a lesson of the tragedy to both comfort the outpour of our sadness and continue the fight for their battle, making them a legacy. Writers, reporters, colleagues, family and close friends have given lessons and sound advice to what we should do to honor Swartz’s death– be inspired, pursue the fight for free information, fight to make the world a better place. Edward Tufte said that Swartz was “marvelously and vigorously different” and that there is a scarcity of that in today’s world. He suggested that, “We can all be a little more different too.”

To make a big impact on the world we want to change, we must work on the only thing we have full control of, ourselves. As such, I’d like to instead get a lesson from the words of Aaron, himself: “Look at yourself objectively.” In an ironic post on Swartz’s personal blog, he tells the story of Ignaz Semmelweis, a Hungarian physician responsible for early antiseptic procedures. In 1847, after discovering and reporting that the clinic he worked for was responsible for killing new mothers and finding the solution to prevent the deaths, Semmelweis was ridiculed and attacked, fired from the hospital and forced out of Vienna. Semmelweis got depressed, turned to alcohol and his behavior became erratic. In 1865, he was committed to a mental institution, being beaten by guards, placed in a straitjacket and locked in a dark cell. He died shortly after at the age of 47, from an infected wound.

Swartz explained the repercussions of not looking at one’s self objectively. Had the doctors not been so stubborn to accept their faults, being responsible for the deaths of thousands of patients, more lives would have been saved and Semmelweis would have lived and have more opportunities to make more discoveries to change the world for the better.  Swartz stated, “In moments of great emotional stress, we revert to our worst habits: we dig in and fight harder. The real trick is not to get better at fighting — it’s to get better at stopping ourselves: at taking a deep breath, calming down, and letting our better natures take over from our worst instincts.”

The similarity of this story with Swartz’s life is uncanny. What if the prosecutors and those ready to attack Swartz’s character looked at themselves objectively? What if they stopped for a moment and asked themselves if their actions and words were benefiting the planet or in fact oppressing freedom? Let Swartz’s own thoughts be a lesson to his tragic death, not just to the prosecutors and the many other people involved in his last days, but to all of us. Let us remind ourselves to take a moment and look at our actions and intentions objectively.

Indeed, this young man felt as if he were a stranger in a strange land but despite this disconnect, his brilliant mind, righteous heart and sensitive soul has touched countless of lives in the most positive way. Aaron Swartz, the selfless hero who forged ahead, despite the risks of persecution and chose not the luxurious life  of a young wealthy entrepreneur but rather the life of an activist who fought selflessly, with conviction and purpose for a noble cause will certainly be missed by the alien and foreign world he lived to protect. May his gentle spirit rest in peace and finally feel at home.