Changing the Face of Digital Signage: Nanxi Liu of Enplug

“We want to innovate the digital ad space in a whole new way.”

Enplug is a fast-growing, ubiquitous Silicon Beach company. You might be aware of their products – perhaps having seen their digital media signs in your favorite local restaurant or bar, but what you might not know is their compelling founders’ story and unique company culture.

They hold a strong presence in Southern California, with locations in 30 cities. Their unique “provide value to customers first” mantra sets them apart in the digital signage industry. They’re a young upstart company who’s looking to change how we interact with digital signage and we’re thrilled to share their story with you. 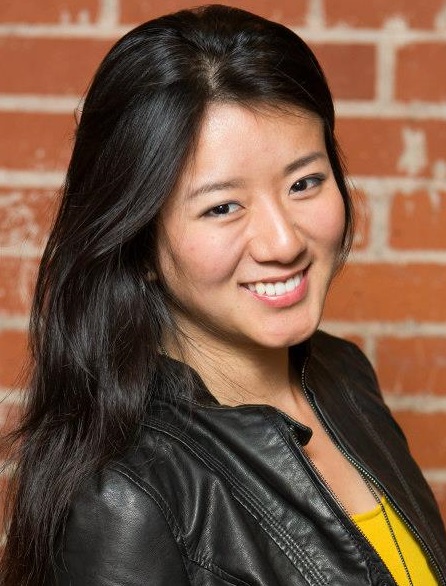 Meet Nanxi Liu, CEO and a cofounder of Enplug.

We discuss the serendipitous circumstances that brought the founding team together (one of the most unique founder stories I’ve heard to date) and move to topics surrounding the future of digital advertising. For more information about Enplug, visit their homepage and Crunchbase profile.

My favorite part of the interview with Nanxi starts right off the bat as she recalls the string of fortuitous events that brought the founding team together.  All members were added in quick, successive 24-hour timespans and years later, they’re still going strong.

Through our conversation, we’re offered glimpses behind the lessons the Enplug team has learned along the way.

Nanxi discusses her multi-discipline background at Berkeley as a student in business, political economy, and engineering. Her career path was pointing her toward a future in Biotech (she’d also cofounded a biotech company around the time), but one simple introduction recharted her course completely.

In Spring of 2012, a former colleague at Goldman Sachs suggested she connect with David Zhu, an entrepreneur with an eccentric but compelling background (professional poker player, dropped out of MIT). He flew from LA to discuss his business concept with Nanxi, and after a dense hour-long discussion, she signed up immediately and made plans to visit LA the following week.

The story continues with the team’s third, another serendipitous encounter with Zach Spitulski. An inadvertant bump led on the crowded Southwest flight prompted a conversation between Spitulski and Zhu, and by flight’s end, Zach had agreed to leave UCLA to join the startup. (He’d just finished his third year and had built his own top-performing apps.)

The remaining members came as personal referrals – Alex Ross, Zach’s roommate (also a programmer) signed up a day later to become their lead developer. Like Zach, he left UCLA to jump in with both feet. The final puzzle piece (more like an original) was Navdeep Reddy, classmate of David’s and the one who originally conceptualized Enplug with him. 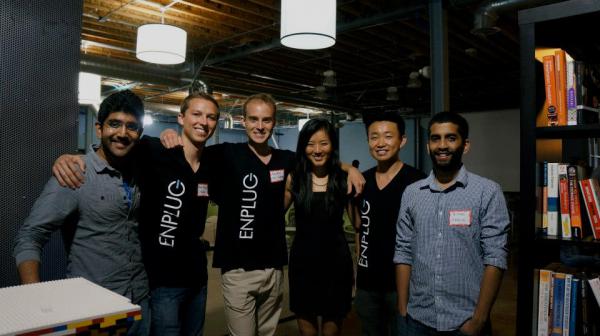 Jump In with Both Feet

The team had the profile of an unbelievable startup story, with three college dropouts and a very early-stage idea that couldn’t have predicted where they’ve ended up today. Nanxi recalls the “early” days:

“We made a significant decision to all move into a tiny 1 Bed/1 Bath place in Koreatown. We upgraded eventually, but we learned early on the impact of working and living with co-founders. You get to learn each other very quickly.

“The getting to know you stage went by in a blink. Everyone had a mutual respect for each other and saw that we had compelling pasts – building former businesses, working with each other. We didn’t need to question each others’ abilities.”

By doing this, the company culture was set from day one. They lived/worked closely and established an unconventional family view of how they operated. Eventually, the team moved into a house (which at one point supported a crew of 20 people) and are presently in an office space in Culver City.

The founding team built their culture around the golden rule of “what would we want?” In addition, they kept in mind the needs of employee #1 would invariably be different than #20. Basic startup perks were a given, but with a familial touch: fully stocked groceries so teammates never worried about meals, and catering options 1-2x a week.

Weekly Idea Jams were (and still are) a major part of how decisions are made, and employees are always empowered to take on additional roles outside job titles (ex: looking over recycling efforts as sustainability chair).

*Later on, we’ll see how these concepts permeate into their business model.*

Just Get Started and Refine Over Time

We move the discussion over to early product days. Nanxi explains their MVP’s with a refined product/model over time.

“Our initial ideas looked nothing like what we’re working with now. The first product idea was putting tablets on the backs of doors in restrooms *chuckles*. We even thought about putting them in individual stalls and performed some test cases. Eventually we moved on to tablets next to checkout stations.

We started small, but wanted more innovation. We pushed to find out how we could add value to the business/cafe/bar owners who we consider our customers and stakeholders.”

Focus on Value, Not Advertising

Nanxi had no idea what to expect, going from Biotech to David’s world of digital signage:

“We were able to provide an innovative service by focusing on helping businesses increase value to their customers. To start, we offered free signage installs to lower their risk, then focused on delivering service to prove we could add worth to their venue.

Our goal was to provide the benefits of increased sales and client retention, all with the best customer service experience. We treated them better than family, bought them ice cream, did anything to make them happy.”

It’s a very different perspective on digital signage. Instead of advertising, their large, colorful screens are a direct result of these core values. It appears Enplug has found success by mixing highly visible physical products with a focus on two-way communication and live content.

(By the way) They also send professional photographers food and products for their venues, then design these bits of media into collages for their clients’ screens. All inclusive. 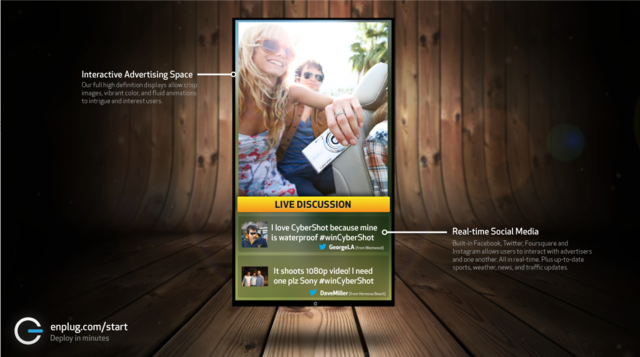 Today, Enplug’s added ecosystem is building into their repertoire. Their hardware focused model is still in place, as screens are included in the subscription service, but as Nanxi reports, what’s in store next is the most exciting.

“We’ve built an app framework. Think a digital billboard ecosystem where third parties can create apps for our network. With apps like the social media feed (which draws data from Twitter, Foursquare, etc.) and a beautiful Instagram wall in place, we’re also in the process of adding new ones.”

Active expansion is in the cards for Enplug’s team. Present day, they service venues in 30 cities throughout Southern California, Phoenix, and Chicago, with offices in Los Angeles and London. This year, they plan to move into key metropolitan cities like San Francisco and New York City, aiming to be ubiquitous in as many high foot traffic areas as possible.

Know When to Say No

While Enplug has found rapid success, Nanxi grounds us and gives a fair reminder that the golden road is still laid brick by brick.

“One of the challenges Enplug met early on was deciding whether to take on someone who was qualified, but was also very expensive. We had an engineering candidate in the first few months of starting our company whom fit what we were looking for from a skills perspective. He was asking for a $120K salary. We asked if he was willing to take a pay cut for more equity. He said no. We ultimately decided not to hire him.

Shortly after, we met two engineers who were much more skilled and were willing to take a salary cut for more equity. They’re now our VP of Engineering and Chief Software Architect and absolutely instrumental to our team. One of the best decisions we could have made early on was to stay scrappy and be very selective about who we wanted to bring on our team. We learned that one of the best qualities to look for in any candidate that we interview is someone who values our equity/long term value over short-term benefits like salary.”

The lesson carries over to the product side as Nanxi enumerates on the challenges of saying no to clients who weren’t a good fit.

“Overall, we don’t talk to venues unless we feel like their store or restaurant would benefit from Enplug. We’ve had to turn customers down before since ultimately, we’re focused on providing value to these venues.” 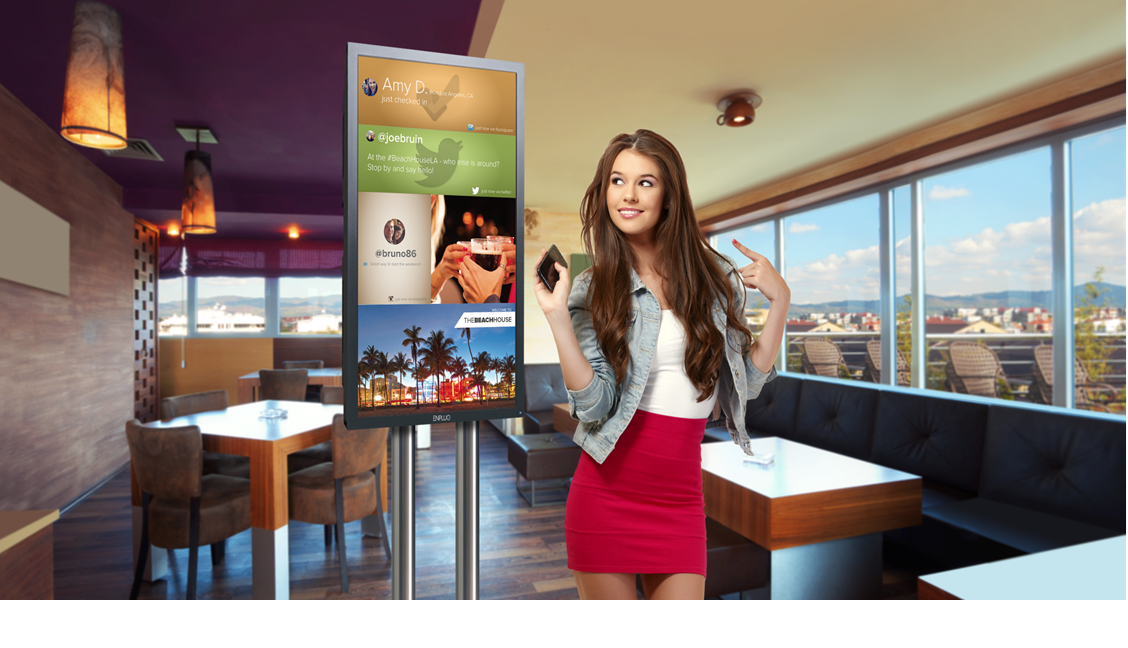 Our discussion takes a turn into future talk with the mention of wearbles and augmented reality. Does Enplug see a day where they could occupy the metadata space as well?

“We think most people in our industry would feel threatened by new technologies – but we get excited for it. Because we’re now focusing on building a framework, it allows ut to be flexible. The possibilities behind innovating with wearables is extremely exciting.”

With that, we conclude our conversation with Nanxi. All the best for their ongoing success. We’ll definitely check back to learn more!