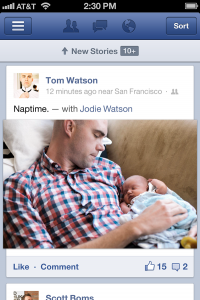 Facebook has done away with the old slow HTML 5 iOS app, introducing a new app which the Facebook says is twice as fast to the glory of  its users on iPhone and iPad.

According to Mark Zuckerberg, Founder and CEO on his Facebook wall he says, “We just released a new Facebook app for iPhone and iPad and it’s a lot faster. Our team completely rewrote it from the ground up to focus on speed. It’s a big step forward.”

The new app written in native code and twice as fast the old one is now available on the App Store with a four star rating already with just a day after its launch. The HTML 5 had a two star rating and was not as popular with its users.

Confirming this Mick Johnson Facebook’s iOS product manager  in a post the update to the Facebook app for iPhone and iPad will make keeping up with friends faster and easier.

He says the Facebook 5.0 for iOS is twice as fast as the previous version when launching the app, scrolling through news feed and opening photos in feed.

Johnson adds, “We’ve rebuilt the app from the ground up, so now the app opens much faster and your news feed and notifications load right when you open Facebook.”

Due to the update, the news feed stories appear faster too and you are notified when new stories come in and they too can be tapped to immediately see the latest updates.

Johnson also adds that the photo sharing has also become first and opens on click  and also closes on single swipe.