Game of Drones: Behind the Effort to Forge a New E-Commerce Frontier 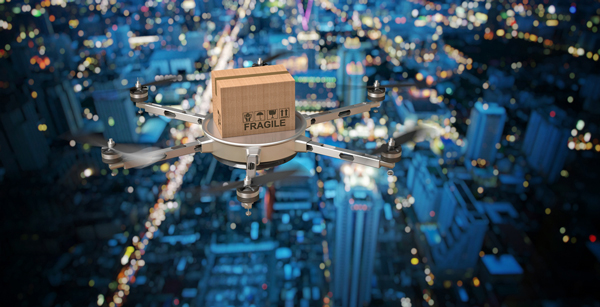 After conducting indoor tests for several months, Walmart recently asked U.S. regulators if it could test drones (a.k.a. “unmanned aircraft systems” or UAS) for home delivery, curbside pickup and checking warehouse inventories. The news came as no surprise to anyone. Walmart’s been investing heavily in its e-commerce capabilities — too heavily for some investors’ tastes, in fact — in an effort to make up ground on Amazon and Google, both of which are already deep into the drone development process.

Just a couple years ago, when Amazon CEO Jeff Bezos told 60 Minutes about his plan to use drones for deliveries, it seemed like a crazy idea. The fact that Walmart is now looking to launch its own fleet is an indication of how quickly the idea caught on — and how valuable drones could be as an optimization tool. As e-commerce continues to mushroom, stores of every size will need to find new ways to attract and satisfy shoppers while differentiating themselves from competitors, and quick, easy delivery system would certainly do that.

Most online retailers deal with razor-thin margins, so increased volume is the best way to boost their bottom lines. Amazon has long embraced that reality, trading potential short-term profits for surer long-term gains and growing instead through a series of data-driven steps designed to continually expand its products and services, its marketplace, and its audience. The resulting sales volume and cash flow have allowed Amazon to fund a variety of initiatives, including a drone delivery service that should help Amazon attract and retain even more customers, and thereby continue growing. Walmart has similar deep pockets and clearly recognizes the need to enhance its e-commerce offerings — and the opportunities that doing so will create.

Then again, any retailer with the means, proper product lines, and engaged audience could benefit from the advent of drones. As the technology advances and production costs drop, UAS should open a new frontier for e-commerce. Significant improvements in distribution capabilities, from the Pony Express to the First Transcontinental Railroad to FedEx overnight services, often create a cascade of changes across society, and drones represent another leap forward.

The primary e-commerce change would come in the form of new customer expectations. One of the drawbacks of online shopping is customers typically have to wait at least 24 hours to have their orders — and their wishes — fulfilled. Fortunately for retailers, consumers have accepted these delays amenably. In fact, they’re much more focused on online shipping costs than delivery times. When asked to choose the most important factors in their online purchase decisions and shopping experiences, they consistently cite free shipping rather than expedited or even same-day delivery.

If retailers can reliably and affordably fulfill orders in less than an hour, though, some customers will surely want to get almost every purchase that quickly. Others will welcome the increased flexibility but, depending on the cost, use the service more sparingly. Over time, drone deliveries could become as common a customer expectation (at least in certain zip codes) as two-day shipping, and stores that can’t provide it will lose sales (and customers) to those that can.

There are still a couple of obstacles to overcome. For one thing, as noted above, shoppers must view the drone service as an affordable option. Everyone loves greater convenience, but not everyone wants to pay for it. “Free” already trumps “fast” when it comes to shipping options, and a lot of consumers won’t pay extra fees just to get, say, a set of towels or a book in 30 minutes rather than two to five days. Urgent needs or strong desires, from replacement clothes and medical needs to groceries and take-out dinners, can change their purchase calculations, though. Indeed, Amazon is testing a “bring it to me” function that will pull GPS data from buyers’ smartphones and deliver packages to their homes, businesses, or even boats.

Plus, attitudes differ by age. Millennials (18-24-year-olds) are willing to spend four times more than older shoppers for next-day delivery, which suggests that they’d be willing to spend more for even faster delivery. They’re also the current shoppers with the longest lifetimes ahead, and they and future consumers will grow up accustomed to drone deliveries, mobile shopping, and other retail influences that didn’t exist even ten years ago. They may come to appreciate the savings that waiting can bring, but purchase habits vary from generation to generation.

Another obstacle is the reliability and safety of drone deliveries, from the viewpoint of retailers, shoppers, and federal, state, and local governments. Current and future testing will eliminate process glitches, and retailers and regulators will do everything in their power to remove potential risks to citizens and property. The Federal Aviation Administration (FAA) has established baseline rules for current UAS operators, and it will issue rules for commercial drones by June 2016. However, it’s unclear whether and to what degree state and local entities can further restrict their use. Retailers will also have to navigate additional drone-related hurdles, including weather and insurance concerns, hunter and hacker threats, apartment logistics, and even how wide a region they can profitably service.

By August 2015, over 1,000 companies — mostly farmers, railroads, medical and security firms, and filmmakers — had received FAA exemptions to fly drones commercially. The FAA estimates that up to 7,500 small commercial drones could be in use by 2019. (Since quite a few won’t be owned by retailers, that could put quite a holiday-season strain on those that are.) With UAS investments exceeding $89 billion by 2023, their numbers and use will keep rising. The sky may be quite literally the limit for drone technologies, and one of the next frontiers will certainly be e-commerce deliveries. | Images via Shutterstock