I was introduced to KOR at a few junctions in my life. I’d inadvertently grown fond of a KOR ONE hydration vessel upon discovering it in the communal housewares cupboard.

With little more than a guttural response of “ooh pretty” in neanderthal fashion – I grabbed it and used it for a couple of weeks. I later found the bottle belonged to my roommate (don’t worry, the bottle was still in the communal cupboard and thoroughly cleaned upon return) – he was a graphic & brand designer by trade and had a quirkier appreciation for negative space than most people. But I could see the connection between his background and my personal compulsion to use a product solely on its design factor.

The vessel disappeared (as all communal house-ware items tend to do) and I never thought about it again. Until a few years later.

I was having a casual chat with a another graphic & brand designer (it’s LA, what can you expect), when he prompted an innocuous question. “Do you know about KOR?” I replied no. (Yes I’m aware I used a product for two weeks and didn’t bother getting the name of it). He showed me this video.

“Wow”, I thought. and made the connection. This was the same company, whose product I’d used years before, solely on design aesthetics. Immediately, I decided to give the KOR Nava a shot and cover it on TZ. It’s not hardcore tech, I’ll give you that, but it’s a Kickstarter funded project that shows entrepreneurial drive, an appreciation for design, and an innovative new way to think about the bottled water and filtered water industry.

I say with no qualms that I drink an obscene amount of water. How much exactly? Around 0.5 – 1 gallon a day. It’s a pain but supposedly this is the key to ensuring I’ll look and feel 20 well into my 50’s. My go-to water receptacle’s been the Hydroflask 40 oz wide mouth. It’s heavy, cumbersome, and the plastic loop is infinitely fragile when used to support the heft of a full container. But I love it. The double wall insulation keeps drinks cold/hot for up to 12+ hours, and having a bottle of this size constantly challenges me to drink it. It’s one of those kinds of relationships. 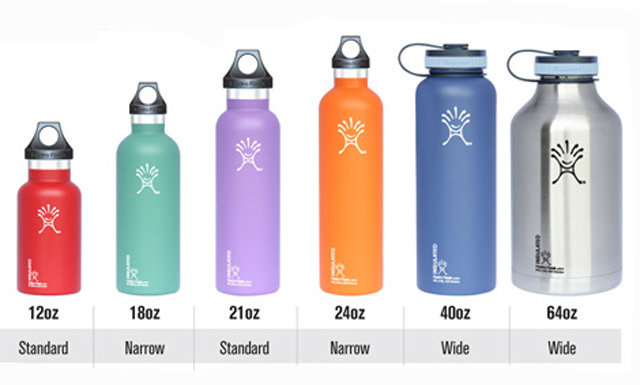 I’d tried other filter+bottle products before (more on that later), so I entered this with an inquisitive mind. Is this bottle everything the KOR founders have promised? Will it solve global warming and save seals from being clubbed? Probably not – but it WILL give you less of an excuse to avoid drinking water. So let’s talk about it bit-by bit with an easy 1-3 system. 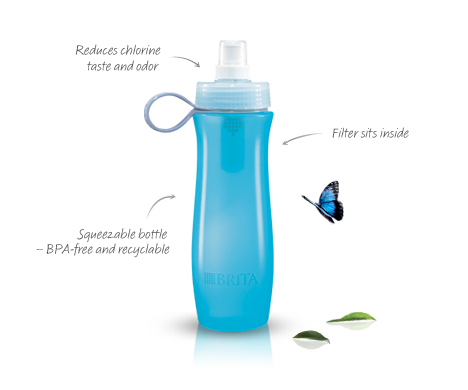 As I’d mentioned earlier, I’ve tried a couple filter+bottle combinations before and as KOR mentioned, it was indeed a frustrating experience. There’s a reason why the Bobble (I think they were the ones to pioneer this) and Brita were soft squeeze bottles. It was so that you could generate enough force to actually get the water out of the receptacle. Agonizing indeed.

I lived with the tiny Brita for a good 3-4 months, and while it promoted better habits to drink more water, I grew tired. Tired of carrying it and a backup canteen just to get enough volume until my next sink trip (like I said, I drink a lot of water). I grew tired of the slight taste of chlorine, and I grew tired of needing to squeeze with the force of Zeus every time I needed a drink. Off to the communal cupboard you go, Brita.

KOR’s turn. Their video claims a patented easy flow system that creates a stream of water through the filter tube. With how they described it, I’d envisioned a free-flow ability strong enough that I could double my KOR Nava as a pinch weapon, in case I ever got into an impromptu water fight. I was sorely mistaken.

Admittedly, drinking isn’t as seamless as I’d imagined, but it’s good for a filter bottle. Their easy flow system is definitely a lot smoother and you don’t need to physically squeeze the bottle (the hard BPA-free plastic won’t allow it anyway) to get any water. The system appears to work like a syringe – the top of the tube’s air pressure holds enough water that a clever bit of osmosis allows a better flow. I give it a 2/3 – It’s good. But perhaps my expectations were unrealistic. 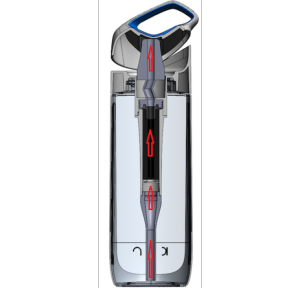 I gave the convenience factor a 2/3. The odd shape of the bottle didn’t allow it to fit into any car cup holders (you end up needing to do that thing where you throw it into the passenger seat or tuck it in that weird space between your car’s center divide and your seat). And I found the top to be tricky when you wanted to flushly secure it. It was easy to screw the top on un-flush and leak water). 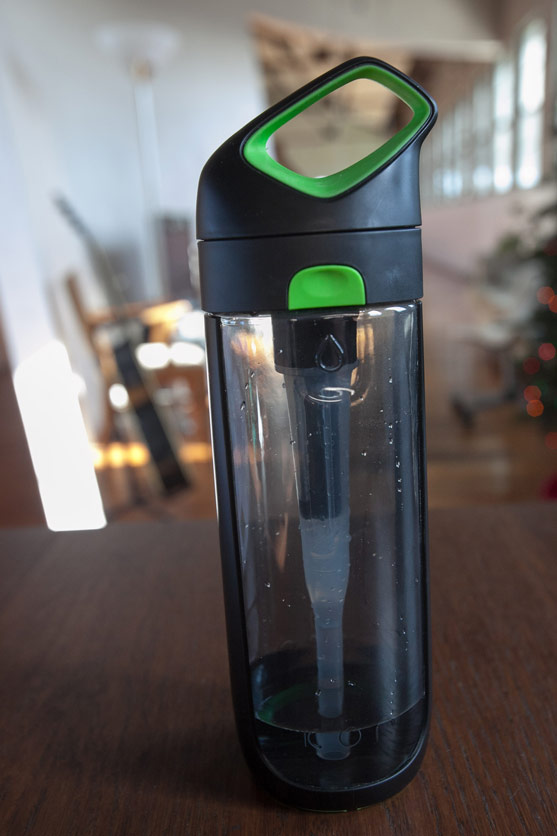 This might be a personal quirk of mine since I, again, drink obscene amounts of water, but I did find the bottle to empty prematurely between stops. But that’s the point of a filter bottle – the world IS your water receptacle.

What I did like? – The quick snap top and the hollowed out holding ring. Though I griped about the size and odd shape, it fit into my bag’s side pockets easily (if anything, the odd shaped help to give it a slimmer profile), and the bottle never felt overly heavy of cumbersome in my hands. 2/3 is still a win. Covering the mouth spout to avoid bacteria contamination bumps the rating to a 3.

No drops yet so I can’t comment on the strength of the plastic. It feels light, but not fragile, and I haven’t had any mechanical issues yet with the snap top (though it does feel like that part could easily break off if it were to fall in the open position).

No mechanical malfunctions to get water – I’ve been able to drink out of the bottle as I’d intended every time, but that should be default. You should be able to drink from your water bottle. Crazy right?

Overall, the filtering mechanism provided great tasting water.  Only a slight hint of {whatever we have in our Los Angeles water} from time to time, but I guarantee, a ton of improvement over the other options I’d had. Chalking this one up to our aggressive LA water.

Here’s where the experience got me. The design is great. Something that you’d imagine Steve Jobs, Elon Musk, or more realistically TONY STARK to have on their desk (see photo below). The shape is fluid but with enough sharp angles to make it interesting. Interesting enough that whenever I pull the bottle, snap the top open, and take a sip, people ask me “wow, what bottle is that?” 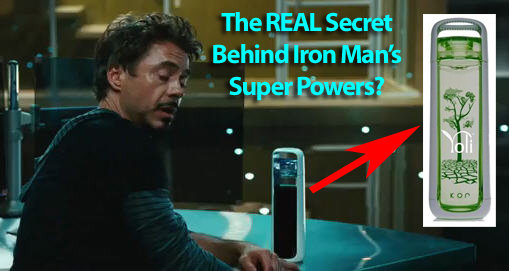 “Oh, it’s no big deal,” I’d answer, “It’s just a water bottle. It’s called the KOR Nava, actually it’s pretty cool – they funded their project with a Kickstarter campaign, and they use an activated carbon filter made from coconuts instead of coal; they’re claiming to change the way we drink water with a filter subscription program. I think they’re the first company doing this.”

And just like that, I’d turned into an affiliate for their product and an evangelist of the anti-plastic bottle movement.

It’s a bit pricier ($30) compared to what I’d think is the next best competitor, the Camelback Groove, which is cheaper  yes, but uses a filter that looks like a more traditional Brita (worth testing in a side-by-side I’m sure), but I’ll be completely candid when I say… I love products with a story. And you get stories when you have conversations.

And that’s really what prompted me to want to cover this product as soon as I saw their Kickstarter video. They have a product, whose design is compelling enough that it drives conversation. And from that conversation, you get glimpses of entrepreneurial creativity, and innovation in a system we’ve known intimately (our environmentally detrimental obsession with bottled water). It’s a system that we honestly can do much to improve the world by changing our practices and products.

Nava replacement filters are priced at $13 for a pack of two and can last months on end. Consider in the time you’ve paid your first $30 for the bottle (comes with one filter), you’ve saved enough costs for 7 crates of bottled water from Costco and 245 actual plastic bottles… which mostly end up in the ocean.

For more about KOR and the Nava subscription program, be sure to visit their website.