Click the link to see the rest of our photos from the LA Auto Show on Facebook!

It’s going to be a HUGE weekend here with the LA Auto Show in town. Expected to be one of the biggest shows yet, the Convention Center will see thousands of gearheads and enthusiasts ready to set their eyes on (and their asses in) the latest developments from Detroit, Japan, and Europe. We got an early peek at the cars earlier this week through the Autoshow’s press days and honestly, it just wasn’t enough time to experience every vehicle on the floor. With 50 new model debuts and hundreds of cars in multiple halls, by day’s end, my clothes were saturated with new car smell (yum) and my aching feet felt like I had done a marathon.

The “green” theme has continued strongly with almost every automaker showing face with hybrid, efficient-diesel, fully electric, or alternative fuel vehicles. Most notable this year was the BMW i3 and i8, with strikingly swoopy curves and dual hybrid systems that employ electric AND diesel driven drive-trains. 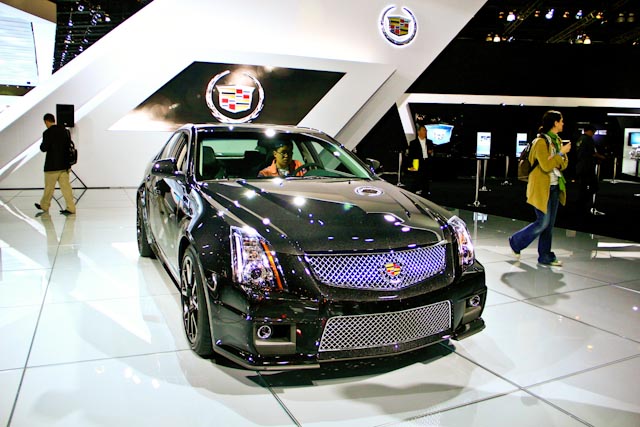 But Cadillac had something a little different up their sleeves this year. Though they did bring the gorgeous CIEL concept to the green party, they had something new nestled amongst their lineup of high performance V-Series (wagon, coupe, and sedan variants with monstrous 500+ hp engines and enough shiny trimmings to burn holes in your retina).

With green friendly and performance savvy bases covered they focused on highlighting something a little different… something to appeal to the hardiest tech-nerd (to be honest, this was exactly why we were there in the first place): The debut of Cadillac’s highly immersive CUE System. The “Consumer User Experience” system, is a robust “infotainment” system that seeks to seamlessly integrate entertainment and driving information, thereby reducing distractions and risks for drivers.

The system does this with employment of touch-based technology borrowed from the very generation of smart phones and tablets that have increased distracted driving habits, raised accident statistics, and prompted new protective legislation. This is true especially for touch-screen devices that require more visual communication to hit the right buttons. CUE’s extremely responsive tactile screen makes use of haptic feedback and touch gestures with pressing, swiping, and pinching to zoom or expand.

Though driving laws have been in place and everyone understands the risks of “iDriving”, people will most likely continue to text and play angry birds on their daily commutes. In the VP of Marketing, Don Butler’s introduction to the Press Days crowd, the automaker has recognized that we are a continuing generation of electronic consumers with no signs of slowing down. With the CUE project, they as a company have decided to embrace that fact and make a better way  for drivers to interface with motor vehicles. 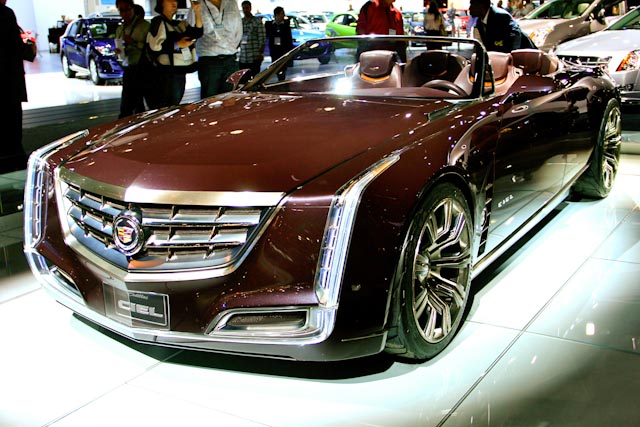 In person, the responsive touch screen and console buttons look very impressive. I’m not sure about every one else, but honestly, most car navigation screens make me want to punch myself in the face. I’d rather use my phone to find directions instead of dealing with horrendous hard-to-press icons or circular dials and menu-scrolling buttons. Both accurate and forgiving, Cadillac’s menu system keeps this in mind, replacing busy menus and complex menus with fewer buttons and larger icons.

Really, the only glaring problem that I could see was a lot of eventual elbow grease to keep those shiny surfaces clean of finger prints (lol). 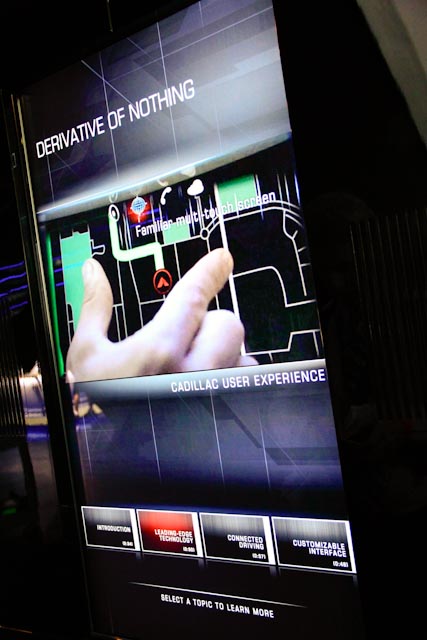 The system is extremely svelte with an integrated 8-inch LCD screen to serve as the core with traditional vehicle cluster replaced with a 12.3 inch LCD. Users can switch between customizable themes (less or more info, driving information only, etc.) to only display what is pertinent. According to Butler’s introduction, the entire development process was coordinated along with Cadillac’s designers and consumer users the whole way; Cadillac teams went along for the ride on lengthy trips with 32 consumer testers over a period of 32 months (awkward trips to the Grand Canyon with your family and two Cadillac techs in labcoats/suits anyone?) The end result, an extremely sharp looking system with aesthetics and ergonomics in mind.

The best little tidbit with the menus and digital dials was that you can take navigation information from the center screen, and swipe it to the gauges while retaining media info on the center screen. Slick. 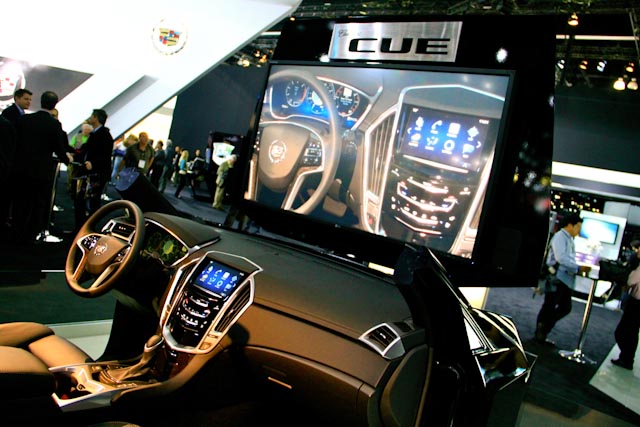 CUE runs on a Linux OS with open source capabilities, which should lead to a more stable product with expansion rooms from third party developers. It also boasts an industry-leading natural speech recognition system with text to speech capabilities. Scenario: Your synced phone receives a text, and the car will read it back to you and provide preset responses, or allow you to respond vocally.

No official word from Cadillac if the system will be compatible with Siri, but they’ve indicated that the system is built flexible and scalable. 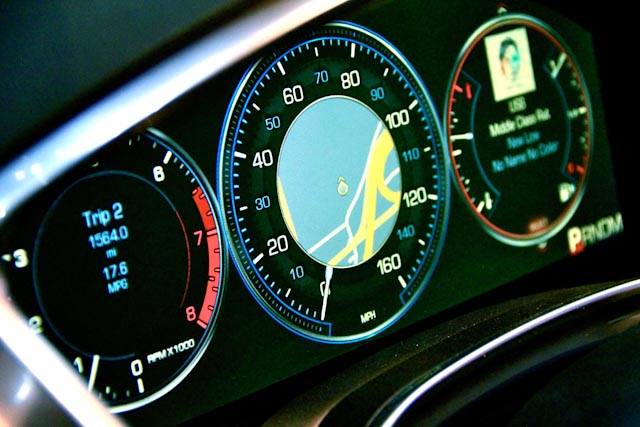 Click the link to see the rest of our photos from the LA Auto Show on Facebook!

Overall, Cadillac seems to have an impressive product offering set to debut in 2013 with their XTS & ATS luxury sedans, and the SRX luxry crossover. We can’t wait to check it out in a production vehicle. One step closer to a minority report gesture-interface world.