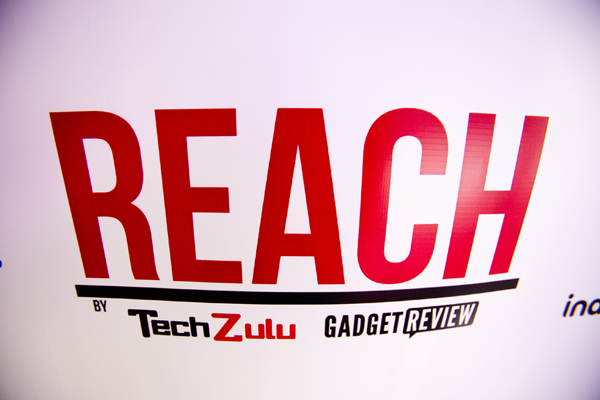 It’s almost been a work week since Techzulu and Gadget Review’s REACH | The Connected Future and we’re still reeling with excitement. First, we’d like to thank our exhibitors, sponsors, and venue (Dave and Buster’s Westchester) for supporting the all-encompasing day of industry insights and networking.

And of course, we’d like to thank our amazing panels of speakers for pouring their knowledge into the mental chalices of our present and virtual attendees.

As one of our most fully stacked events to date, we thought it wouldn’t quite each of our five categories justice by recapping the entire event and skimming only for highlights. We’ll be publishing a series of short and sweet recaps of each of our tracks, providing key points on each of our five industry tracks including: Cleantech, Gaming, Home, Wearables, and Smartphone. 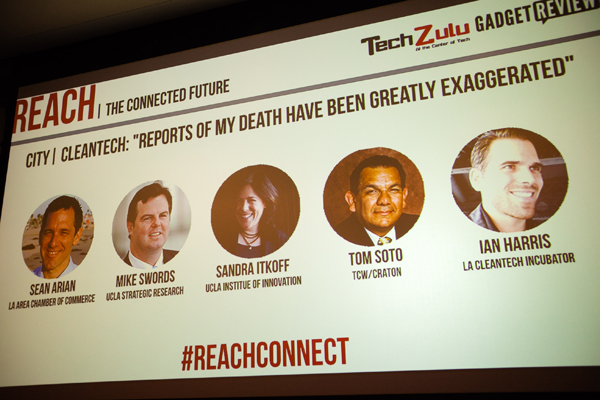 Today, the conversation on Cleantech with a panel of entreprenurs, doing work as local VC’s, university, incubators, and startups.

Moderated by Sean Arian, VP of Innovation, Sustainability and Emerging Technology @ the LA Chamber of Commerce, this conversation was an inside opportunity to dispel the myths surrounding the Cleantech industry. Collectively, the panel spoke on behalf of the Cleantech industry, standing firm, to state that:

“Reports of my death have been greatly exxagerated”

Tom Soto, of TCW/Carton opens the discussion for us. General sentiment in recent years has been that solar and wind hasn’t been doing as well as it needs to. Tom comments on the state of affairs as someone in the trenches, investing real dollars. He sees that with Cleantech and sustainability, they’re really in the 3rd or 4th generation in an investment sense.

According to Tom, the recession has indeed had a long term effect on the investment environment, but he assures us that by looking at the data, the sustainability sector is growing, robust, despite not being as large as it was before. He reminds us that there was also a time when major companies like Washington Mutual, and Linen ‘n’ Things toppled.

Ian Harris, VP of local Cleantech incubator believes ‘Cleantech’ is now more a political term than a technological definition. He and Tom take a moment to to describe the sustainability sector as a whole and what else goes in it. It’s not just environmental and only considering things like solar and wind, really do the overall industry  disservice.

“Sustainability is about developing an investment focus around social economic benefits that occur from capital solutions.“

They point to a number of examples like Revolution Foods, a Berkeley based company who provides locally sourced, organic food to school children. In business ventures of these types, it’s important to consider the overall environmental, social, and economic impacts resulting from choosing locally sourced suppliers (less mass travel), and of course, health benefits to children. 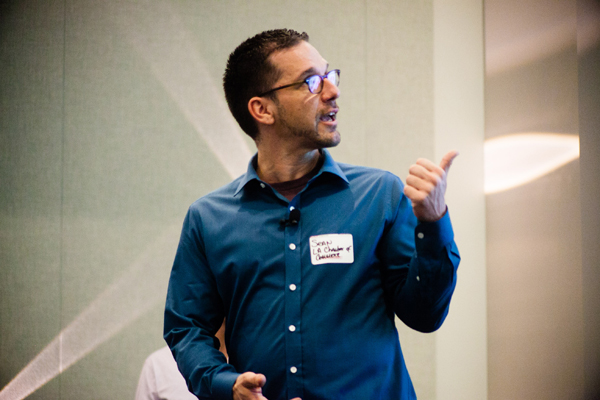 As consumers, it’s easy to gloss over the impact that technological advances have had over the years in carbon reduction. Though production does yield carbon output, Tom believes in the long run, just being able to carry vast amounts of data in electronic form has allowed hundreds of thousands of acres (of forest) to remain intact – as well as all costs associated.

In turn, these saved resources have also converted into good economics, for the sake of good economics in the form of saved production and operation costs.

Back to a previous topic, Ian talks about sustainability and its many faces. Sustainability is comprised of the many facets of everyday industry: energy, water, advanced materials, advanced manufacturing methods, mobility, etc. Some things you might not consider on a regular basis:

The difference here, is that these companies chase after double, or even triple bottom lines: offer better solutions, make money, and/or increase environmental sustainability.

The Importance of Sustainability

Why are we seeing more companies choose to move in this direction? Bluntly, it’s because we’re identifying real, tangible problems now. Tom explains that climate change is no longer abstract. We’re aware of the drought warnings, we see that California has turned into a tinderbox. It’s no longer speculative. Climate change is default with policy makers and business owners knowing where we’re at and seeing the need to take action. 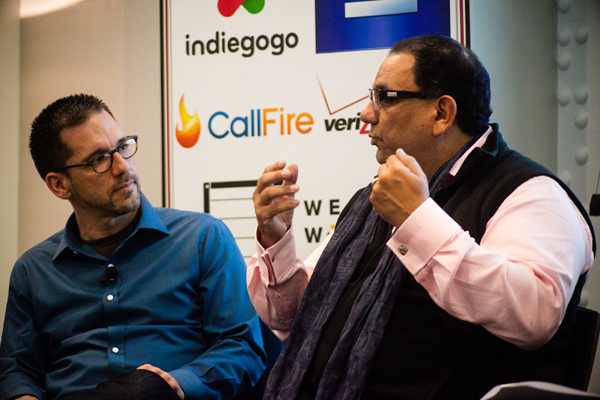 The floor opens up to Sandy Itkoff. As a Resident Entrepreneur at UCLA’s Institute for Innovation and Technology Transfer, she spends her time on working on the investment side of new, emerging technologies.

She hints at closing a major $6M round (details left out) in capital intensive technology, but also notes a major difficulty she’s experienced in getting meat and potatoes technologies adequately funded because of their capital intensive nature. In simple terms, developing state of the art materials costs a lot of money.

She also notes a major need to replace much of the industry’s technology infrastructure, and that alone costs a lot of money.

Tom supplements with his own explanation of where the money is, and where it’s going. To him, there’s a lot of money on the table for things like clean web, but if there aren’t any meat and potatoes projects, the whole system isn’t as effective. The conversation turns towards a major elephant in the room, government money.

Government funding is for lack of better words, a tricky endeavor.

Our investment gurus advise against getting behind technology that needs the government’s support because in the end, new technologies need to help people save money, or make processes better. However, they remind us that (generally, in the US) other sectors have been propped up by the government in embyronic stages (fossil fuel subsidies, etc.), and that many companies on top started off as small businesses too.

Generally, the government doesn’t use the word “subsidies”, but prefers job creation. Job creation to the tune of $500B dollars worldwide. 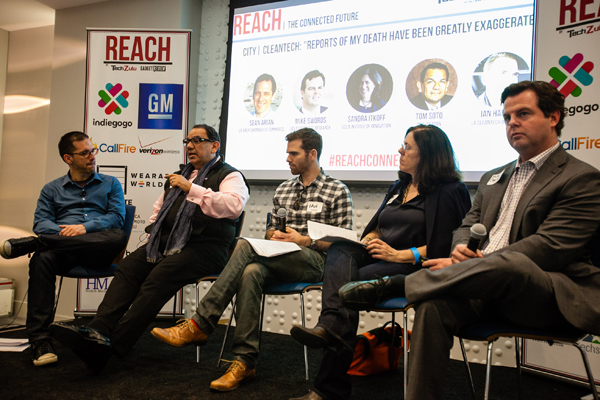 Through an Academic’s Eyes

Mike Swords takes a moment to talk about some of the work coming from the academics side. The work he performs is a mixture of research and enterprise, with UCLA being a hotbed petri dish of industry. He explains that climate change has definitely driven a lot of the issues and created the need for sustainable technologies.

He believes university systems aren’t simply a source of academic research, but are themselves, innovative ecosystems. Between Caltech, USC, and UCLA, $1 billion has been put into research expenditures. The goal here, is for the money to translate into tons of intellectual property –> commercialization –> then new jobs.

UCLA itself has been prodigious in patent filing, and recently launched their own VC fund. He alludes to UCLA Grand Challenges, a locally grown initiative that is looking to build a global team and use $150 million in the next five years to solve major goals in preparing for climate change:

He believes that Universities are regional assets that need to be leveraged more often. Fun fact: UCLA has pushed over 100 startups through its doors in the last five years.

Cleantech is About Connecting

Ultimately, the panel agree that ‘Cleantech’ is about making connections. Connecting investors to researchers, connecting double-bottom-line entrepreneurial ventures to their customers, etc. And while LA is, for lack of better words, a gargantuan economic powerhouse (18th largest economy in the world), our notoriously sprawled foot print has been a challenge in itself.

How do you connect business interests, the needs of 10 million people, government entities, and the work of huge universities systems (USC, UCLA, Caltech, CSUN, and CSULA) together?

Ian believes that with the Cleantech LA Incubator and other sustainability focused initiatives, we now have a solid platform to connect the puzzle pieces together. He also tips the hat to Mike and UCLA’s innovative work in modeling the climate change for the area. And in this cacophony of industry, money, and social/economic needs, we’ve gone from a cleantech industry to sustainability. Which as we’ve seen today, covers a lot of ground. 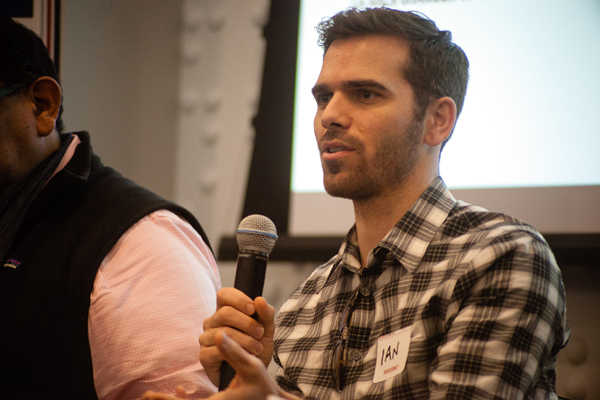 Moral of the Story?

Cleantech, sustainability, whatever you may call it is alive and well. Our panel goes into a final five answer speed round, to tell us what they believe is the coolest tech, they’ve seen to date: