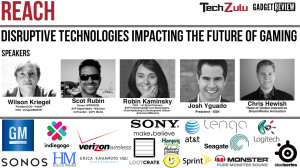 Tonight starting at 7:00pm PST we will be streaming and bringing you all the action live from Cross Campus in Santa Monica.  Make sure to tune in!

TechZulu & Gadget Review present REACH. A quarterly event series seeking to dive deep into what comes next in technology, and giving you the opportunity to experience it first hand with the gadgets on site.  Experience gadgets from the big brands with million dollar budgets to the startups bootstrapping and raising via IndieGoGo.

On October 24th tech enthusiast will come together to discuss the latest in Disruptive Technologies Impacting the Future of Gaming.

Gaming is about to take a decisive turning point thanks to smartphones, tablets, next-gen consoles, and digital downloads.

The REACH event will bring together some of gaming’s most influential thinkers, creators, and developers who will guide us through their vision of the next evolution of gaming.  It will also be followed by a complimentary Food/Beverage mixer, where we will have a variety of gadgets on hand for attendees to experience some of the newest in hardware. 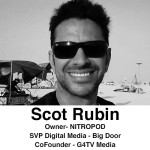 Scot has been an entrepreneur and executive responsible for the launch of several interactive entertainment ventures. As a consultant for Comcast and co-founder of G4 Media, Scot helped bring the world of video games to television in 2002. At G4, Scot served as VP of Program Editorial and Internet, and developed, Produced, and Hosted G4TV.COM, the network’s interactive talk show.

Before G4, Scot founded All Games Network (AGN). AGN was sold to Net-TV pioneer Pseudo Programs and Rubin served as VP of Games and Sports programming. In that position, Scot served as Executive Producer of the QB Club Chanel, a joint venture with the NFL. 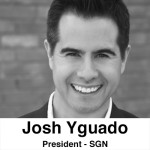 As President of Game Development and Operations at SGN, a leading cross platform game developer and distributor, Josh Yguado is responsible for development, marketing, and operations for all games. He also leads mergers and acquisitions and ran the acquisitions of SGN, MindJolt and HallPass Media.

Yguado is a co-founder of SGN, previously in charge of game development and responsible for successful cross-platform titles including Panda Jam, Jewels of the Amazon, and Bingo Blingo. He joined SGN from Fox where he was Vice President of Business Development and worked on the acquisition of MySpace and the launch of Hulu. Yguado previously held strategic planning and corporate development positions at MTV/ Nickelodeon and Univision. He has an MBA from Harvard Business School and graduated with honors from Harvard University. 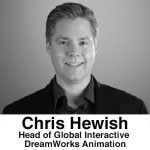 Chris is a 22 year veteran of the interactive gaming industry. He decided to enter the video game business out of a love for all types of games, and the powerful influence the local hobby store had on his childhood in Maine.

Chris currently serves as Head of Global Interactive for DreamWorks Animation. Prior to joining DWA Chris worked at Activision Blizzard for 13 years, during which time he held a number of role including Executive Producer and Lead Game Designer. Before working in California, Chris worked for Maryland based game companies MicroProse and Games Workshop. 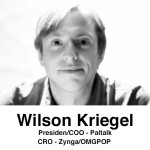 Wilson is the President/COO of Paltalk, a profitable leading live social interest/topic & content based video and chat community, with millions of active users a month, cross platforms.  Paltalk enables for an unlimited number of users to broadcast/view and chat within the same group. It generates revenues through Subscription, Virtual Currency and Advertising.

Wilson joined Paltalk from Zynga/OMGPOP where he was Chief Revenue Officer of the New York City based developer/publisher social mobile games company, which was sold to Zynga in 2012 for $210 Million. 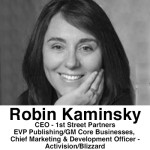 Robin Kaminsky is the CEO and cofounder of 1st Street Partners, Inc. 1stStreet Partners provides strategic management services to technology, entertainment and consumer goods companies.  Robin is also an Executive-in-Residence at Rustic Canyon Partners, a venture capital partnership, an independent Director on the Board of Trion Worlds (MMO and on-line game services and content company) and Wild Planet Entertainment, a toy company, an advisor to MachineZone (mobile, free to play games),  ICS (mobile and on-line acquisition platform), and 7 Elements (free-to-play, on-line games). Robin is a former advisor to Gai Kai (acquired by Sony in 2012), an on-line technology company.

Prior to founding 1st Street Partners, Robin was the Executive Vice President of Publishing and the executive leading the global games business at ActivisionBlizzard where she oversaw all studio/product development and marketing/business operations, doubled revenue and delivered record profit from 2005 through 2008. From 1997 through 2005, Robin was a marketing executive and general manager at PepsiCo.  Earlier in her career, Robin held strategic planning, brand management, new product development, and marketing services roles at The Coca-Cola Company, Revlon, and Johnson & Johnson.  Robin began her career at DMB&B, at the time a top ad agency in New York. She received a Bachelor of Arts degree from the University of North Carolina at Chapel Hill.

So now is the time to step up and embrace what is truly the next iteration in gaming.

We’d like you to participate in this important conversation.

Now all we need is YOU to:

Partner with us! (Get A Demo Table)

We currently have sponsorship slots open If you would like to be part of this amazing event and show your support for Community. Contact us at sponsor@techzulu.com.