TechZulu is excited for the coming #TZWeek at the end of April.  We will be taking you for a tour of the LA Tech Scene.  Starting off in Santa Monica at ROC for a fireside chat with CBS Interactive, then heading to Westwood at UCLA for Spotlight: LA Tech, and ending at NextSpace / Amplify LA in Venice for TechZulu Final Friday.

There will be plenty of FREE Pizza & Drinks! 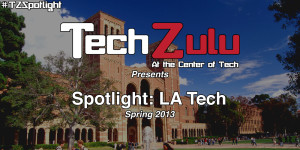 TechZulu is ramping up to do it all again with an all new group of companies and a SuperDemo.  This could be your company’s chance to shine in the Spotlight.  We invite you to Apply Here and let us know all about your company and what you would like to put in the Spotlight.  join us in proving there’s more than one place in California to create great technology. If you’d like to present, APPLY HERE.  Entries will be closed for company submissions at midnight of April  17th, 2013.

This Spotlight takes place Thursday, April 25, at UCLA Korn Hall. The evening will consist of a series of live stage demonstrations guaranteed to impress and inspire new ideas among all in attendance. Followed by a FREE cocktail and apps reception for all attendees. 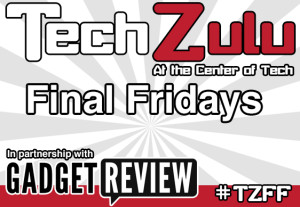 Held the last Friday of every month, TechZulu Final Fridays (#TZFF) are a creative blend between networking event, startup showcase, and community celebration. Join us April 26th at NextSpace / Amplify LA as we introduce you to featured faces and spaces across our great city, highlighting the many flavors of innovation that make up the LA tech ecosystem…plus plenty of free food and drinks.

Giving Startups The Coverage They Deserve
Each month, TechZulu offers a handful of hot startups an opportunity to debut to the greater LA Tech community for FREE. That’s right. This is not a pay-for-play; it’s a talent showcase. Apply now!  Companies will be notified once selected.

Mentorship Speed Dating From Influentials Within The Community
As an added value add for those companies who are chosen, we are giving them one on one time 2 hours prior to the event with influentials within the community such as; Investors, Seriel Entrepreneurs, Lawyers, Accountants, Marketers, PR, and much more.

We currently have sponsorship slots open If you would like to be part of these amazing events and show your support for the community & TechZulu.  Contact us at sponsor@techzulu.com.