GoPro brought the world a simple unique first person point of view videos to YouTube and other online video sites. The smartphone brought a lot of Instagram and Vine feeds to the world of social media. Videos are obviously in the hands of the everyday person, but the tech that they use put a limit on what can be done. VSN Mobil presents photographers and videographers a new way to capture images and videos with the V.360.

Photographers and videographers can only capture what they see in front of them. V.360 changes that perception and allows them the ability to shoot and record 360-degree images and videos. A unique feature allowing panoramic images to be easily made and taking out the extra work of compiling and stitching images together.

“We really wanted something to capture 360-degrees. Up until now, most cameras have multiple images and stitch them together to get the full circle. We never liked the quality of that. I call it ‘the Franken picture’, it looks like Frankenstein stitched together, says Matt Gordon, VP of development at VSN Mobil. Matt Gordon continues saying, “No one really found a way to line them up perfectly, so it doesn’t look like Frankenstein. We set out to solve that problem with the V.360.  The V.360 is an incredible camera. We were able to capture a full donut using a single image.” 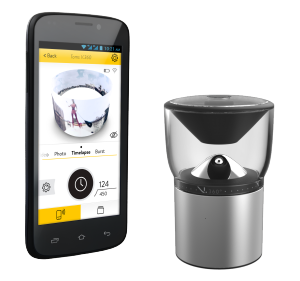 V.360 can capture panoramic images at 8 megapixels. Videos is what V.360’s really all about by capturing video at angles not possible with a typical camera. The camera captures videos at a stunning 6480 x 1080 resolution and at a frame-rate of 30 frames per second delivering stunning quality videos.

Images and videos are stored either on a microSD card or uploaded through Wi-Fi connectivity to another device. The camera also comes with an HDMI v1.4a and a microUSB 3.0 port for easier access. A remote control is also included to control the V.360 or a smartphone can also be used as remote through Bluetooth 4.0 connectivity.

To process videos and images quickly, the V.360 is paired with a Qualcomm Snapdragon 800, Adreno 330 GPU and a 16 megapixel sensor. A built-in GPS, accelerometer, barometer and altimeter sensors help add contextual information for each video and image as well.

An app is available for both iOS and Android systems. The app allows you to view, share, and manage all the videos and images straight from the smartphone.

“We have a compliment app on the iOS and the Android that will be with this device as a viewfinder. As you set up the camera and you want to shoot live video or live images, you can see the full donut on the application with a flick of a finger and lay out the image completely flat,” says Matt Gordon. He continues on saying, “Also, from the application you can snap images and do basic editing of the video which can be uploaded to social media.”

The camera may not look rugged, but don’t let the good looks fool you.  The camera is rated at military standards and received a rating of IP67; meaning it is shock, dust, vibration and water resistant (for up to 1 meter for 30 min.) right out the box. Adventuring with the V.360 is a must and it can withstand most of the outdoor elements. 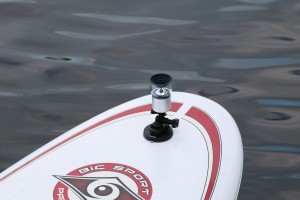 Other cameras in the market provide better angles, such as a 360-degree sphere view. Other cameras are more rugged straight from the package. What the V.360 looks to provide is a greater overall experience. Another great feature of the V.360 is the versatility it provides thanks to the ability to mount to many camera and GoPro mounts. No need to go buy and carry extra equipment or specialized V.360 mounts. Often others don’t offer this kind of versatility, making the V.360 a cheaper option with a wider range of attachments for the creative minds.

VSN Mobil is creating a very sleek looking camera with the versatility and ruggedness to be used in almost any situation. The unique 360-degree donut images and videos allows the camera to cover angles where other cameras would require multiple units and equipment. There are cameras that have a better capture angle or a tougher device, but V.360 looks to create a better overall experience with its camera and the app for photography and video enthusiasts.

VSN Mobil is releasing the V.360 in October 2014 and offers a discount code to those signed up for their newsletter.