Advertising your brand utilizing YouTube could increase revenue by millions in under a year. Billion dollar brands like GoPro built their empire marketing with video, but we don’t all have a sea of extreme sports athletes to upload thrilling footage. So here are the top 8 tips from 2 successful brands on what we can do to create engaging content and market our brands using YouTube as our platform.

Orapup Sold $1 Million In Merchandise Before Going Into Production.

Jeffrey Harmon says a brand MUST have a distribution strategy. That as a business it is impossible to build your brand without an adwords strategy or partnering into a YouTubers existing audience or having a robust email list.

To rebut that only teens watch YouTube he said that, “There are a lot of 45 year olds on YouTube”. In fact one YouTube market waiting to be dominated is Mommy bloggers. No one has yet to rule that space.

2.  Become the demographic you want to market to.

3.  Think about how you would sell in person. Practice on your friends and pitch selling them on your concept and perfecting the pitch.

Billy Mays was doing road shows for 12 years perfecting his pitch before he actually took Orange Glo, Kaboom and OxiClean to TV.

4.  Figure out how to translate the core parts of that in person pitch into a good script.  You may need to hire a good script writer. If any ideas in the script take away from the core message selling the product it will hurt the effectiveness of the video.

5.  Shoot a video made specifically for YouTube. This means tight shots and lots of jumps. Don’t worry about major production value, but you do need great audio and clear messaging.

6.  Get likes and subscribers. 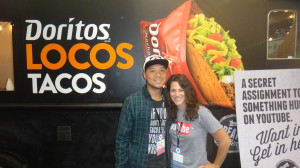 7.  Don’t put on a mask before you engage. Treat the brand as though it’s you and treat the audience as though they are your friends.

8.  Embrace the idea of transparency and realize it is something that is going to make a better brand.

There are many paths you can take to develop a robust YouTube channel in order to market your brand from creating a one time hit like “Hello Flo” and “Dollar Shave Club” did to creating a consistent web series. Evan Bregman, Director of Digital Media at Electus said, “If we wanted to cut through the clutter of all the different YouTube channels …. we needed to have loud content.” So they created the “Loud Network”, a variety of multicultural web series featuring content on lifestyle and music targeting males 18-34 years old. Orabrush also created a web series called “Diary of a Dirty Tongue”. Overall, when creating content, remember in the YouTube culture audience is always first, not your brand, so think about what your future subscribers want to see.